NFL futures odds have hit a boiling point as we are now in Week 18. Here's the latest look at NFL playoff odds, plus division and first-round bye clinching scenarios, headlined by a Chargers-Raiders winner-take-all showdown.

Here we are: Week 18, where the NFL futures odds have reached a climax in the final week of the regular season.

There are three playoff spots, two division titles, and one first-round bye still available as teams get ready to make a run for the Super Bowl.

But let's not get ahead of ourselves. You need to walk before you run, and some teams still need to qualify for the playoffs before they can dream about the bigger prizes.

Here's the updated look at where each team stands and their odds to make the NFL playoffs (and more) in the final week of regular-season action.

How the odds work is very simple: "Yes" means that they advance to the NFL Playoffs (as a division champion or a wild card), while "No" means they miss the postseason... so better luck next year.

Odds courtesy of DraftKings as of January 4, 2022.

The Titans, Chiefs, Bengals, Bills, and Patriots have all punched their ticket to the postseason, meaning five of the seven AFC playoff spots are accounted for.

For the remaining two spots, the Colts have the best odds to advance, needing to simply win against the hapless Jaguars in Week 18. The Chargers and Raiders control their destiny — as they face each other and the winner gets in — while the Steelers and Ravens need to win... plus a little help.

Here are the current AFC playoff standings, with each team's current record, remaining schedule, and most logical route to a playoff spot and/or first-round bye, where there are technically five teams fighting for two remaining playoff spots.

Like the AFC table, "Yes" means that they advance to the NFL Playoffs (as a division champion or a wild card), while "No" means their season ends after Week 18.

Odds courtesy of DraftKings as of January 4, 2021.

San Francisco is favored to grab it at -145, although it is in tough against a Rams team still needing a win to clinch the division. If the Niners falter, the Saints (+110) can sneak in by defeating the already-eliminated Falcons.

As mentioned above, six teams are already in, with two teams still vying for the final spots.

The NFL Playoffs expanded prior to the 2020 season and will run the same format in 2021, with 14 teams in the postseason — seven from each Conference.

In each conference, the division winners will comprise the Nos. 1-4 spots, while the Nos. 5-7 spots will come via wild cards. The top seed in both the AFC and the NFC will get a first-round bye, with the other matchups proceeding as follows:

After the first round, the No. 1 seed will face the lowest remaining seed in their conference, while the other two teams will square off. Those winners will meet in the conference championship, and then the winners of those games — the AFC and NFC champions — will meet in Super Bowl LVI on February 13, 2022 at SoFi Stadium in Inglewood, CA. 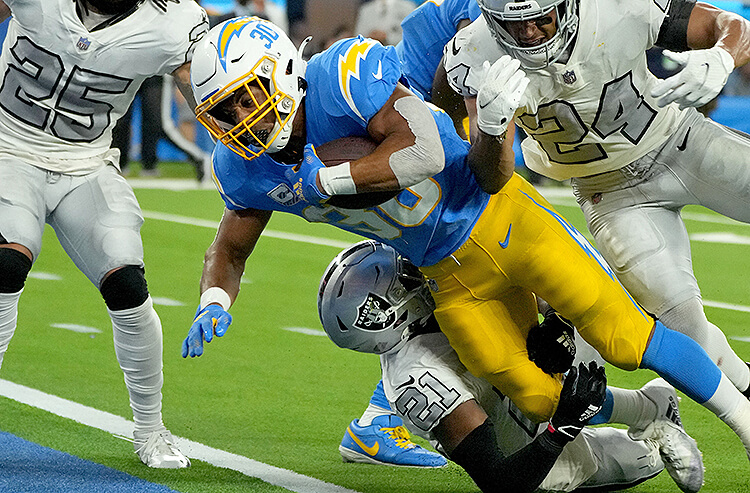