Giants vs Eagles Week 16 Picks and Predictions: Glennon, Giants No Match for Philly

If we know anything about the Eagles, it's that they beat up on bad teams — and fortunately for Philly, the Giants have been amongst the NFL's worst lately, making this 10-point spread more appealing than it may appear. Read more in our NFL preview below.

This NFC East clash sees the Giants travel to the Linc to face the Eagles who still have faint hopes of reaching the playoffs. The Giants are out of contention but every game against division-rivals matters and the franchise will look to finish the season strong.

Can the Eagles do enough to secure the W? Don’t miss our NFL picks and predictions for the New York Giants vs. Philadelphia Eagles.

There’s been no movement at all since the lines opened. The total has remained at 40.5 and the Eagles are still very strong 10-point favorites.

The Eagles are 4-0 ATS in their last four games following an ATS loss. Find more NFL betting trends for Giants vs. Eagles.

Giants vs Eagles picks and predictions

The Cowboys ran away with the NFC East and it’s been a difficult season for both the Philadelphia Eagles and New York Giants, but they’ll both be looking to end the season strong. In particular, the Eagles who at the beginning of this game week still have a 31% chance of making the playoffs.

Both teams have quarterbacks who are heavily under scrutiny. Jalen Hurts may have been a great fantasy football asset but he’s got a number of question marks from the Eagles' fanbase who still haven’t been convinced that he’s a franchise QB. Daniel Jones has been put on IR due to a neck issue meaning Mike Glennon has been given the keys to the offense. Before his injury, it was another mixed season from Jones with many, correctly in my view, asking if he should be part of the rebuild.

Mike Glennon has played for the past three weeks, losing each game and generally performing pretty badly. Against the Cowboys, Chargers and Dolphins he’s thrown for a combined two touchdowns (all against the Chargers) and five interceptions, and his highest QBR in that entire time has been 20.1.

The Eagles are still in contention for the playoffs but it’s hard to tell exactly how good this team is. They’ve won four of their last five but in that time they’ve beaten the lowly Jets and managed to get past a Washington team on Tuesday who was missing a lot of their talent, and they even lost to the Giants a month ago in a low scoring 13-7 game. Despite that, they’ve managed to comfortably beat both the Saints and Broncos by more than a score.

Despite the .500 record and question marks around Jalen Hurts, this offense is ranked seventh in offensive DVOA. That puts them ahead of the Bills, Colts and Cowboys and perhaps tells you that this team is better than their reputation. They’re ranked 21 spots higher than the Giants, showing the gulf in class between both offenses.

Defensively, things are closer between the two teams with the Giants 19th in defensive DVOA and the Eagles five spots back in 23rd. Despite that, the Giants have given up more points than the Eagles throughout the season.

So how will the game go? With the injury to Daniel Jones, you’d expect the Eagles to be able to win. They may only have a 2-4 record at the Linc but the Giants are 1-6 on the road and are now without their first choice signal-caller.

The spread here is pretty big, a huge 10 points, but interestingly across their seven wins this season the Eagles have won six of the seven by 10+ points. They have faced some bad teams admittedly but it perhaps shows that when the Eagles are firing they are able to put teams to the sword.

The Giants are knocked up, tired and a team devoid of ideas. Their defense is strong enough to be able to help them compete, especially if Kadarius Toney and Saquon Barkley get fed the ball, but in all likelihood, we’re going to see a comfortable Eagles win in which they cover the spread.

This Giants' offense hasn’t been great all year and since Mike Glennon took the reins they’ve been even more stagnant, so the immediate thought is that the Under would be the safe play here.

The trends back this up also. When these two teams met at the end of November the game only saw 20 points scored. That was under a month ago and the Giants certainly are weaker than they were.

The Under has gone 4-0-1 in the Giants' past five games against NFC opponents. In addition, it’s also 6-1 in their past seven games in December, showing that they’re often lower-scoring when their season is effectively over.

Not only that but the Under is 13-3 in the Eagles' past 16 games at the Linc when facing a team with a losing road record.

Don’t overthink this, everything is pointing us towards backing the Under and despite it being the lowest points total on Sunday, we need to take it.

This hasn’t been a great year for Miles Sanders truthers. Playcalling saw him underused earlier in the season for the Eagles and then he was injured, all of which have combined for a bad year for the once-promising back.

He’s now re-established himself as the lead back, albeit in a committee, but he led the Eagles in carries (18) and yards (131) in Tuesday’s win over the Washington Football Team. The problem for him however is Jalen Hurts. Hurts scored two touchdowns on his eight carries and has been a consistent vulture all year with 10 rushing touchdowns to his name, only one less than Jordan Howard, Boston Scott, and Kenneth Gainwell combined.

You’ll notice Sanders' name was missing there, despite leading the team in carries, nearly double that of his nearest rival, and yards, he’s yet to find the endzone. In fact, no player in the NFL has had more touches this season without a touchdown. Nobody else in the entire league has more than 75 touches without a TD while Sanders has 155. Sanders is currently a huge outlier and one that is surely set to change, especially when he’s getting fed the rock a lot. With the Eagles likely to be up on the Giants you can expect them to run the ball frequently, which will only boost his chances further. 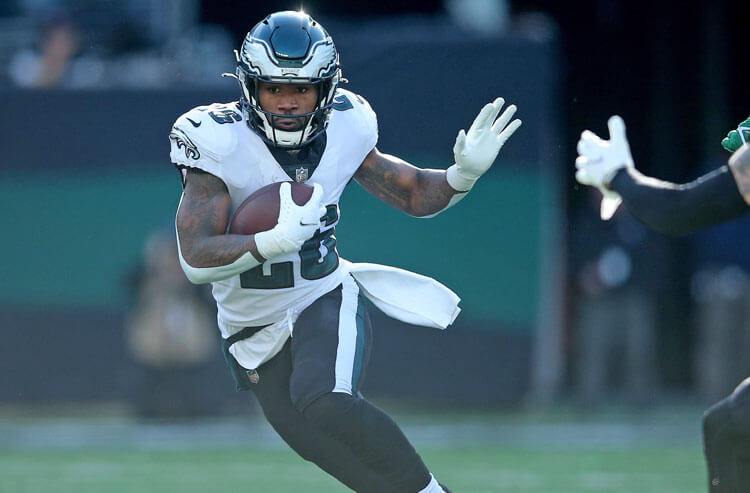 Giants vs Eagles Week 16 Picks and Predictions: Glennon, Giants No Match for Philly
Provided by

Indianapolis Colts Odds, Predictions, and Betting Preview 2022: As Luck Would Have It
Jason Logan | Aug 16, 2022