Lions vs Falcons Week 16 Picks and Predictions: Fading the Goff-less Lions in Atlanta

The Lions managed to take down the Arizona Cardinals last week and will look to make it back-to-back wins for the first time this year. But they may be without Jared Goff — which has us leaning on Atlanta in our NFL Week 16 betting picks and predictions.

The Detroit Lions are coming off their second (and biggest) win of the year and head to Mercedes-Benz Stadium to take on the Atlanta Falcons in Week 16 of NFL action on Sunday. With quarterback Jared Goff unlikely to suit up for the Lions, NFL betting lines have the Lions as 5.5-point road underdogs for this Boxing Day contest.

With Atlanta needing to win out and get a bunch of help to make the playoffs, here are our best free NFL picks and predictions for Lions vs. Falcons on December 26.

The line for this game opened with the Falcons installed as 4.5-point favorites with the Over/Under at 44. With news that the Lions will likely be without their starting quarterback, the line grew to Atlanta -5.5 while the total trimmed down to 43.

The Under is 5-1 in the Falcons' last six games overall. Find more NFL betting trends for Lions vs. Falcons.

Lions vs Falcons picks and predictions

The Falcons are fresh off a 31-13 loss to the 49ers to drop their season record to 6-8 SU and ATS. They still have a 2% chance of making the postseason but will need to play much better after going 2-4 SU and ATS in their last six games.

After waiting until Week 13 to get their first win of the season, the Detroit Lions now have a pair of victories after upsetting the Cardinals 30-12 as 13-point underdogs last week. Despite having a roster lacking in talent and decimated by injuries, the Lions have been playing hard recently and have covered the spread in five of their last six games. Unfortunately, the forecast this week doesn't look much better with quarterback Jared Goff likely to miss out after testing positive for COVID on Monday.

Under the league's new relaxed rules for vaccinated players, Goff still has a chance of being cleared in time for the game but it seems more likely that Tim Boyle or David Blough will get the start. Either passer is a major downgrade from Goff who had been efficient in his last four games.

Blough made five starts for Detroit in 2019, completing 54% of his passes for just 196.8 yards per game. Boyle made his first career NFL start in Week 11 against the Browns and completed 15 passes for a pathetic 77 yards with a pair of interceptions. Boyle was a mediocre college QB at Eastern Kentucky and UConn and honestly, I'm not even sure how he got into the league.

The Falcons have a Bottom-5 offense when it comes to weighted DVOA and success rate, but at least they have a competent QB in Matt Ryan. The former MVP is completing 67.5% of his passes for 3,340 yards and 18 touchdowns and while he doesn't have the best weapons at wide receiver, he does have a talented tight end in rookie Kyle Pitts.

The Lions not only have an even worse group of receivers but they'll be missing their own productive tight end after T.J. Hockenson underwent season-ending surgery last Thursday.

Both of these teams have been awful on the defensive side of the ball, with Detroit ranked 29th in defense DVOA and Atlanta 31st. Although the Lions have been playing tougher defense lately, it's tough to back them on the road with such an ugly situation at quarterback and injuries piling up on both sides of the ball. We're leaning towards the Falcons but would recommend waiting until closer to kickoff to ensure that Goff isn't playing.

As bad as these defenses have been, the offenses have possibly been even worse. The Falcons are 30th in the league in Success Rate, while their ground game ranks 31st in rush DVOA.

Until Goff started heating up in December, the Lions had averaged a pathetic 14.4 points per game in their previous 10 contests.

One area where the Lions have gotten healthier is at running back where Craig Reynolds, a former undrafted running back from Kutztown University, emerged in the absence of Jamaal Williams and D'Andre Swift. Williams has been activated from the COVID list while Swift is trending towards making his return as well, which makes it likely that coach Dan Campbell will lean on his ground game as much as possible.

With Goff at QB, the Lions' offense was more conservative than a NASCAR crowd. Without him, they'll be unwatchable. Take the Under.

I almost took the Lions in my ATS prediction but I simply don't trust either of their backup quarterbacks. That said, their scrappy play on defense in recent weeks makes me think that the Falcons will also struggle to put up points.

Since Week 10, the Lions have held opponents to 16 or fewer points on four occasions while ranking a respectable 15th in the league in success rate.

The Falcons have scored more than 21 points just once in their last six games, averaging 13.8 ppg during that span. In the only contest where they went above that number (29 points versus the Panthers) they totaled a modest 318 yards and benefited from a pick-six. With the Falcons team total set at 24.5, the Under looks worth hammering. 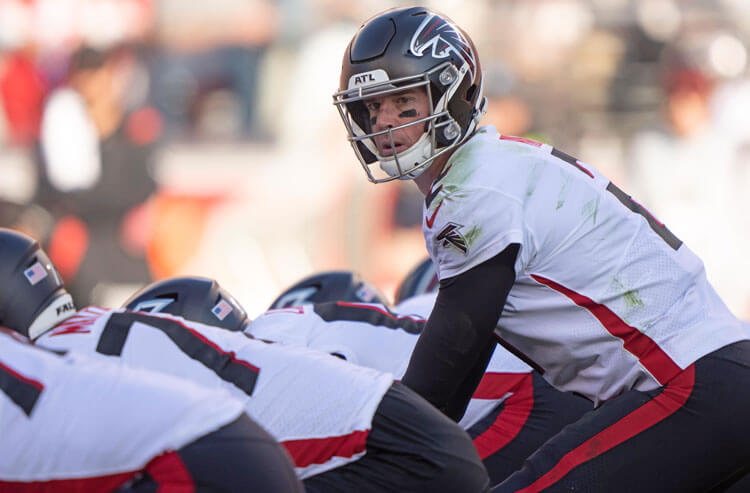 Lions vs Falcons Week 16 Picks and Predictions: Fading the Goff-less Lions in Atlanta
Provided by