Eagles vs Panthers Week 5 Picks and Predictions: Philly Puts the Hurt On

Carolina took its first loss of the season in Week 4 and will have to try and bounce back against Philly. But being a favorite hasn't suited these cats well — find out more with our Eagles vs Panthers picks.

The Carolina Panthers attempt to rid the nasty taste of their first loss of the NFL season in Week 5, taking on another NFC East opponent in the Philadelphia Eagles.

The NFL betting odds have Carolina as a 4-point home favorite but early play on Philadelphia is starting to slim that spread midway through the week. The Panthers defense had some holes poked in it by Dallas last weekend while the Eagles succumbed in a shootout with Kansas City.

Here are our NFL free picks and predictions for Eagles at Panthers on October 10.

Carolina opened as big as 4.5-point home chalk for Week 5 and that spread slimmed as low as -3.5 as of Wednesday morning, with some books still dealing Philadelphia +4 (-116). The total for this game hit the board at 46 points and has trickled down to 45.

The Panthers are 1-5 ATS in their last six games as favorites. Find more NFL betting trends for Eagles vs. Panthers.

The Eagles switch gears in terms of opposing defenses, going from hanging 30 points on the Chiefs’ piss-poor stop unit to facing one of the most aggressive pass rushes in the NFL.

Carolina enters Week 5 as the top pressure team (getting pressure on almost 38 percent of opponent dropbacks) but runs into an Eagles offensive line holding its own, despite some injuries to key cogs.

Philadelphia was down tackles Jordan Mailata (knee) and Lane Johnson (personal) against Kansas City (both questionable for Week 5) and had to shake up their protection. They gave up only one sack and four QB hits and did a solid job making space for the run game, which picked up 103 yards on just 19 carries. Granted, the Chiefs are terrible versus the run.

Hurts has faced plenty of blitzes so far in 2021 – fifth-most in the NFL – yet has been pressured on only 25 percent of his dropbacks. He leads the league in hurries but has the wheels and athleticism to escape and make plays. Philadelphia also has a ground game picking up a league-best 5.4 yards per carry, which will keep the Panthers' pressure honest.

Carolina was exposed by the Cowboys' quick-hitting attack and rushing game in Week 5, failing to register a single sack after recording 14 in the previous three outings, and getting run over for 245 yards on the ground.

The Panthers also allowed Dallas to score touchdowns on all three of its red-zone trips in Week 4, a big soft spot for this stop unit which has allowed only six red-zone attempts but caved for six points on each of those stands. Philadelphia was just three for six in the red zone versus Kansas City but is nine for 13 overall (69%) inside their foes’ 20-yard lines on the season.

Carolina is desperately missing dynamic running back Christian McCaffrey, who is reportedly giving it a go in practice his week but is listed as questionable with a hamstring injury that sidelined him last Sunday. McCaffrey can pound for key gains, pick up third downs and help this offense control tempo and clock – a trademark of Joe Brady’s system the past two seasons.

Run CMC would be a big help for the Panthers considering the Eagles defense ranks among the worst in defending the run, giving up more than 150 yards on the ground per contest. Carolina should be able to get some traction even if McCaffrey is out, with RBs Chuba Hubbard and Royce Freeman. It runs the fifth-slowest playbook and leads the NFL in TOP (34:48).

Carolina is also coming out of the half ice-cold. The Panthers have scored only once in the third quarter this season – a touchdown versus the Texans – which is a trend going back to 2020, with the offense mustering a mere 17 total third-quarter points in the past eight games overall, including five goose eggs.

This could be an ugly game, with the Eagles keeping everything short and quick to avoid the Panthers pressure and Carolina chewing up clock on the ground against a soft Philadelphia run stop.

Hurts finished with 47 rushing yards against the Chiefs and threw a season-high 48 passes in an attempt to keep pace with the Chiefs scoring attack.

He won’t be as busy in the passing game versus Carolina but will find himself running for cover against the Panthers' pressure. Hurts put up 62 yards versus the Falcons in Week 1 and followed that with 82 yards on the ground against the 49ers.

Carolina has yet to face a true dual-threat QB like Philly’s this season, outside of limited snaps for Saints QB2 Taysom Hill, but did allow 35 yards on four scampers to Dak Prescott this past weekend. 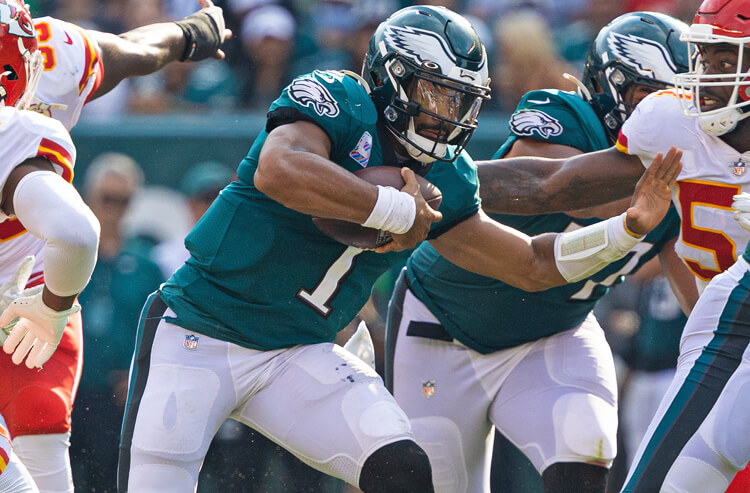 Eagles vs Panthers Week 5 Picks and Predictions: Philly Puts the Hurt On
Provided by