Dolphins vs Buccaneers Week 5 Picks and Predictions: Big Spread No Worry for TB

The Buccaneers narrowly escaped Week 4 with a win against the Patriots but fell to 1-3 ATS on the season. They are in a great bounce-back spot versus the Dolphins in Week 5, though, and bettors shouldn't be scared away from the double-digit spread.

While Tom Brady left Gillette Stadium without the statement victory he was looking for against the New England Patriots, despite coming away with the win, the Tampa Bay Buccaneers did bounce back from a Week 3 loss to the Los Angeles Rams.

Now they are back on home soil as large betting favorites against the Miami Dolphins in Week 5, but they enter the matchup only 1-3 ATS on the season. Can the Bucs cover the spread or will injuries to their secondary come back to haunt them?

Find out with our free NFL picks and predictions for Dolphins vs. Buccaneers on October 10.

We’ve only seen minor movement in the betting at this point. The total has moved from 47.5 points up to 48 and Tampa Bay have moved from 10.5 point favorites to 10 point favorites. Use the live odds widget above to track any future line movements right up until kickoff and be sure to check out the full NFL odds before placing your bets.

The Buccaneers are 5-0 ATS in their past five games against the Dolphins. Find more NFL betting trends for Dolphins vs. Buccaneers.

Tampa Bay did enough to beat the Patriots last Sunday, but Brady and the Bucs only won by two points against his former team and failed to cover the spread for the third time in four games this season. The Patriots are strong defensively, however, and Bill Belichick knows Brady well.

The week before that, we saw the Bucs get stunned on the road to the LA Rams, one of their biggest rivals in the conference. Don’t worry, though, we’ll see the Bucs get back to winning in dominating style this week.

The Dolphins have been a dumpster fire this year. Since narrowly beating the Pats in Week 1, they’ve put up a goose egg against Buffalo, lost Tua Tagovailoa to injury, and most recently fell to 2-2 after falling to the Colts as home faves.

Miami only managed to put up 203 yards on offense in that loss and just 35 of those were on the ground. The team struggled in every aspect of the game and was woefully inefficient on third down, on completing 3 of 11 attempts.

Though the Bucs have lots of injuries in the secondary, which is something that Miami’s bizarre co-offensive coordinators will look to take advantage of, it won’t be enough. Only one team— the New York Jets — has scored fewer points than the Dolphins this season, and Tampa Bay's defense is still talented.

The Bucs are the fifth highest-scoring offense in the league and should be able to exploit this Miami team. Look for Leonard Fournette to have a big game, as three different running backs have already rushed for 100-plus yards versus Miami this season. It doesn’t matter that the Buccaneers will be missing Rob Gronkowski — there’s still enough talent on this team to win by multiple touchdowns. Take Tampa Bay to cover here.

Tampa Bay has the fifth-best offense in the league per DVOA. But even if the Bucs score three or four touchdowns, as we expect them to, it won't be enough to eclipse the 48-point total because the Dolphins won’t do their share of the work.

Miami's offense has managed to score two touchdowns in three games and wasn't able to muster a single point against Buffalo. This isn’t a high-powered offense and the Fins will need their defense to score a defensive touchdown if there’s any hope of beating the Over. I’m confident in Brady playing smart enough to limit the chances of that happening.

Go against the public betting and take the Under here.

Tampa Bay might be hurting in the secondary but it is still as dangerous as ever up front. Vita Vea and Ndamukong Suh provide power down the middle and the pass rush is even scarier.

Dak Prescott, a QB known to be talented when rushing from the pocket, only managed 13 yards on four attempts in the season opener. Since then, Matt Ryan has the best rushing yard total against the Bucs — a lofty three yards. Mac Jones and Matt Stafford managed negative yardage on the ground in their games against the Bucs.

Jacoby Brissett is better with his feet than those two but his run game has been quiet, as he has managed eight yards on two occasions and only had one big game when he rushed for 37 yards against the Raiders, who aren’t on the same level as the Bucs. If anybody is planning on beating the Bucs, given their injuries, they’ll be doing it through the air.

Miami will be playing from behind and facing negative game script, so we're betting on Brissett going Under 14.5 rushing yards here. 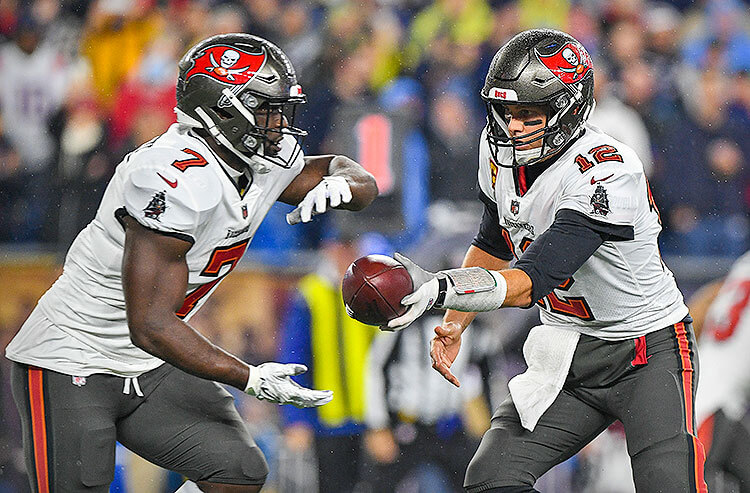 Dolphins vs Buccaneers Week 5 Picks and Predictions: Big Spread No Worry for TB
Provided by