Saints vs Washington Week 5 Picks and Predictions: Hit the Bye on a High?

Washington Football Team was the latest team to enjoy a Falcons collapse, while the Saints suffered a collapse of their own in Week 4. With the two pitted against one another in Week 5, how do we like it to play out? Keep reading for our picks.

The Washington Football Team pulled out all the stops to steal a victory from the clutches of defeat last Sunday but now host a New Orleans Saints team playing with a chip on its shoulder and one finger on the panic button in Week 5.

The 2-2 Saints are slight NFL betting favorites in the nation’s capital, currently giving two points to the Football Team. This will technically be New Orleans’ fourth travel game in the first five weeks after losing the home opener to the Giants in Week 4.

Check out our NFL free picks and predictions for Saints at Washington on October 10.

This spread came out as low as a pick’em but quickly shifted to Saints -1 and eventually -2 with the early play on the road team. The total opened at 44 points and has climbed slightly to 44.5 as of midweek. Use the live odds widget above to track any future line movements right up until kickoff and be sure to check out the full NFL odds before placing your bets.

Washington got the win in Week 4 but needed some wild plays and of course, those came against a Falcons franchise known for collapsing like a house of cards in a tornado.

Washington’s three second half touchdowns - a 101-yard kickoff return to open the second half, a desperation sky ball finding Terry McLaurin, and a 30-yard sideline scamper and dive over the pylon from J.D. McKissic – were all gifts from the football gods and came against a rotten Atlanta team, ranked 29th in defensive DVOA at Football Outsiders.

The Saints are a much stiffer test in Week 5, even on the heels of an overtime loss to the Giants at home. New Orleans ranks No. 2 in defensive DVOA and boasts an EPA per play of -0.081 – fourth-best in the NFL.

Injuries on both sides of the ball, as well as being displaced due to Hurricane Ida in September, has New Orleans up and down in the opening four games. However, this Week 5 matchup is a key point in the schedule for NOLA, which would love to take a winning record into a Week 6 bye.

The New Orleans offense has been the biggest letdown so far in 2021, which was expected with long-time QB Drew Brees trading out his helmet for a better hairline and a microphone. Sean Payton’s play calling is being questioned after a dud of a game in Week 5, but this Washington defense isn’t what it was last year.

The Football Team is ranked 29th in pass defense DVOA and allowing rival QBs to post an average passer rating of 106.8 through four games. New Orleans QB Jameis Winston had a solid effort against New York but was held back with Payton calling 39 running plays for 170 yards and leaving his quarterback to connect on 17 of 23 passes for 226 yards (9.8 yards per attempt).

Expect Payton to press a little more with the pass and test this WFT secondary. The Saints' defense will take care of the rest.

These head coaches know each other very well, going back to Ron Rivera’s days in Carolina. The Football Team has come up short of expectations on the defensive side of the ball in 2021 but did show some improvements up front in the win over Atlanta.

This vaunted defensive line, which was the backbone of last season’s stop unit, was able to snuff out the Falcons’ ground game and despite sitting at the bottom of most defensive metrics, the WFT allows a rushing success rate of 37.1 percent (10th) and 4.0 yards per carry. That comes in handy facing a NOLA playbook handing off on almost 58 percent of snaps.

As for Washington’s offense, QB2 Taylor Heinicke has overperformed expectations since taking over for the injured Ryan Fitzpatrick in Week 1. However, teams are getting more tape on the former Carolina QB and New Orleans’ stingy run defense will put the game on Heinicke’s shoulders.

More than half his passing yards have come after the catch, with Heinicke boasting a measly 4.0 completed air yards per reception. The Saints have been susceptible to longer passing plays, due to a lack of pressure on the QB, but should be able to keep everything in front of them on Sunday. Heinicke could also be without safety blanket TE Logan Thomas (hamstring) after he left Sunday’s game.

If Washington does manage to move the chains, it will run into a NOLA red zone defense giving up touchdowns on just three of its nine red-zone stands, ranking No. 4 in red zone defense and goal-to-go DVOA.

At some point on Sunday, Sean Payton has got to let Jameis loose. The Saints pass less than any team in the NFL right now despite Winston having a solid start as QB1 in the Big Easy.

The former No. 1 overall pick has a passer rating of 106.4 with eight touchdowns and only two interceptions, yet he’s topped out at 23 passing attempts – coming last week against the Giants.

With the Washington defensive line slamming the door on the run game but the secondary missing CB Torry McTyer and giving up a league-high 848 air yards, the Saints will need to pass more if they’re going to get right before the bye. 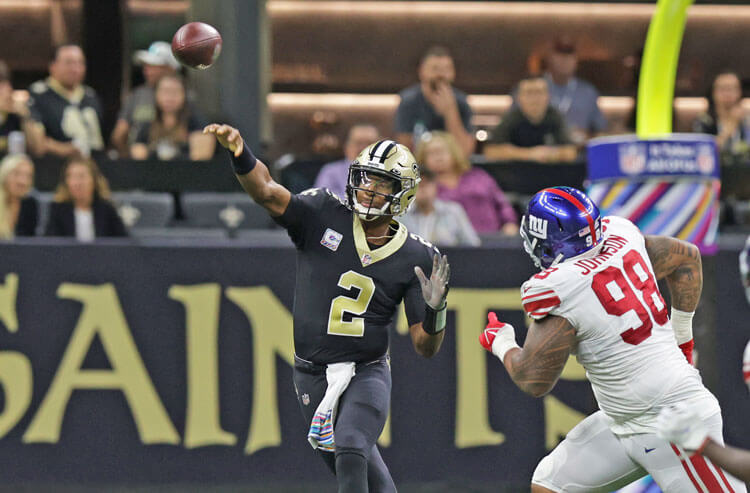 Saints vs Washington Week 5 Picks and Predictions: Hit the Bye on a High?
Provided by