New England will have lots of nerves to unpack after Week 4's Brady reunion. They're facing a huge spread in the mother of all letdown spots against lowly Houston — find out if they can muster up a cover with our Patriots vs Texans picks.

Despite all the hype and coming in as nine-point road favorites, the New England Patriots and Houston Texans come into their Week 5 matchup with identical 1-3 records. Are Mac Jones and the Pats headed for a massive letdown after last Sunday’s media circus?

Here are our free picks and predictions and NFL betting odds for Patriots vs. Texans for Sunday, October 10.

New England was -7.5 on the look-ahead but after almost defeating Brady and Co. in primetime, opened as 9-point road favorites. That number has been bet down to -8.5 ay many books. This total opened at 39, moved to 40 and is teetering between 40 and 39.5.

The Under is 5-0 in the Patriots’ last five road games. Find more NFL betting trends for Patriots vs. Texans.

From Super Bowl to toilet Bowl, the New England Patriots are going from one of the mos- hyped regular-season games of all time to hitting the road and facing Davis Mills and the Houston Texans. If this isn’t a letdown spot, we don’t know what is.

Putting our money on Houston is not an easy decision, as rookie QB un-extraordinaire Davis Mills has led his team to just nine points over two starts and is coming off a 40-0 whooping by the Bills in Week 4. Regardless of how bad the Houston offense has been, Mac Jones and the New England offense have not been much better, despite Pats fans giving Jones the keys to the original Dunkin Donuts.

The Patriots sit 27th in yards per pass, 29th in yards per rush, and are scoring just 17.8 points per game. They’ve scored more than two TDs just once and are coming off a game where they rushed for less than one yard. Jones sits 23rd in QBR, per ESPN, which is one spot below Carson Wentz and his wonky ankles.

Covering nine points on the road with a bad offense is a lot to ask, and the Patriots are also putting starting O-linemen Isaiah Wynn and Mike Onwenu on the COVID-19 list this week, while Trent Brown hasn’t played since Week 1. It’s getting harder to trust the Pats in this spot and at this number.

Many will say that New England “held” Tom Brady to 22-of-43 passing last week, but the weather was a massive factor. The Patriots’ defense has had the benefit of playing the Dolphins, Jets and Saints, which are all bottom-half offenses. Houston’s team total sits at 13.5 and although this Mills-led offense has managed only two red-zone trips over their last two games, this will be their first home start with a full week to prepare. This is by no means a Mills endorsement, especially after four picks in Week 4, but he is still 30 for 49, passing for 62 percent.

Houston actually has a better turnover percentage than New England, as Jones has also had his share of turnovers — four INTs and two fumbles (zero lost). This is not an offense we want to trust at nine points, and in a game that features a total of 39.5 points, we’re taking the points.

It’s Week 5, but the books are giving us an NFL preseason total in Houston and, to be honest, we don’t blame them.

The 39.5 total is the lowest total of the season and is warranted with both offenses sitting in the bottom-six in points per game. New England can’t run the ball, as Damien Harris has totaled just 72 rushing yards over the last three games while the passing game has scored just three TDs on the year. The injuries to the O-line will further compound these struggles and one would think that the Texans’ defense will have a little pride in Week 5 after getting embarrassed by Josh Allen and the Bills last week. It's possible the Texans get centerpiece LB Zach Cunningham back for the meeting, which would be a huge boost to this unit.

Despite some poor offensive opponents, New England still has a Top-6 pass defense and sits in the Top 10 against the run. As bad as New England has been at running the ball, Houston has been even worse and sits in dead last at 3.2 yards per rush. Getting yards on the ground will be difficult for both sides Sunday.

WR Brandin Cooks has 35 percent of the team’s total yards and this shouldn’t be a difficult offense to hold to field goals as Houston has managed just two red-zone trips over the last eight quarters.

With two bad offenses, one decent defense and two teams susceptible to turnovers and penalties, we’re struggling to find any points for the Over. This could be another sloppy game and we doubt the better offense, New England, comes out firing after last week’s circus.

New England has topped this total just once this year and needed four interceptions to do it in Week 2 versus the Jets. In that game, the Patriots gained just 4.6 yards per play and ran a low total of 57 plays from scrimmage. This seems like a perfect week to fade the New England offense, who scored 17 points against a Tampa Bay secondary that is dealing with even more injuries and hiring people off the street.

Mac Jones’ offense has also been horrendous in the red zone this year and has scored just three TDs in 12 RZ trips through four weeks. The Houston red zone defense has surprisingly held its own this season, conceding RZ TDs at 56 percent. It also stopped the Bills from adding even more TDs inside the 20 last week in four of seven attempts. Houston is averaging 1.5 takeaways per game, while Bill Belichick’s offense is averaging a robust 1.8 giveaways per match. Jones is just one game removed from throwing three picks.

The Patriots are also playing conservatively and lead the league in field goal attempts per game at 2.8, while scoring just 1.5 TDs per game. Belichick has gone for it on fourth down just three times all year and is 2 for 3 in those conversions.

If Mills and the offense can keep from punting from their own red zone and giving Jones and the offense some short fields, we aren’t expecting this Patriots’ offense to put together long and successful drives. New England sits in 25th in drive success rate and 26th in yards per drive at 29 yards. We are drinking some serious Patriots Haterade in Week 5. 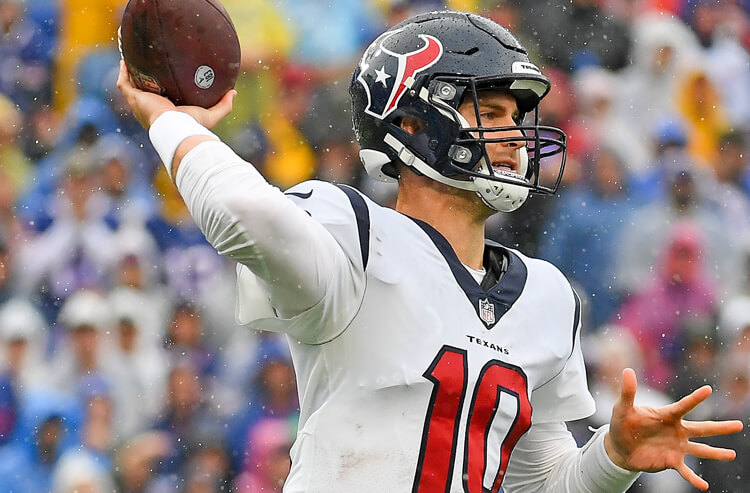 Patriots vs Texans Week 5 Picks and Predictions: Spread Working Against Fade-triots
Provided by