The NFL takes a trip across the pond for Sunday's early game, and one of the league's potential future stars might mark the occasion with his coming out party. See why Zach Wilson should be in for a big Week 5 as we break down our Jets vs Falcons picks.

Fish and chips, the Queen, and soccer. Just three of things that you associate with the United Kingdom, but the Brits are getting more and more into their (American) football and the NFL has continued to grow its international series, with this game being the first of two in London this year.

It’s a morning kickoff for those watching on American shores, so make sure you read our NFL picks and predictions for the New York Jets vs. Atlanta Falcons on Sunday, October 10 early.

(Editor's Note: This preview was published prior to Thursday afternoon's news that Falcons WRs Calvin Ridley and Russell Gage are both out for Sunday's game.)

The total on this game has jumped by two points, moving from 44 up to 46. Meanwhile, the Falcons have dropped from 3.5-point favorites down to just 3 points.

Conditions will be slightly dicey in London on Sunday, with a temperature around 66 degrees, winds gusting up to 12 mph, and a 40 percent POP.

The Falcons are 1-5 ATS in their past six games as a favorite. Find more NFL betting trends for Jets vs. Falcons.

Sunday’s early game takes place in London, England. Both teams sit on 1-3 records, with the Jets getting off the mark last week with a win over the Titans, while the Falcons had a 4-point loss to the Washington Football Team.

The Titans were missing both Julio Jones and AJ Brown last Sunday, but that doesn’t take away from the performance that the Jets put in. The Titans only managed to put up 253 passing yards, partly due to leaning on Derrick Henry and the ground game for 177 yards. Despite that, they only achieved 4.6 yards per play, compared to 5.9 for the Jets. That’s testament to the improvement in the Jets defense, which is undoubtedly growing into a strength with Robert Saleh as HC. The Jets defense now ranks 18th in the league in defensive DVOA. That isn’t brilliant, but it is indicative of improvement.

On the other side of the ball, it’s a different story, with the Jets being the lowest-scoring offense in the NFL, having put up just 47 points in four games, including a goose egg against the Broncos. Despite those struggles, only one place splits them when ranked by defensive DVOA. The Jets sit dead last, with the Falcons 31st in the league, owing in part to the strength of the teams that the Jets have faced, the Titans, Broncos, Patriots and Panthers.

Zach Wilson has struggled this season, showing occasional glimpses of magic, but against Tennessee we saw more from the second overall pick in this year’s draft. Wilson threw for just shy of 300 yards, two touchdowns and only one interception. His connection with Corey Davis is looking very promising and this week, he’ll likely welcome back rookie wideout Elijah Moore who has also shown signs so far.

Sunday’s opponents, the Atlanta Falcons, sit 29th in defensive DVOA. They’ve given up 128 points through four games, the most in the league, and have looked awful against every offense that they’ve played, including those led by Daniel Jones and Taylor Heinicke.

Cordarrelle Patterson looks like the most dynamic player on offense, something that nobody, not even Patterson himself, would have expected to see this season. Calvin Ridley has been solid but unspectacular so far and is perhaps struggling without Julio Jones around. Rookie tight end Kyle Pitts has been largely good but is yet to find the endzone, surely something that ends soon, and Mike Davis has been very poor, averaging just 1.1 yards per carry last week.

The Jets looked improved in Week 4, and out of these two teams, they look the one with the most room for improvement. We’re in a neutral stadium that will be packed with fans of all franchises, meaning we’ll see no home advantage for Atlanta. With that in mind, I’m taking the Jets +3 here. They’re gaining confidence, and we could see another step forward from Zach Wilson.

The line has risen from 44 up to 46 and it’s easy to see why. The Falcons, for all of their struggles, have managed to put up points on offense. The biggest question mark is the Jets, but they showed real improvement against the Titans on Sunday, and they’ll be against the worst defense they’ve faced all season.

There’s a real chance that we see a big leap for the Jets this Sunday and that’s something that’s only going to be helped by playing in London. The atmosphere will be one of a celebration of football, not either team. We didn’t get an International Series last year for obvious reasons, but prior to that, we’d seen some high scores. These have historically been very one-sided games and at least one team has always scored big, seemingly finding freedom in playing in front of this crowd.

Now that the game is a closer one, I’m expecting both teams to feel the benefits and for us to see the Over here.

Wilson has his passing yards total set at 242.5. It’s a number that he’s exceeded twice this year, most recently last week when he passed for 297 yards against the Titans. There have been a number of questions asked of Wilson – Does he hold on to the ball too long? Is he always looking for a deep ball? –but there have also been real glimpses of the qualities he showed at BYU. I’m expecting to see a jump from him as he continues to grow alongside his new teammates.

The Falcons have given up a lot of yards this season. Last week, they let Taylor Heinicke put up 290 yards on them, Daniel Jones managed 266, Tom Brady 276 and Jalen Hurts 264. Zach Wilson is arguably a better passer than three of those four, and Atlanta will give him plenty of opportunity. Combine that with his love of a deep ball, and a neutral stadium, and I think the Over is an easy win here. 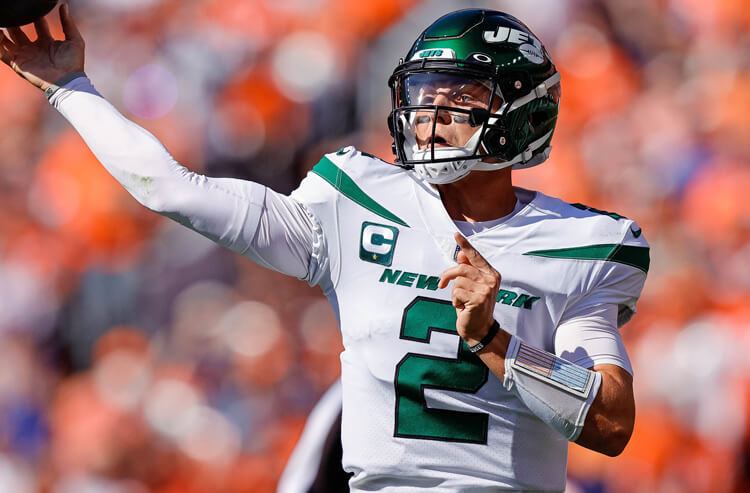 Jets vs Falcons Week 5 Picks and Predictions: Touchdown in London Town
Provided by