The AFC Championship Game seems to favor the Kansas City Chiefs, but that doesn't mean you can't find value on the underdog Bengals. We're bringing you a trio of player props, including Tee Higgins hitting the Over in his receiving yards total. 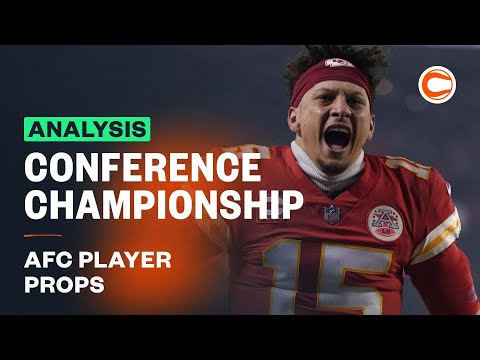 Joe Burrow and the Cincinnati Bengals have surprised most NFL fans outside the state of Ohio by making it to the AFC Championship Game. But after wins over the Las Vegas Raiders and the Tennessee Titans things get a little tougher this week.

Now, they face Patrick Mahomes and the Kansas City Chiefs, who are trying to advance to the Super Bowl for the third straight season.

This is a matchup of two of the best offenses in the NFL, so you know there are plenty of betting options in the player prop market. Find out in our favorite free player props and predictions for the Bills vs. Chiefs in the AFC Championship.

Patrick Mahomes came through for us last week by easily cashing his rushing yard prop against the Bills. The script played out pretty much as expected: the Bills were able to apply pressure on Mahomes, but the Chiefs QB did a good job of evading that pressure and scrambled seven times for 69 yards. So, we’re going back to the well once again.

Mahomes is known for his creativity to escape pressure in the pocket and isn’t afraid to tuck the ball and run, particularly in the playoffs. He's averaged 35.6 rushing yards over his last eight playoff games.

On top of that, his offensive line's inconsistent play has made Mahomes more likely to run this season. Mahomes carried the ball 66 times during the regular season for 381 yards (5.8 yards per carry). In the Week 17 matchup in Cincinnati, he carried the ball only twice, but totaled 25 yards, in a game that didn’t matter a whole lot to the Chiefs.

While the Bengals certainly don’t apply as much pressure as the Bills, they aren’t the worst, ranking 15th in quarterback pressure percentage. They should do enough to get Mahomes moving out of the pocket and go Over his rushing total of 29.5 yards, a number of he has eclipsed seven times this season.

This play is a direct result of what happened to the Chiefs in last week's thrilling victory over the Bills. You know, when Gabriel Davis torched the Chiefs secondary like he was the second coming of Randy Moss.

Davis had a historic night for the Bills, hauling in eight catches for 201 yards and four touchdowns in the loss. While Davis spent all night burning Chiefs defensive backs, Kansas City did a decent job of slowing down Bills' No. 1 receiver Stefon Diggs, limiting him to just seven yards on three catches. So, we’re going to apply that thinking to the AFC Championship.

This time, it will be Ja’Marr Chase who will draw the majority of the Chiefs’ attention. And while Chase went off in that Week 17 meeting to the tune of 11 receptions for 266 yards and three scores, you know Kansas City will bring out its best game plan to slow him down. Unfortunately for them, Tyrann Mathieu is still questionable for this matchup.

That’s where Tee Higgins comes in. Despite being overshadowed by Chase, Higgins had a great season for the Bengals, grabbing 74 receptions for 1,091 yards and six scores, and he really picked up his game down the stretch. Higgins totaled 49 of those catches for 835 yards over his final last nine games (92.8 yards per game). Higgins was also a key contributor in last week’s win over the Titans, making seven grabs for 96 yards.

While Higgins probably won’t go for 201 yards this week, he’s got a great chance to go Over his receiving yards total of 69.5, a number he eclipsed seven times in his last 11 games.

Even though I’m not taking any of Chase’s standard receiving props (maybe foolishly so), this bet is about as simple as it gets. You’re giving me plus money for Chase to score an anytime touchdown? Sign me up every day of the week.

As noted, Chase obliterated the Chiefs in that Week 17 matchup for 266 yards and three scores. Those were three of Chase’s 13 touchdowns on the season. And what makes Chase dangerous is he can burn you in a multitude of ways. Chase has five red-zone scores and eight for more than 20 yards.

But the potential offensive rookie of the year hasn’t found the end zone since that Chiefs' game. That’s the longest he’s gone without a score this season.

It doesn’t hurt that the Chiefs allowed the sixth-most touchdowns to opposing wide receivers this season and are coming off a game where they allowed four touchdowns to Davis. Don’t overthink this one. Chase that Chase score.