49ers vs Rams NFC Championship Picks and Predictions: Surefooted as a Mountain Goat

The Rams have earned the 3.5-point spread they're boasting over the 49ers in the NFC Championship game, though it might be worth waiting to see if that dips to an even 3. In the meantime, trust L.A.'s defense to stymie the Niners in the opening quarter. 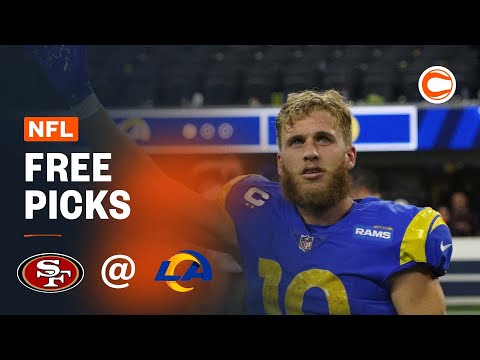 Trilogies have a history of falling short of expectations by the third go-around. But with a ticket to the Super Bowl on the line, the third meeting between the San Francisco 49ers and Los Angeles Rams promises to be an instant classic — especially if their Week 18 war is any indication.

The Rams, who blew a 17-0 lead and eventually lost in overtime to the 49ers in a thrilling season finale (allowing San Francisco into the playoffs), are 3.5-point NFL betting favorites in the NFC Championship Game.

Here are our free NFL picks and predictions for 49ers vs. Rams on Sunday, January 30.

Los Angeles opened as low as -3 on Sunday night and that line jumped between a field goal and -3.5 at most books for the first 24 hours of action. Eventually, the market consensus settled at L.A. -3.5 with the vig as low as EVEN money. As we get closer to kickoff, more books are dealing a flat -110 on this spread. The total opened at 47 points and instantly dropped to 46.5 and has ticked as far down as 45.5 points at some books.

The Rams are 5-2 ATS in their last seven playoff games. Find more NFL betting trends for 49ers vs. Rams.

49ers vs Rams picks and predictions

I was really hoping this spread would tick down to Rams -3. It looked like it was headed there, given books were raising the price on the Niners +3.5 and with public perception on Los Angeles a bit skewed after the Rams nearly collapsed again — this time to Tom Brady and the Buccaneers in the Divisional Round.

But here we are, with that nasty half-point hook on Los Angeles. Some books are still hanging a soft -3.5 for L.A., so you could wait until the weekend and see if this ticks down if late play takes San Francisco. For the purpose of this point spread lean, I’m still siding with Los Angeles as it’s been the most impressive postseason team so far… outside of the fourth quarter at Tampa.

Before those turnover-prone nerve-racking final minutes versus the Buccaneers, the Rams were rolling. They blasted division rival Arizona in the Wild Card Round and punched Brady & Co. in the chops last Sunday, building a 27-3 lead before the wheels started to wobble at the end of the third quarter.

The most impressive part of those 105 solid minutes of playoff football was the L.A. defense, which stumped the Cardinals to just 183 total yards and buckled the Bucs’ No. 1 DVOA Offense for just six points before Tampa finally found the end zone with 12 seconds left in the third frame Sunday.

Now, San Francisco is a different beast. Kyle Shanahan’s offense has gotten the better of the LA. stop unit in six straight matchups, including putting up 24 and 31 points in regulation in victories this year. The 49ers accrued 291 yards rushing and 18 rushing first downs in those games, chewing up 3.9 yards per carry and owning the possession battle. This time, however, Los Angeles could catch a break with key run blocker Trent Williams nursing an ankle injury and plenty of the Niners’ skill players coming out of that snowy showdown at Green Bay with bumps and bruises.

The best defense against the 49ers is a quick start from the L.A. offense. The Rams have done just that in their last three games, outscoring foes 20-3 in the first quarter and 55-6 in the first half but have to avoid going in the toilet in the final two frames

A quick start on Sunday would force San Francisco to stretch its offense more than it would care to, with QB Jimmy Garoppolo the team’s biggest liability and still nursing an injured thumb. While Jimmy G was stellar in a late drive that got the 49ers into overtime with the Rams in Week 18, he’s been downright pedestrian in the playoffs (63.0 passer rating, no TDs, two INTs).

As mentioned above, I’m leaning Los Angeles in the NFC title game but would like a clean field goal rather than laying -3.5. If you can, wait and see if books take weekend wagers on the Niners — a popular underdog pick — and shop around for L.A. -3.

Rams QB Matthew Stafford has been stellar in the postseason and is shredding coverages with a talent-rich receiving corps. Stafford, who owns a passer rating of 131.5 with four touchdowns and no interceptions so far in the tournament, proved he’s ready to take L.A. to the Big Game with that last-second drive to set up the game-winning field goal in Tampa last Sunday.

His top option, Cooper Kupp, has been a pain in the ass for the Niners defense (and most defenses for that matter), amassing 240 total yards, catching 18 of 20 targets along with a touchdown in their two meetings this season. Stafford has also started to gel with Odell Beckham Jr., who's caught 10 of the 12 passes thrown his way in the postseason and for bigger gains than he put up in limited work during the regular season.

On defense, Los Angeles knows it has issues slowing down the Niners’ attack, with all its pre-snap motion and misdirection. And while this will be their third look at this offense on the year, Shanahan lives in Sean McVay’s head rent-free and will undoubtedly have a few wrinkles to keep the Rams guessing.

This total opened at 47 points and quickly ticked down to 46.5 before sliding under the key number of 46 to 45.5. The past two Over/Under totals between these teams moved up from the opener, closing at 47 (Over in Week 18) and 50 points (Under in Week 10).

With Los Angeles’ best shot of winning this game perhaps relying on a shootout, we like the Over in the NFC Championship.

We talked about the Rams’ quick starts on offense but lost in that explosive play is the sound defense in those opening frames.

Los Angeles has allowed just a field goal in the first quarter over the past three games and going back to Week 13, has given up a total of only 13 first-quarter points (one TD, two FGs) while pitching a 1Q shutout in five of those last eight outings.

The Rams rank as the third-best scoring defense in the opening 15 minutes, holding opponents to an average of 2.8 first-quarter tallies, while also sitting third in defensive DVOA in the first quarter at Football Outsiders.

The Niners have gone scoreless in the opening frame in three of their last four outings, plodding through the first 15 minutes before heating up in the second quarter. San Francisco will likely see some different looks from the L.A. front seven on Sunday, as the Rams have to put more in the box to slow down the ground game. It could take Shanahan a little while to figure out that front, giving L.A. the edge out of the blocks.

49ers vs Rams NFC Championship Picks and Predictions: Surefooted as a Mountain Goat
Provided by