The AFC Championship game between the Bengals and Chiefs is set to be a shootout with fireworks from both offenses. That leaves plenty of NFL betting value to be found in touchdown props, so we're looking to a pair of stud pass catchers and a longshot TE. 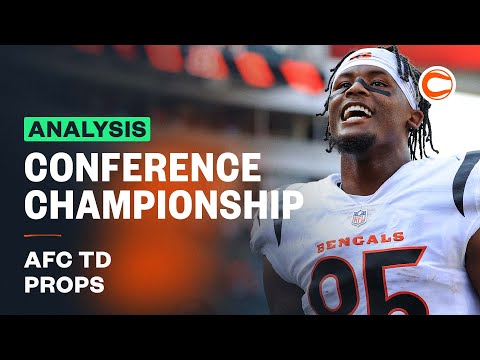 The AFC Championship is here and if there were ever a playoff game to hit multiple touchdown props, it's this one between the Cincinnati Bengals and the Kansas City Chiefs. With a total of 54.5 and a 65-point meeting just a month ago, this is going to be a shootout.

We bring you our favorite Bengals vs. Chiefs touchdown props and our best value-based longshot that may or may not be a backup tight end.

The odds below represent the best odds available for each player's touchdown market from regulated US sportsbooks.

This is as square as it gets but getting Travis Kelce to score at -110 at bet365, while some other books have this as low as -155, is still decent value. We'd likely take this TD as low as -130 as Kelce is just on another level right now and is the most consistent red zone threat the Chiefs have.

Kelce has scored a TD in five straight games and has posted 13 catches, 204 yards, and two touchdowns so far in the playoffs. His eight-yard TD to win the game last week is a perfect example of his ability to score multiple ways. He can burn one-on-one coverage, can post in the end zone, score from the wildcat, rumble after the catch, or take a quick pitch inside the five. He just seems to have more ways to score than fellow -110 TD teammate Tyreek Hill. He was held to just 25 yards in the previous meeting 30 days ago but still hauled in this TD thanks to Andy Reid's creativity. There is a reason this is one of the most bet on props of the game.

In our eyes, Kelce is the most probable player to score in this must-win game. When Patrick Mahomes needs a big play in a big situation, Kelce is the man. Over his career, Kelce has played 11 playoff games and has TDs in eight of them, with 11 total. The Bengals gave up a TD to Kelce in Week 17, another to Mark Andrews in Week 16, and one more to George Kittle in Week 14, while Darren Waller led the Raiders in receiving in the Wild Card game. Looking at it another way, we certainly wouldn't be betting for Kelce to be held off the score sheet. We're riding 1.5 units on this.

Now with the easy one out of the way, let's look for the best TD play above +150. We saw Buffalo's Gabriel Davis have his way with the Chiefs' secondary last week as he finished with 200 yards and four touchdowns. He plays his snaps on the outside and is the biggest Buffalo receiver at 6-foot-2 and 220 pounds. As Covers' Jason Logan pointed out in his Bengals vs. Chiefs analysis, the Bengals' size at receiver is a big advantage versus the Chiefs' defensive backs, who can get burned one-on-one thanks to a heavy blitz rate from the Chiefs' defense.

In the Week 17 meeting, it wasn't just Ja'Marr Chase giving the Chiefs problems. The Bengals' 6-foot-4 outside receiver, Tee Higgins, also had 62 yards receiving with a long of 39 yards. Higgins also quietly caught seven of his nine targets for 96 yards versus a very underrated Titans secondary last week. With his towering frame, there is no surprise that he also leads all Cincinnati receivers in red zone targets on the season.

With all the talk about Chase and Burrow, Higgins is flying under the radar this weekend in what is a great matchup for a player in solid form. His TD price is not very consistent which is giving us a great option at +190 at DraftKings while other books are as low as +100 (Caesars). It's a one-unit play for us.

With a touchdown total set at 7.5 TDs, this is a perfect game to comb the lower touchdown tiers looking for those pocket-padding longshot TD props.

In the previous meeting, No. 2 tight end Blake Bell finished with third-most receiving yards on the team and caught all three of his targets for 35 scoreless yards. However, he has seen just one target since then. Fellow TE Noah Gray is playing the same amount of snaps and has seen some action in the passing game on both playoff games. Gray was also the big benefactor back in Week 16 when Travis Kelce was out, as he played 76% of the snaps while Bell saw just 37%. Both TEs run close to 10 routes per game but it has been the better-priced Gray (+1,000) who has been seeing more targets of late.

As a whole, the Chiefs' backup tight ends have a combined three TDs on the season (one of those is Gray's) which isn't mindblowing but they can become part of the game plan inside the 20, especially with creative play design from Andy Reid.

There aren't a ton of longshot TD prices on the board as both teams spread around the wealth but Gray is our best +1,000 or better play and could get bettors excited when the Chiefs get near the goal line. A $20 bet on Gray would return $220. That's 0.2 units for us. 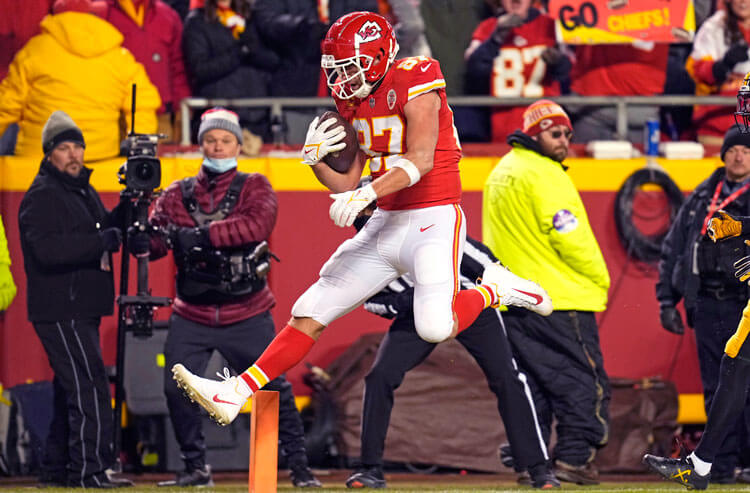