The NFC Championship Game features an NFC West grudge match between the 49ers and Rams. We're bringing you our best NFL player prop picks for San Francisco vs. L.A., including Jimmy Garoppolo rebounding from his showing in Green Bay.

The San Francisco 49ers enter the NFC Championship Game as 3.5-point underdogs versus the Los Angeles Rams, who they beat in OT back in Week 18.

Will this again be a great matchup for Kyle Shanahan’s offense, who managed 449 total yards in the meeting just three weeks ago?

Find out in our free NFL props and predictions for 49ers vs. Rams on Sunday, January 30.

On Covers Daily this week, host Adam Chernoff and professional bettor Fabian Sommer discussed the heavy usage of early-down runs in Sean McVay’s playcalling since Week 18. Over that stretch, L.A. is gaining -0.28 EPA/rush and 2.9 yards per carry, which equates to a low 23.8% success rate. Those games were against some decent run defenses (San Francisco, Arizona, and Tampa Bay) but McVay's recent obsession with early-down rushes, even against bad pass defenses, has left some scratching their collective heads and questioning his gameplan heading into Sunday.

Since Cam Akers is back, the Rams ran the ball 80 times on 1st & 2nd down vs SF/ARI/TB, excluding fumbles:

All three metrics would rank dead-last on the season.

This hasn’t given Cam Akers the best environment to gain yards on the ground, as he has just 2.3 yards per carry since returning from his Achilles injury. Making things worse for the Rams’ run game is the fact that the 49ers have the best defense versus the run since Week 10. Their -0.174 EPA/play is the best mark over that stretch in the league.

Akers is also coming off a two-fumble game that could possibly leave the door open for Sony Michel to handle a few extra snaps. Akers failed to hit the Over on his rushing total last week and had 24 chances and a lead to do it. This week, his rushing total opened 59.5 yards, which is three yards higher than it opened last week. That rushing total also fell nine yards and closed at 47.5.

The Rams gained just 2.4 yards per carry against the 49ers in Week 18 with a positive game script, 2.4 YPC last week versus the Buccaneers, and 3.7 YPC in the Wild Card Round. We’re hitting the Under on Akers again this week and see this total falling instead of closing above 60 yards. We’re already seeing this number start to tumble.

This one might come off as square but we need to get some money on Deebo Samuel heading into this game. He's rushed the ball 10 times in back-to-back playoff games, which shows that his already busy role hasn’t hit its ceiling yet, as his season-high in rushing attempts heading into the playoffs was eight.

The 49ers are 8-2 SU since Deebo started receiving more than a handful of rushes per game and since Week 11, the hybrid weapon is averaging 7.5 carries per game for 46.4 yards. He ran for 45 yards on eight carries and a score back in the Week 18 meeting.

This rushing total opened at a season-high 41.5 yards but has tumbled slightly and can be had at 39.5 yards. He's gained 177 yards through the air over his last three games but 156 yards on the ground over that same stretch.

Kyle Shanahan has been successfully creative in getting the ball into Samuel’s hands and the receiver has been making his coach look like a genius with his expanded role. Samuel is averaging 6.2 yards per carry on the season and with a projected rushing total of 10 carries, we could be cashing this ticket with as few as six or seven carries.

Covers Daily was a goldmine of professional advice this week as Pro Football Focus’ Eric Eager went into great detail about the Rams’ defense and how it’s a bad matchup for San Francisco's offense.

Los Angeles disguises its defensive coverage more than any other team in football, at a 43% rate, which can also be called defensive motion. However, thanks to the 49ers’ offense running motion at the highest rate in the league, McVay’s defense will be a little more transparent for Jimmy Garoppolo. In the Week 18 meeting, the Rams ran defensive motion at a 29.9% clip, which helped Garoppolo collect 23 completions for 313 yards — many of those yards coming after the catch.

on first and second down this year the #Rams disguised their coverage on 43.1% of the time against non-49ers opponents, versus 29.9% versus the #49ers https://t.co/1CW6eI7bIh

Another advantage San Fran's QB has is that the Rams use the least amount of defenders in the box on early downs in football. In Eager’s words, “They (the Rams) crowd the line of scrimmage less than any other team.” The 49ers run the ball on early downs at the second-highest rate in football and if they can gain yards on early downs and keep the QB from third and longs, Garoppolo could easily find success again versus, “a defense that was engineered to beat the Chiefs but not the 49ers.”

After last week’s 131-yard performance, it seems the entire internet is collectively crapping on the 49ers’ QB, which has helped his passing total fall to 228.5 passing yards. His total opened at 242.5 yards last week and 252.5 in the Wild Card Round. Garoppolo is over the shoulder injury and has adapted to his thumb injury. With YAC monsters Deebo Samuel, George Kittle, and, to a lesser degree, Brandon Aiyuk, Garoppolo doesn’t need to complete deep passes to top this modest passing total. It has also started to trend upwards. 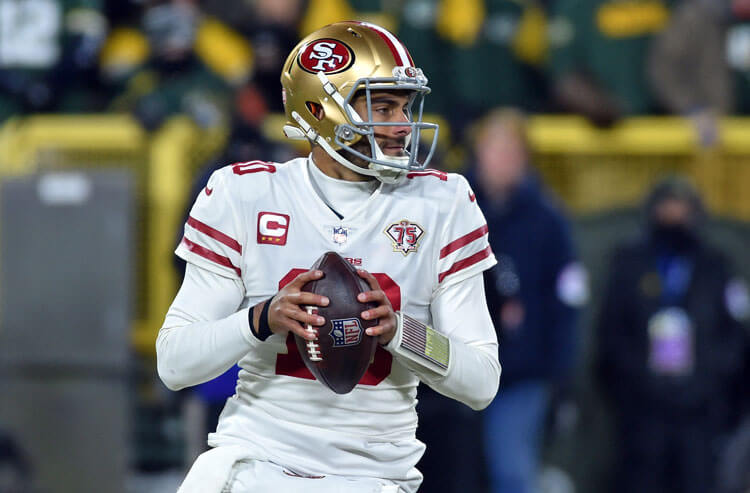