Bengals vs Chiefs Same-Game Parlays For The AFC Championship: Mixon It Up

The NFL season is reaching its ultimate sweat, and the AFC Championship pits two high-octane offenses against each other for some exciting SGP potential. Get our best single-game parlay picks for Bengals vs. Chiefs.

The Cincinnati Bengals and Kansas City Chiefs will meet in the AFC Championship game Sunday, with the winner advancing to Super Bowl 56. These two teams put on an offensive display in their Week 17 meeting, which the Bengals won 34-31. This potential shootout gives us plenty of options to build a hefty and potentially profitable single-game parlay that's littered with Overs and points.

Without further ado, we give you our best free SGPs for Bengals vs. Chiefs.

For the Bengals backers:

You have to admit, getting more than seven points in a Conference Championship game when the underdog already beat the favorites less than a month ago is a great deal. That's where we're beginning this SGP, with the Bengals at +7.5. The Kansas City defense is not a good enough unit to be laying 7.5 points this late in the season and especially versus an offense that gained 9.4 yards per pass against it less than 30 days ago.

Next up is a Joe Mixon receiving prop. Only one team allows more running back receptions than the Chiefs at 6.4 per game, and only the Jets and Seahawks allow more receiving yards to opposing RBs. Mixon hauled in seven of his eight targets for 40 yards in the Week 17 meeting and the RB has 23 catches and 189 yards receiving over his last four games. With teams focusing on that dangerous group of receivers, Mixon has done some damage underneath and has even found himself getting down the field of late as well. With his reception total sitting at 3.5 and paying -170 for the Over, we're taking the Over on his 27.5 receiving yards, which is a number he's topped in four straight games.

Thirdly, we're taking Over 28.5 rushing yards for Patrick Mahomes. SGPs think there is a negative correlation between Mahomes' rushing total and the Bengals at +7.5 when, in fact, trailing quarterbacks are more likely to hit their rushing totals playing from behind. CIN +7.5 (-115) plus Mahomes' Over rushing prop has odds of +333 while KC -7.5 (-105) plus the QB's Over pays +220. Knowing how the SGP multiplies correlated odds is important in SGP building. We also really like Mahomes doing exactly what he did vs. Buffalo where he ran for 69 yards on seven carries.

USA: AFC title SGP bonus: Opt-in and place a same-game parlay on the AFC Championship risk-free! If your SGP loses, get up to $25 back at DraftKings! Claim Now

For the Kansas City stans...

In the last meeting, the Chiefs gained 6.7 yards per carry with Darrel Williams. He's coming back from injury but Clyde Edwards-Helaire will likely be getting the majority of carries with Jerrick McKinnon operating as the pass-catching back. CEH could see 9-12 carries, but with a modest rushing total of 37.5 yards, he could top this number before the second half. He gained 60 yards on seven carries in his first week back from injury versus the Bills' tough run defense and should have a bigger role Sunday, as he's one more week removed from his shoulder injury. This rushing total could still hit the Over in a worst-case scenario where both McKinnon and Edwards-Helaire split carries.

Tight end Travis Kelce has a touchdown in five straight games and is tied for the team lead in red-zone targets with Tyreek Hill since Week 17. Andy Reid has plenty of plays to get the ball into his hands inside the 20, and we haven't seen the Mahomes-to-Kelce shuffle pass on the three-yard line in a few weeks. Kelce showed he can win games last week and had a TD on just 25 receiving yards in the previous meeting.

In Week 17, a total of 21 points were scored in the first quarter as both teams showed zero problems moving the ball and picking up big yards. Scoring in the first frame is nothing new for either of these two teams as Kansas City scores more first-quarter points than 30 other NFL teams on the season while the Bengals have scored in the first quarter in six of their last seven games. In a game with a total of 54.5, getting both teams to score in the first 15 minutes should be quite probable and still allows us to cheer for the Chiefs down the stretch. There is a chance this SGP cashes very early. 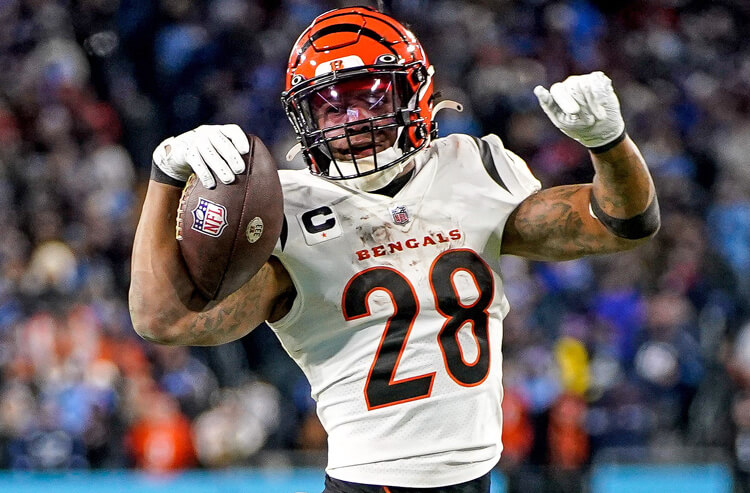 Bengals vs Chiefs Same-Game Parlays For The AFC Championship: Mixon It Up
Provided by