Next up on the Chiefs' Super Bowl path are the Cincinnati Bengals, the surprise story of the playoffs and a team that defeated them 34-31 in Week 17. Win or not, Cincy has the offensive firepower to hang around — as our NFL betting preview breaks down. 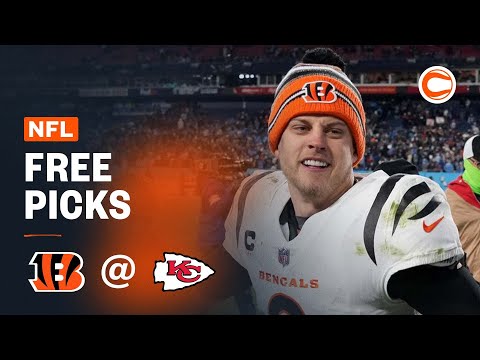 Patrick Mahomes and the Kansas City Chiefs are on a mission to make the Super Bowl for the third year in a row but first, they'll have to get by the Cincinnati Bengals in the AFC Championship on Sunday afternoon.

Despite losing to the Bengals at the start of the month, oddsmakers expect Kansas City to win comfortably in the rematch with NFL betting lines opening with the Chiefs as 7-point home favorites.

Here are our best free NFL picks and predictions for Bengals vs. Chiefs on Sunday, January 30, with kickoff at 3 p.m. ET.

This line hit the board at Chiefs -7 with the Over/Under at 53.5. Early money came in on the Over, shifting the total to 54.5. While the line has stayed steady at most books, some have seen movement to Kansas City -7.5

The Over is 7-0 in the Chiefs' last seven games overall. Find more NFL betting trends for Bengals vs. Chiefs.

Bengals vs Chiefs picks and predictions

The Chiefs come into this game off a thrilling 42-36 victory against the Bills on Sunday. That was one of the craziest endings in NFL history with both teams combining to score 25 points in the final two minutes of regulation before Mahomes drove 75 yards down the field and threw a touchdown to Travis Kelce in overtime to win.

It's hard to imagine that after entering the season as Super Bowl favorites, Kansas City's title odds fell to +1,300 and they were below .500 at the start of November. The Chiefs covered the spread just twice in their first nine games of the season with their defense ranking near the bottom of the league and Mahomes struggling against defenses that refused to blitz and instead dropped multiple defenders into coverage.

However, in the second half of the season, Kansas City made massive strides. KC ranked 10th in the league in DVOA defense after Week 9, Mahomes started looking like his usual MVP self and the Chiefs won nine of their final 10 games. That said, their one loss during that span came in Cincinnati in Week 17 with the Bengals kicking a game-winning field goal as time expired to win 34-31.

Cincinnati quarterback Joe Burrow shredded Kansas City's shaky secondary in that previous meeting, completing 30 of 39 passes for 446 yards and four touchdowns with no interceptions. Three of those scores and a whopping 266 yards were racked up by rookie wideout Ja'Marr Chase.

The Bengals defense showed vast improvement this season, finishing the regular season ranked 11th in the league in EPA/play, and their ground game has been solid thanks to Pro Bowl running back Joe Mixon. But this is a team that needs explosive plays from Burrow and the passing game if they want to keep up with KC.

Burrow finished the regular season with 4,611 passing yards and 34 scores despite playing behind one of the league's worst lines. While playing against a blitz-happy defense in a hostile environment like Arrowhead won't be easy for a young QB, Burrow excelled on the road against Texas and Alabama in college so don't expect him to wilt in front of a big crowd. Especially when you consider that the Chiefs' pass defense couldn't slow down Josh Allen at Arrowhead last week.

With the Bengals going 5-0 ATS in their last five games as a road dog, we're taking them with the points but recommend looking for a +7.5 line or waiting for it to move through that key number at 7.

While the Chiefs' stop-unit played much better down the stretch, they did falter against strong offensive teams. Besides getting lit up by the Bills last week and surrendering 475 yards to the Bengals in Week 17 they also gave up 428 yards and 28 first downs to the Chargers in Week 15.

While it might appear that Cincy has been playing great defense in the playoffs, holding the Titans and Raiders to fewer than 20 points, a closer look suggests otherwise. The Raiders rolled up 385 yards of offense but went just 1-5 in the red zone and turned the ball over twice, while Tennessee QB Ryan Tannehill was picked off three times.

The Chiefs' red-zone offense is far more clinical than the Raiders and Mahomes is light years ahead of Tannehill so don't expect the Bengals to contain the Chiefs on Sunday. Especially with KC scoring more than 30 points in six of their last seven games and averaging a whopping 37.3 points per game over that span.

This total opened at a high 53.5 before ticking up to 54.5 but we're not shying away from betting the Over.

It would be unrealistic to expect another 446-yard performance from Burrow against the Chiefs, but even if he regresses in that area he should still put up big numbers. After all, the Chiefs were 27th in the league in passing yards allowed per game (251.4) during the regular season while ranking 24th in pass defense DVOA.

Burrow was pummeled in the divisional round, getting sacked nine times by the Titans, but he still managed to throw for 348 yards. That was the fifth time in the last seven games that the second-year pro has thrown for at least 300 yards.

We see two ways this game script can go. The first, similar to the previous meeting, sees Burrow pick apart a weak KC pass defense and keep the Bengals in this game. The second sees the Chiefs jump out to a big lead thanks to their quick-strike offense, forcing Cincinnati to abandon the run and air the ball out as they play catch up. Either way, we like Burrow to go Over his passing yards total which is set at a reasonable 284.5.

The above widget represents the best live odds available for each betting market from regulated sportsbooks. 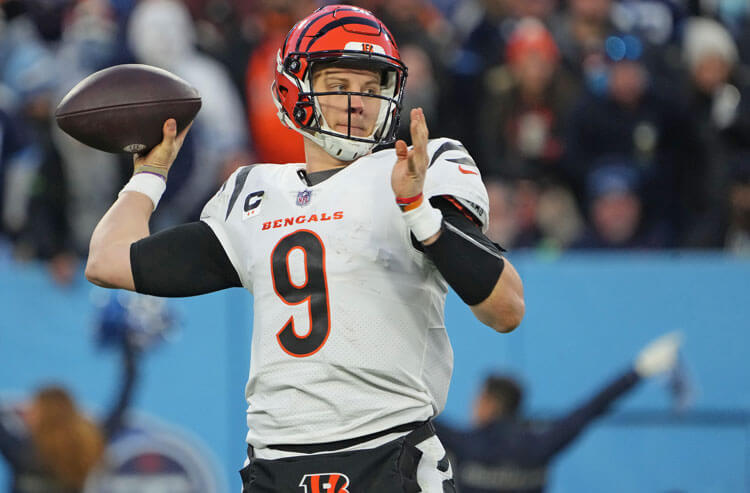