The NFC Championship Game between the 49ers and Rams may not have the fireworks potential as its AFC counterpart but there's still value to be found in the NFL betting TD market. Our touchdown props are looking at a mispriced RB and a sneaky QB. 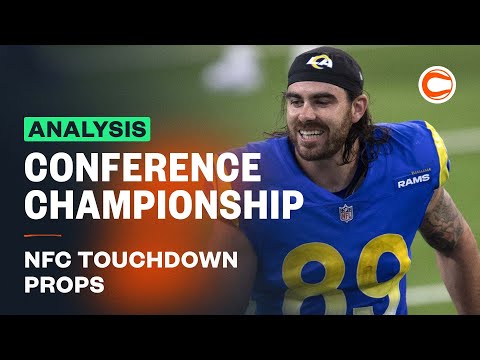 The NFC Championship game between the San Francisco 49ers and Los Angeles Rams might not have the shootout potential the AFC Championship does, but these two teams combined for six touchdowns in their Week 18 meeting and there is plenty of value in these touchdown markets as the total of 45.5 is directly influential on the TD prices.

Without further ado, our NFC Championship touchdown prop picks for the 49ers vs. Rams.

The odds below represent the best odds available for each player's touchdown market from regulated US sportsbooks.

The Rams’ defense has given up three rushing TDs in their two playoff games and another rushing score to Deebo Samuel in Week 18. They've also allowed three red zone touchdowns in four trips so far this postseason, with all those scores coming by an opposing running back on the ground.

As we pointed out in our 49ers vs. Rams prop article earlier in the week, the Rams average the fewest players in the box per play in football. With San Francisco’s constant motion on offense, this is a bad matchup for the Rams, who disguise their defensive coverage at the highest rate in football. The 49ers gained 4.4 yards per carry in the Week 18 meeting and we think this San Francisco offense can score on the ground Sunday night. The toughest question is whether to take Elijah Mitchell or Deebo Samuel.

Samuel has scored in each of the two meetings this season — both on the ground — but with less passing in the offense, Samuel has just six catches to his name in the playoffs to go along with 20 carries. Mitchell, on the other hand, has 44 carries and four catches through two postseason games and is being priced better than Samuel to score Sunday.

Mitchell had a rushing TD in the Wild Card Round versus Dallas and has been getting the first cracks at scoring on goal-to-go situations. The Deebo hype may have gotten too loud, as there is no way a running back who could possibly get 30 touches Sunday should have a TD price of +130. This is a team committed to running and leans on one running back to do so. This is not complicated and we’re betting to win 1.5 units.

The 49ers and Rams have played twice this season and tight end Tyler Higbee has already totaled three touchdowns in those meetings. With Cooper Kupp and Odell Beckham Jr. on the roster, it’s easy to forget one of Stafford’s most-trusted targets in the passing game.

The secondary is by far the weakest point of the 49ers’ defense. They allow 1.4 receiving TDs per game and let Dalton Schultz lead the Cowboys in receiving with seven catches for 89 yards in the Wild Card Round. Higbee had six grabs for 55 yards and two scores versus the Niners in Week 18 while Kyle Pitts had four grabs for 77 yards in Week 15. The 49ers haven’t faced a ton of good pass-catching TEs this season but the ones they did face managed to collect some stats.

So far in the playoffs, Higbee’s production (seven catches for 97 yards on 11 targets) is just below that of Beckham’s (10 catches for 123 yards on 12 targets). Higbee averages over 1.00 red zone targets per game and facing this stout San Francisco run defense, we could see some more passing on early downs from McVay.

OBJ’s touchdown price can be found at +140 but we’re preferring Higbee this week at +240 at BetMGM. This is our favorite mid-range TD prop of the game.

If you’ve been following the Rams so far in the postseason, then you’re likely aware of Sean McVay’s infatuation with using the beat-up body of Matthew Stafford for some short-yardage including on the goal line. The signal-caller has scored rushing touchdowns in back-to-back games and has had his number called three times in the postseason.

It all started in the Divisional Round, where Sony Michel failed to score on a 1st and goal from the two-yard line, and then Stafford was given two(!) cracks at the TD after failing on second down. Getting two chances was incredibly surprising but getting another chance on 3rd down the following week versus the Buccaneers shows McVay might have an interest in this play call.

The Rams have not had much success running in the red zone so far in the playoffs, as Akers and Michel have yet to record a rushing TD and facing a San Francisco defense that ranks No. 1 EPA/play against the rush since Week 10 won’t help. Perhaps McVay stays with his new Tom Brady-inspired playcalling on the one-yard line and at +900, there aren’t many better TD options than Stafford the Sneak King. 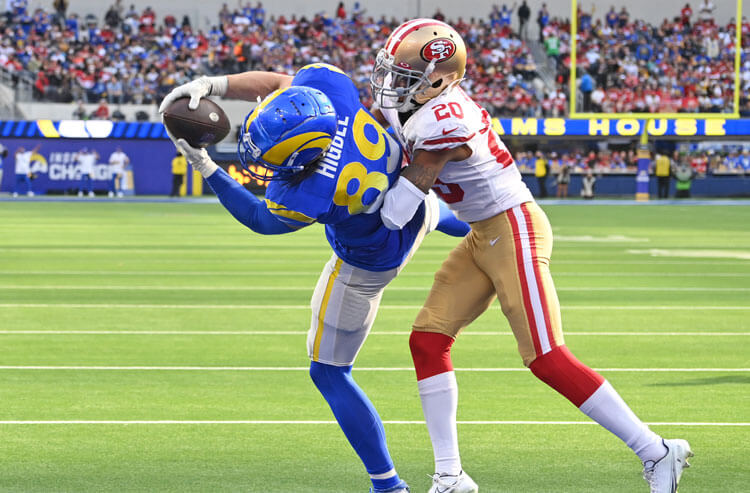