49ers vs Rams Same-Game Parlays For The NFC Championship: OBJ Steals the Show

The NFL season is down to the final four, and the NFC Championship sees the rival Rams and 49ers against each other with exciting SGP potential. Get our best single-game parlay picks for 49ers vs. Rams.

On Sunday Night Football we see an all-NFC West clash as the San Francisco 49ers and Los Angeles Rams meet with a spot in Super Bowl 56 at stake. Old friends Kyle Shanahan and Sean McVay are ready to go to battle again at SoFi Stadium.

No matter which of these divisional rivals you think will win we’ve got you covered with a great same-game parlay for each team. Don’t miss out on our same-game parlays for the San Francisco 49ers vs. Los Angeles Rams.

For the 49ers faithful:

The 49ers’ 13-10 victory over the Packers might not have been the most incredible display of offensive talent but it showcased their strengths, some smart offensive play despite a limited quarterback, and brilliant defense. We’ll tap into both of those things for this same-game parlay.

First up, we’re taking the Under on Matthew Stafford’s passing yards. Stafford has been very good throughout the season but he’s not always matched up well against this 49ers defense. In the two games this season he’s only passed for 238 and 243 yards. There’s a very good chance that if the Niners win on Sunday, they’d have held Stafford below his passing total yet again.

Deebo Samuel might not have scored in that famous victory over the Packers, but he was integral to the victory, fantastic on the ground, and also adding 44 yards in the air too. He’s going to be key to the 49ers winning this and so we’ll be backing Over 39.5 rushing yards for the former South Carolina man, in addition to him finding the end zone, something he’s done 10 times in his past 10 games.

Nick Bosa recorded two sacks against the Packers and I’m confident that he’ll manage to get his hands on Stafford on Sunday, especially with question marks over the health of the Rams’ offensive line. In two games against the Rams this season he’s got 1.5 sacks and I think he’ll come up big again here.

Elijah Mitchell might have been an unheralded running back coming into this season but he’s been brilliant for the Niners this year. His line on receptions sits at 1.5 and he should go Over that if the 49ers are to win. He caught three of four passes last weekend and has had at least two targets in six of his last eight games.

USA: NFC title SGP bonus: Opt-in and place a same-game parlay on the NFC Championship risk-free! If your SGP loses, get up to $25 back at DraftKings! Claim Now

For the Rams fans...

If you’re reading this, then you’re probably thinking the Rams beat the 49ers, and I agree. If the Rams are going to beat the 49ers on Sunday, then I’m confident that these things will happen.

When Odell Beckham Jr. arrived in L.A. from the Browns, it was seen as a team going all-in on winning and many, myself included, questioned whether OBJ still had the magic. During his short time with the Rams, he’s shown that he certainly does. Beckham has scored six touchdowns in 10 games for the Rams and is thriving with Cooper Kupp taking a lot of the attention. I’m confident that OBJ will find the endzone on Sunday and he’ll also hit the Over on 4.5 receptions. He had six receptions on eight targets against the Buccaneers and it’s clear that he’s become a key part of the offense. In his past five games, he’s had more than five or more targets on four occasions. Smash the Over here.

Next up, we’re backing Cam Akers to have more than 17.5 rushing attempts. He had 24 attempts against the Bucs and although he almost gave up a costly fumble, I expect him to be back carrying the rock again. Once the Rams get the lead on Sunday, we can expect them to work the clock by feeding Akers the ball, so again we’ll be taking the Over.

Whoever wins this game will need to excel on defense, and fortunately for the Rams, they have Aaron Donald, the best player in football. He got a sack last week and looked like a wrecking ball against the Bucs, which will worry Kyle Shanahan. Let’s back him to record another sack.

Finally, we’re going to continue the defensive theme by backing the Rams’ defense to force an interception. The line on Jimmy Garoppolo interceptions sits at 0.5 and we’ll be taking the Over. He’s had one in each playoff game so far and nine in his last eight games overall, including one last time these two teams met too. 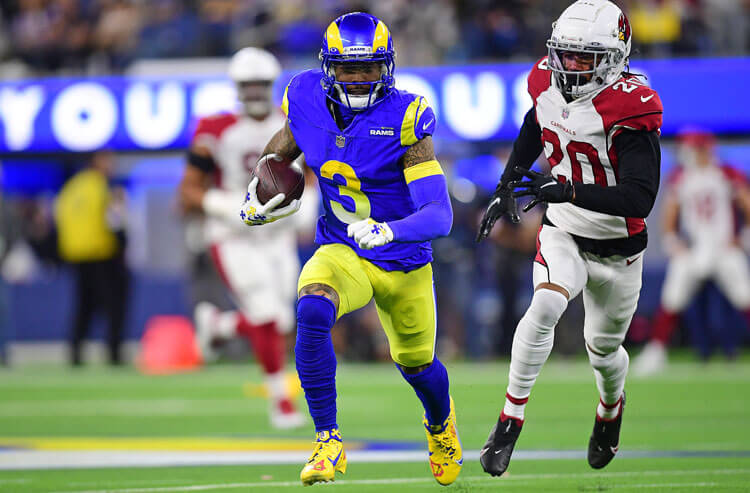 49ers vs Rams Same-Game Parlays For The NFC Championship: OBJ Steals the Show
Provided by