The NFC Championship is the final game on the board Sunday and odds have the Rams sitting as 3.5 point favorites. Some books have taken more bets on L.A. but are heavy with San Francisco money. Check out the latest line moves for the NFC title game. 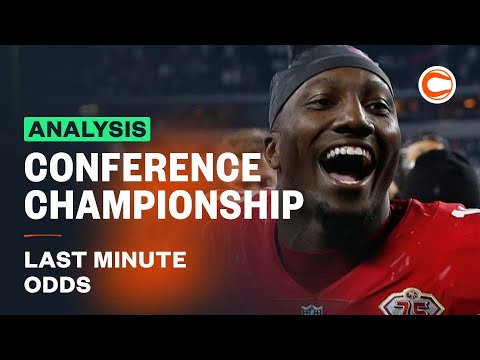 The NFL season is down to a final three games, two of which kick off today. Conference Championship odds are the focus of the NFL betting world, with the AFC and NFC title games determining the two teams bound for the Big Game in Los Angeles.

The AFC Championship odds feature the Cincinnati Bengals battling the Kansas City Chiefs this afternoon (3 p.m. ET) followed by the NFC Championship Game tonight (6:30 p.m. ET) which has odds set for the third matchup this season between the San Francisco 49ers and Los Angeles Rams.

Here are the current NFL Conference Championship odds and early betting action for the AFC and NFC title games:

These are the NFL odds for the AFC and NFC Championship, including the Los Angeles Rams being favored by 3.5 vs. the San Francisco 49ers and the Cincinnati Bengals at +7 against the Kansas City Chiefs.

UPDATE 2:30 P.M. ET, SUNDAY JAN. 30: With kickoff just half an hour away, Kansas City -7 (-110) is the most popular spread across the market, with a few books dealing the Chiefs as touchdown faves at -115 juice. According to PointsBet sportsbooks, ticket count is dead even at 50/50 on the AFC Championship spread while 60% of the money is riding on Kansas City. Our Covers Consensus shows 57% of picks on Bengals, which is down from 61% early this morning. This total is sitting at 54.5 points at most books, but WynnBet is up to 55. Their books have taken a reported 71% of bets on the Over which has also drawn 79% of the handle on the total.

UPDATE 9:30 A.M. ET, SUNDAY JAN. 30: Early gameday action has trimmed the half-point hook off the AFC Championship spread at some sportsbooks, sliding Kansas City down from -7.5 to -7. If you like the underdog Bengals, you can still find Cincinnati +7.5 (-115) at places like BetMGM, however, operators like PointsBet are down to Chiefs -7 (-105) indicating a potential move back to -6.5 if more money on Cincinnati shows up. Our Covers Consensus is showing 61% of picks on the Bengals while operators are reporting more bets on Kansas City and as much as 82% of the handle riding on the home team. The total for the AFC title game is between 54.5 and 55 points as of Sunday morning.

UPDATE 11:47 A.M. ET, FRIDAY JAN. 28: As of Friday morning, almost all sportsbooks across the board have added the hook to Chiefs -7.5. DraftKings is one of the lone remaining books still at -7 but are dealing a vig of -120 on the Chiefs side. They are still reporting 60% of the bets and 75% of the money on the home favorites, so a move to -7.5 could be imminent if this trend continues.

UPDATE 2:40 P.M. ET, THURSDAY JAN. 27: More sportsbooks are flipping their AFC Championship Game point spread off the key number from Chiefs -7 to -7.5. 888sport, Pinnacle, and SIA all made the move Thursday and other books may be headed in the same direction with increased juice on Kansas City -7. DraftKings is reporting 61% of the bets and 76% of the handle on the home favorites and have juiced that side up to -115.

UPDATE 3:30 P.M. ET, WEDNESDAY JAN. 26: We've reached the midweek mark and the market consensus is Kansas City -7 (-110) with BetMGM sticking out with Cincinnati +7.5 (-120), as of Wednesday afternoon. Our Covers Consensus shows 56% of picks taking the points with the Bengals while sportsbook operators like DraftKings are reporting 61% of bets and 77% of handle on the Chiefs. As for the Over/Under total, the number climbed from 53.5 to 54.5 and briefly dipped to 54 points before getting buyback on the Over and returning to 54.5. WynnBet is currently dealing 54 (Over -110).

UPDATE 9:00 A.M. ET, TUESDAY JAN. 25: As of Tuesday morning, most sportsbooks are dealing Kansas City -7 (-110) though a few have the vig up to -112 on the touchdown favorite. BetMGM remains the outlier with the Chiefs set at -7.5 (-105). Our Covers Consensus shows 55% of early picks on Cincinnati, which contrasts what operators are reporting. DraftKings sportsbooks have taken 63% of bets and 82% of the handle on Kansas City for the AFC Championship Game. This total made a move from 53.5 to 54.5 on Monday and sits there at most books, with WynnBet dealing 54 Over/Under.

UPDATE 1:30 P.M. ET, MONDAY JAN. 24: The market consensus as of Monday afternoon is Kansas City -7 with BetMGM hanging on to -7.5. And while most shops are dealing a flat rate (-110) on this touchdown spread, some books are down to Kansas City -7 (-105) with some early interest in the underdog Bengals. Our early Covers Consensus numbers show 52% of picks on Cincinnati. This total has ticked up from 53.5 to 54.5 points and may keep climbing with some bookies posting Over 54.5 (-115).

UPDATE 10:30 P.M. ET, SUNDAY JAN. 23: The Chiefs were -6.5 look-ahead chalk before their unbelievable battle with the Bills in the Divisional Round on Sunday night, and some official openers did hit the board below the key number of a touchdown after KC's thrilling overtime victory. Those Kansas City -6.5 spreads didn't last long and other shops opened the Chiefs as 7-point home favorites, with books like BetMGM even hanging -7.5 (-110). The total opened at 53.5 at online operators and some mainstream books started at 51.5 points before quickly tacking on two more points for a market consensus of 53.5 as of late Sunday evening.

UPDATE 5:30 P.M. ET, SUNDAY JAN. 30: With kickoff coming soon, sportsbooks are dealing Los Angeles -3.5 anywhere from EVEN to a flat -110. PointsBet sportsbooks are reporting 57% of bets on the Rams but 54% of the handle on the 49ers. Our Covers Consensus is showing a dead-even 50/50 split in picks for the NFC Championship Game. This total is at 45.5 points with the Over -115 at some spots.

UPDATE 9:30 A.M. ET, SUNDAY JAN. 30: Most books are still at Rams -3.5 as of Sunday morning, with the vig ranging from a flat -110 to as cheap as EVEN at 888Sport. PointsBet sportsbooks have flirted with Rams -4 throughout this weekend and saw immediate buyback on the 49ers any time they did up the spread. Covers Consensus shows 52% of picks on San Francisco - a flip in terms of that number, with L.A. as high as 53% on Tuesday. Sportsbook operators are reporting a solid two-way ticket count for the NFC Championship but have taken bigger wagers on the Niners, with 64% of the handle on the underdog. This total has ticked down from an opener of 47 points and now sits as low as 45 (Over -110). DraftKings, one of the books at 45 points, was reporting 54% of bets on the Over and 62% of the money banking on a high-scoring game as well.

UPDATE 1:11 P.M. ET, SATURDAY JAN. 29: As of Saturday, the point spread for Sunday's NFC Championship Game is still sitting at Rams -3.5. There has been a bit of movement with the total, however. After opening at 47, the Over/Under number is down to 45.5 at the majority of sportsbooks, but a few shops have bumped back up slightly to 46. DraftKings is one of the books that have bumped the number to 46 and are reporting 54% of their bets and 62% of their action for this market on the Over.

UPDATE 3:30 P.M. ET, WEDNESDAY JAN. 26: The select sportsbooks that were hanging Rams -3 (-120) as of Wednesday morning have taken money on Los Angeles and have gone back to L.A. -3.5, which is the market consensus. That half-point hook on the field carries vig as low as +102 at some online shops and -105 at mainstream U.S.-facing operators. Covers Consensus shows 51% of picks on the Rams and sportsbook operators are reporting 64% of tickets and 60% of handle on the host team in the NFC Championship. This total dropped as low as 46 points on Tuesday, after opening at 47 Sunday night, and is down as low as 45.5 points at BetMGM (Over -110).

UPDATE 11:58 A.M. ET, WEDNESDAY JAN. 26: The vast majority of sportsbooks are still hanging on at Rams -3.5, although a few shops (including DraftKings) have dropped their point spread down to a juiced -3 (-120). As of Wednesday morning, the total is sitting at a flat 46 at with Covers Consensus numbers showing 52% of the wagers on the Under.

UPDATE 9:00 A.M. ET, TUESDAY JAN. 25: As of Tuesday, the bulk of bookmakers are hanging a soft Los Angeles -3.5 with the price tag as low as EVEN money at some spots. Other shops have a field-goal spread on the board with the Rams -3 (-120). According to our Covers Consensus, 53% of early picks are siding with the home favorite. Operators are reporting a big lean toward L.A. with 65% of ticket count and 60% of the money backing the Rams in the NFC Championship Game. This total has taken a tumble after opening at 47 points Sunday night and has slimmed as far as 46 (Over -120).

UPDATE 1:30 P.M. ET, MONDAY JAN. 24: Most sportsbooks have the Rams as 3.5-point home favorites but have made the Niners an expensive +3.5 underdog, with the vig on that spread as high as -120. Some books have dropped to Los Angeles -3 (-115) as of Monday afternoon. Early Covers Consensus data shows 55% of picks on Los Angeles in the first 16 hours of action. This total opened at 47 points and quickly dipped to 46.5 on Sunday night. That downward adjustment may not stop there, with bookies selling Under 46.5 at -115, indicating a potential move to 46 points if more money continues to come in on the Under.

UPDATE 7:00 P.M. ET, SUNDAY JAN. 23: The look-ahead line for this game was sitting at Rams -3 (-120) before Los Angeles' Divisional Round matchup with Tampa Bay. And after a thrilling finish to that game, the official opener for the NFC Championship Game hit the board at Rams -3.5. That spread took early action on the 49ers and slimmed the spread as far as Los Angeles -3 (-115) while other books hung on to the half-point hook with both hands, adjusting to Rams -3.5 (EVEN). The total opened at 47 points with the Under priced at -115 and some shops have ticked down to 46.5 points in the minutes since opening. 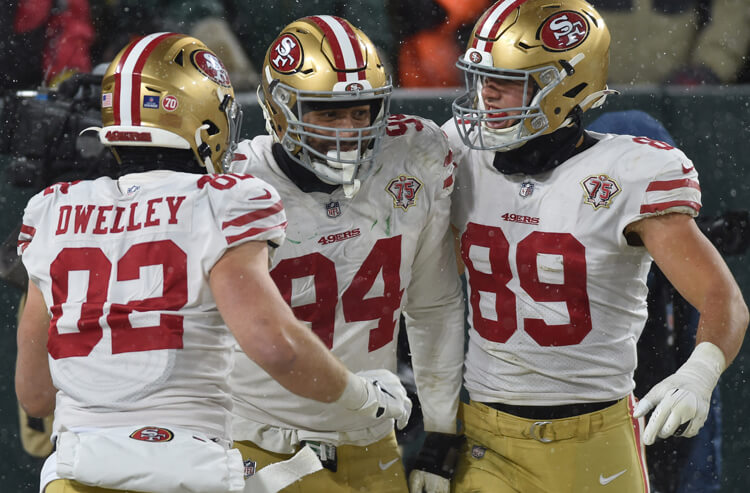