Neither Conference Finals matchup looks especially appealing for the underdogs, but Joe Burrow and his towering receivers will cause major headaches for a banged-up Chiefs secondary. Jason Logan is tagging the Bengals as the spread has grown to +7.5. 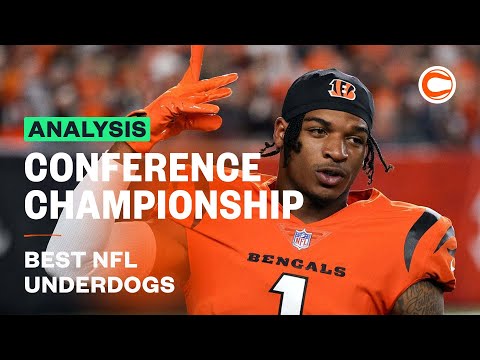 “We’ll see you in the playoffs.”

That’s what Patrick Mahomes told Joe Burrow following the Cincinnati Bengals’ thrilling 34-31 win over the Kansas City Chiefs at home back in Week 17.

Whether those words of encouragement had darker subtext or Mahomes just knew what was coming for him, we’ll find out this Sunday when these brilliant young quarterbacks face off in the AFC Championship Game. This time, the venue swings to Arrowhead Stadium where Cincinnati is as big as a 7.5-point NFL underdog.

And with select sportsbooks dealing that half point hook on the touchdown spread, we’re siding with Cincy as our point spread pick, instead of backing underdog San Francisco +3.5 in the NFC Championship Game – a selection that makes a lot of sense considering the Niners’ history of success versus the L.A. Rams.

NFL picks against the spread for Conference Championship

So, why the Bengals?

Truth be told, I’m not overly warm on either underdog this Championship Sunday, but Cincinnati matches up with a favorite that I feel is overrated while the Rams aren’t getting enough credit for their postseason performance so far.

The Bengals aren’t that far removed from exposing the Chiefs’ softest spots, going back to that Week 17 shootout at Paul Brown Stadium.

Cincinnati trailed by two touchdowns in the first half of that game but sliced up the Kansas City defense in the final 30 minutes, thanks to pinpoint throws from Burrow, big catches from Cincy’s physical receivers, and a defense that was able make Mahomes move around and take away his first-look options.

The Chiefs stop unit is improved from its horrific start to 2021 but the stats from the second half of the schedule are puffed up, due to a lineup of opposing offenses about as threatening as a pillow fight between Snuggle the fabric softener bear and the Pillsbury Doughboy.

Since November, Kansas City has faced divisional rivals Las Vegas (No. 16 in EPA per dropback) and Denver (No. 13 and once with Trevor Siemian at QB) twice, Pittsburgh twice (No. 26), the Giants (No. 31), a Rodgers-less Packers offense, and a Dallas team without its two top receivers for most of the game.

The three other contests in that span came against the L.A. Chargers (No. 7 EPA per dropback), the Bengals (No. 9) and last week’s Divisional Round doozie with the Buffalo Bills (No. 8). Those three foes passed for a collective 964 yards on 69% completions with 10 touchdowns and one interception, amassing point totals of 28, 34, and 36.

In that Week 17 shootout, Cincinnati’s burly receivers were able to body and overpower the Chiefs secondary for grabs and yards after the catch and it wasn’t just Ja’Marr Chase (266 yards and three TDs) making plays either. Receivers Tee Higgins (6-foot-4) and Tyler Boyd (6-foot-2) also had key catches along with TE C.J. Uzomah (6-foot-6).

Kansas City’s secondary limps into the AFC title game (Tyrann Mathieu questionable/Rashad Fenton limited) and 6-foot-1 CB Charvarius Ward stands as its tallest defender in the regular rotation. Not only did Burrow have success hitting his towering receivers for shots over the top but also connecting on shorter intermediate throws, an area he’s been elite at in the second half of the season and something that will help him stay clean with pass protection a major sore spot for the Bengals.

The look-ahead line for this AFC Championship matchup was a soft Kansas City -7 (-107) following the Bengals' win over Tennessee last Saturday. That line slipped to -6.5 before the start of the Chiefs’ game with Buffalo and officially opened as low as -6.5 at some books before a market consensus of a touchdown was met early in the week.

Now, with Bengals +7.5 popping up the closer we get to the weekend, I’m going to take what appears to be an extra point from the opener and get on the other side of the key number with a team that can – and has – kept pace with Mahomes & Co.