The opening line of Rams -3.5 against the 49ers in the NFC Championship game is already seeing some movement and could drop even further. Jason Logan says it's worth waiting to see if the spread narrows even further in Bet Now, Bet Later. 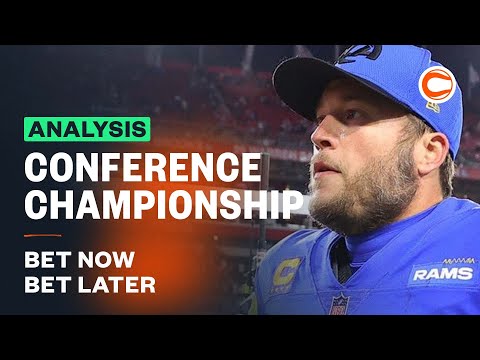 A wild NFL Divisional Round is over and while we catch our breath from those insano games, we plan our attack for Championship Sunday.

With the NFL season down to a final four, the lines have never been tighter. That means getting the best number of your bets is vital. We single out the best spreads and totals to bet now and which NFL Conference Championship lines you should wait on for the AFC and NFC title games.

The Niners and Rams mix it up for a third time this season - and for the second time in four weeks - with this all-NFC West championship game. Los Angeles was -3 (-120) on the look-ahead line before Sunday’s game in Tampa Bay and was as big as -4.5 after building a 27-3 lead over Tom Brady & Co. However, that early-bird spread took a tumble and went off the board at -3.5 once the Bucs tied the game late in the fourth quarter.

San Francisco is coming off an ugly – yet impressive – win at Lambeau Field on Saturday, marking the third straight road win as an underdog for the 49ers. Couple that momentum with a Week 18 come-from-behind overtime victory at L.A. and the Rams’ nasty collapse on Sunday afternoon, and the public’s perception of Los Angeles ain’t great.

However, if you’re buying into what L.A. did in that first half against Tampa Bay, not to mention its wax job of Arizona in the Wild Card Round, wait and see if the juice on -3 slims or if we actually get a -2.5 sometime in the next few days. The Rams closed as a 3.5-point home chalk in that Week 18 finale with San Francisco, so this one should head south of that considering the 49ers have won six straight games over their NFC West rivals (5-1 ATS in that span).

Perhaps lost in the banana-balls finish to the Bills-Chiefs Divisional Round shootout was the fact that Kansas City gave up what should have been two game-winning drives to Josh Allen. It just so happens they have Patrick Mahomes, Tyreek Hill, and Travis Kelce to bail them out.

The Chiefs allowed 313 yards through the air (eight yards per attempt), watched Buffalo go 3 for 3 in the red zone, and couldn’t keep the Bills out of the end zone in those crazy final minutes. If it wasn’t for the TD-ending overtime rule, Buffalo and Kansas City could still be going at it.

The total for the AFC Championship Game opened at 53.5 at offshore shops and the mainstream operators posted the number around 51.5 but quickly got in line, tacking on two more points. Some books went to 53 flat but pumped the vig on the Over to -115 before adding the extra half point. With blood still pumping through bettor’s veins after that firefight at Arrowhead, this total will likely climb.

Cincinnati has a potent downfield punch on offense with Joe Burrow, Ja’Marr Chase, and a talented group of receivers, and the Chiefs' already-thin secondary runs the risk of missing stud safety Tyrann Mathieu (concussion), who left early into Sunday’s game. As for the Bengals defense, it’s actually been outgained in their two postseason wins and should have allowed a lot more points if not for the Raiders’ red-zone failings and, well, Ryan Tannehill.

Cincinnati hosted Kansas City on January 2 and the teams combined for 65 points on 889 combined yards with home run passing plays from both QBs. If you’re banking on more high-scoring football in Arrowhead, jump on the Over 53.5 now.

NFL Conference Championship Odds To Bet Now, Bet Later: Wait on Rams, Hammer the Over in KC
Provided by