College football odds for Week 14 are on the betting board and getting action, as this COVID-wracked season moves into December. Plenty of big-name programs are in action, but Coastal Carolina hosting Liberty loomed as arguably the most intriguing game – until COVID issues with Liberty's program shelved that matchup.

These are the current College football Week 14 odds for the premier games on the schedule, as of November 30. Click on each matchup in the table below to get updated in-depth information on the opening lines, sharp money, public betting and odds movement as we get closer to kickoff.

Another game, another huge double-digit spread for Clemson, which is favored by 21 points or more for the eighth time this season. As of Monday night, there's no movement at FanDuel on the opener of Clemson -21.5. Early ticket count and money are both well beyond 9/1 on the Tigers. The total remains at 66.5, with 66 percent of bets and 99 percent of money on the Over.

UPDATE 3:30 P.M. ET THURSDAY: Fortunately, unbeaten Brigham Young (9-0 SU, 6-2-1 ATS) was waiting in the wings after Liberty had to cancel, and the Cougars will head cross-country to face fellow unbeaten Coastal Carolina. FanDuel opened BYU -9.5 Thursday afternoon, and ticket count/money are both running 3/1 on the Cougars, despite the lengthy road trip on short notice. The total of 61.5 is seeing practically every early ticket and early dollar on the Over.

Coastal Carolina is not only solid on the field at 9-0 SU, but is great for bettors at 7-1-1 ATS. The Chanticleers were set to take on Liberty, another solid team SU and ATS (9-1 and 8-2, respectively). But COVID issues in the Flames' program forced the cancellation of the matchup Thursday.

Ohio State's Week 13 game at Illinois was canceled due to COVID issues within the Buckeyes' program, and the status of this week's game is not yet clear. DraftKings still decided to put the game up at Ohio State -22.5 and moved to -23.5 Monday, but betting splits aren't yet available. The total at DraftKings moved from 59.5 to 60.5 and back to the opener by Monday afternoon.

UPDATE 5 P.M. ET THURSDAY: The Cyclones moved from -6.5 to -7.5 and back at DraftKings, where Iowa State is grabbing 77 percent of point-spread tickets, but just 57 percent of dollars bet. The total at DK moved from 48.5 to 49.5, despite 52 percent of bets and 66 percent of money on the Under.

As of Monday night, this line hasn't budged at FanDuel, though ticket count is 3/1 and money approaching 9/1 on the host Cyclones. The total is down two points to 48.5, with tickets and money running 4/1 on the Under.

UPDATE 1 P.M. ET SATURDAY: Wisconsin ticked from -13 to -13.5 in the past hour at PointsBet USA, but Indiana is attracting more than 70 percent of money and tickets. The total is at 44.5, with 87 percent of bets and 88 percent of money on the Over.

UPDATE 8:30 P.M. ET FRIDAY: PointsBet USA started the Badgers at -10, spent a few hours at -9.5, and the line then shot up to -13 in one fell swoop while on its way to -14. Wisconsin is now -13. "Good two-way action on the spread, with 72 percent of bets on Indiana, but 58 percent of handle on Wisconsin," PointsBet's Patrick Eichner said. The total opened 50.5, then adjusted straight to 45.5 on the info of Indiana QB Michael Penix Jr (torn ACL) being out. The total is now 44.5, but 90 percent of tickets and money are on the Over.

UPDATE 5 P.M. ET THURSDAY: DraftKings opened this game at Wisconsin -10.5, and the first move perhaps surprisingly was to -9.5, but the line then ballooned to -14.5 by Tuesday and is now -14. However, even though Indiana won't have star QB Michael Penix Jr. (torn ACL), the Hoosiers are drawing 84 percent of spread tickets and 63 percent of spread money. The total made an even bigger move, but in the opposite direction, from 51.5 to 45.5, although 84 percent of bets/70 percent of dollars are on the Over.

Indiana lost star quarterback Michael Penix Jr. to a torn ACL suffered in the Week 13 win over Maryland. With that in mind, it's no surprise that DraftKings opened Wisconsin a double-digit favorite, though the first move on this line was from Badgers -10.5 to -9.5. The total is already down two points Monday night, to 49.5. Betting splits aren't yet available.

FanDuel hasn't budged off Sooners -21.5 as of Monday night. Oklahoma is taking 52 percent of tickets and 82 percent of money on the spread. The total moved from 62.5 to 63.5 and back, though splits aren't yet available on the total.

UPDATE 9 P.M. ET FRIDAY: The Aggies opened -6, peaked at -7 and are now down to -5.5 at PointsBet USA. "Another game with good two-way action," PointsBet USA's Patrick Eichner said. "Sixty-seven percent of spread bets and 58 percent of spread handle on Auburn." The total moved from 47.5 to 50.5, then backed up to 48.5, with 74 percent of tickets on the Over and 71 percent of money on the Under.

Texas A&M actually has designs on the College Football Playoff, but certainly has to win this week to keep such hopes intact. Bettors at FanDuel have already pushed this number to Aggies -6.5, with practically every ticket and every dollar on A&M through Monday night. The total is up to 49.5, with 84 percent of bets and 94 percent of money on the Over.

UPDATE 7:15 P.M. ET SATURDAY: Alabama went from -28.5 to -29.5 at The SuperBook. "Surprisingly low volume to this point, but what do you expect when Bama was favored at home last year and now is laying 30-ish on the road less than 13 months later?" SuperBook risk manager Rex Beyers said. "It just goes to show how crazy this season has been. I would think in the last hour before kickoff, there will be people betting both sides of that game, because regardless of the spread, it is 'Bama-LSU. But we'll see."

Before this crazy season, Alabama-LSU was certainly circled on everyone's calendar, with the perennial national title-contending Crimson Tide meeting the defending national champion Tigers. But LSU has dropped off significantly, certainly not helped by key players who opted out of the season due to COVID concerns.

UPDATE 9 P.M. ET FRIDAY: Southern Cal fell from -14 to -13 early in the week at PointsBet USA, but the Trojans are attracting 71 percent of tickets and 68 percent of money on the spread. The total moved from 67 to 68.5 on what PointsBet's Patrick Eichner described as limited action.

UPDATE 5 P.M. ET THURSDAY: Southern Cal is currently -13.5 at DraftKings, in a game that's been moved to Sunday. DraftKings' betting splits aren't yet available for this matchup. 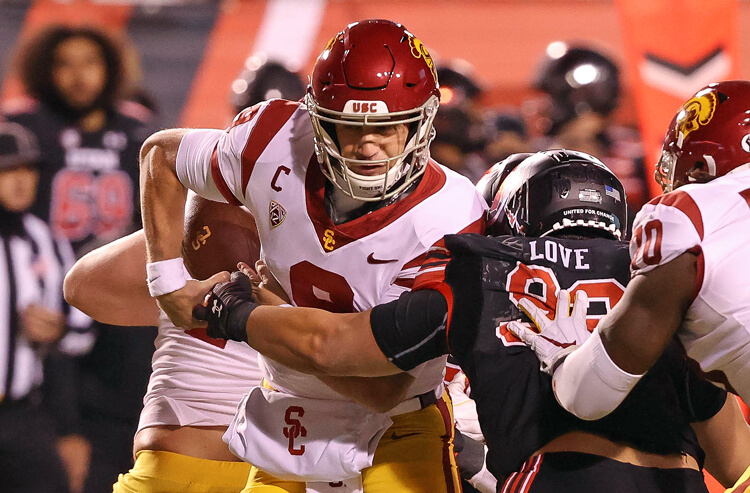