Alabama vs LSU Picks and Predictions for December 5

It was pushed back a few weeks, but we finally get to see Alabama take on LSU. The Tigers got the better of the Crimson Tide last season, but now Bama has a chip on its shoulder and is out to prove who has the better program.

And talk about the difference a year makes. Last season, Alabama was a 5-point home favorite, but this season the Tide is laying a whopping 28.5 points on the road. Can the Tigers keep it competitive, or will this be another Bama blowout?

Here are our best college football free picks and predictions for No. 1 Alabama at LSU, with kickoff set for Saturday, Dec. 5 at 8:00 p.m. ET at Tiger Stadium in Death Valley.

It should be a beautiful December night for some football in Baton Rouge. The forecast is calling for clear skies, with temperatures in the mid-40s, and minimal wind. Be sure to monitor the gametime conditions with our NCAA football weather info.

Home field advantage has not mattered in this rivalry lately, with the road team going 4-0 ATS in the last four meetings. Find more NCAA betting trends for Alabama vs. LSU.

LSU went into Bryant-Denny Stadium last season and defeated Alabama 46-41 as 5-point underdogs in one of the most anticipated college football games of the century. Then, the Crimson Tide had to sit back and watch as the Tigers went on to win the national championship as arguably one of the greatest college football teams in history.

Unfortunately for LSU, most of the players and coaches responsible for that title are gone, and Alabama hasn’t gone anywhere.

The Crimson Tide are a perfect 8-0 this season and are looking better and better with each passing week. The most impressive part is that Alabama keeps taking down massive spreads along the way, going 5-0 ATS in their last five games, and are 6-2 ATS overall while laying an average of 23 points on the season.

Quarterback Mac Jones is in the middle of the Heisman conversation. Jones is completing 76.2 percent of his passes for 2,728 yards with 23 touchdowns compared to just three interceptions, and is throwing to arguably the best receiving corps in the country, even while losing Jaylen Waddle to injury. Jones also has the luxury of having Najee Harris in the backfield.

They’ll face an LSU defense that has more holes than a Tiger has stripes. LSU is allowing nearly 450 yards per game - over 300 of those go to the passing game - while giving up over 30 points on average.

But now, the Tigers’ offense might be catching up to their defense. QB Myles Brennan is done for the year, and now top WR Terrace Marshall Jr. has opted out for the remainder of the season. Backup QB T.J. Finley struggled at times last week against Texas A&M, so don’t be surprised if Max Johnson gets some play, or even the start in this game. There is a lot for LSU to overcome for this one to stay close.

If you like Alabama, bet them now. This line will only continue to grow the closer we get to kickoff. Roll Tide.

The biggest question for Alabama early on this season was whether or not the defense would be able to do a good enough job to support the offense. The Crimson Tide defense allowed an average of 28.8 points over its first four games, but since then, they have allowed 33 total points in four games.

LSU, as mentioned, is now struggling on offense. The Tigers are coming off a game where they put up just seven points against Texas A&M, they have questions at the quarterback position, they just lost their most talented playmaker, and are getting absolutely nothing out of the run game, which is averaging just 3.2 yards per carry this season.

Alabama should score in bunches, but that happened in each of the last four games and the Under went 3-1 with an average total of 63.5. Food for thought: 49-17 is still Under. This total is a touch too high, considering LSU’s offensive issues.

Betting Alabama on the first half spread is becoming a bit of a tradition, mostly because they cover it at such a good rate and have done so in each of the last four games. The Tide puts up an impressive 26 first-half points per game, while LSU has put up just 7.7 first-half points over its last three games. This is a good number to grab Bama at. 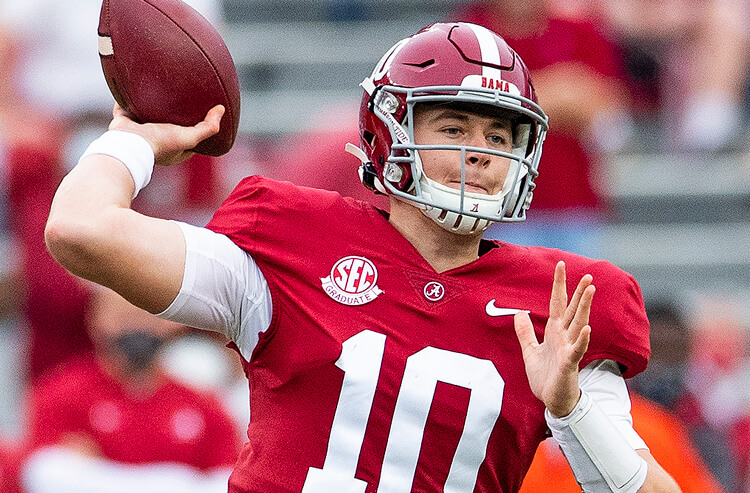 Alabama vs LSU Picks and Predictions for December 5
Provided by