Oregon vs California Picks and Predictions for December 5

So a Duck and a Bear are sitting next to each other in a bar out west. The Duck throws back a shot, looks at the Bear and says, “You lose to your arch-rival, too?” And the Bear says, “No, I just ate a couple guys, and I thought I would enjoy a drink.” Heyyy-oh! Man, that joke never gets old, primarily because that will be the first and last time it’s ever told.

Yep, both Oregon and Cal are coming off tough losses last week, and they’ll get to take out their frustrations on each other this weekend. Here are our best college football betting picks and predictions for No. 23 Oregon at Cal, with kickoff scheduled for Saturday, December 5 at 7:00 PM.

It’s going to be pleasant and cold on Saturday evening in Berkeley. Look for a high of 39 degrees with wind out of the east-southeast at 4 mph and no chance of precipitation. Be sure to monitor the gametime conditions with our NCAA football weather info.

The Ducks are 7-2 ATS in their last nine meetings with the Golden Bears. Find more NCAA betting trends for Oregon vs. California.

I don’t know you anymore, Oregon. The Ducks were one of my favorite early season teams to follow, but they gave away last week’s rivalry game against Oregon State. Playing in a dense fog, the Ducks turned the ball over three times, allowed the Beavers to score with less than a minute remaining and lost 41-38—their first loss of the season. Oregon had the game in hand but allowed Oregon State to score 22 points in the final quarter.

As bad as that loss was, Cal’s was even worse. The Golden Bears remained winless on the season after falling to Stanford 24-23 on Friday night. Cal was on its way to forcing overtime after scoring a touchdown with about a minute to play. However, kicker Dario Longhetto missed the extra point, giving the Cardinal a victory and dropping Cal to 0-3 on the year.

This feels like a sucker bet to me because everyone will be on the Ducks and lay what seems like a short number considering how bad the Bears are. And yet, I can’t help myself. Cal is 1-6-1 ATS in its last eight home games, and I think the Ducks get right in this spot.

Despite their disappointing loss to the Beavers, Oregon has scored at least 35 points in every single game this season. The Ducks are also banged up, which should give Cal a few opportunities to get on the board, and the Over is 5-0 in Oregon’s last five road games.

Cal is a suspect team – as evidenced by their struggles this season – but I was surprised to see the Golden Bears rush for 251 yards on the ground last week. Chase Garbers is good enough to complement that ground game with his arm, and my money is on the Golden Bears surprising us offensively—even if I think Oregon will pull away and cover.

And that’s no joke.

Did you know that if you parlayed today’s NCAA Oregon vs. California picks, you could win $59.58 on a $10 bet? 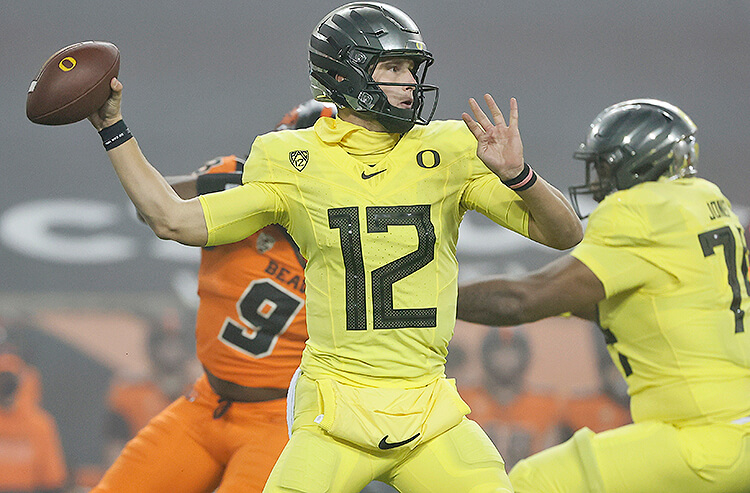 Oregon vs California Picks and Predictions for December 5
Provided by