Appalachian State and Louisiana won’t meet in the Sun Belt championship game for the first time in the game’s short three-year history, as the Coastal Carolina Chanticleers dethroned the Mountaineers in the East Division.

So, if App State wants to get its licks in against the 24th-ranked Ragin’ Cajuns (who have already clinched the West Division) it will have this week. And oddsmakers like the Mountaineers' chances, setting them as 3-point home favorites.

Let’s check out our best college football free picks and predictions for No. 24 Louisiana at Appalachian State, with kickoff set for Friday, Dec. 4 at 7:00 p.m. ET.

It could be a messy night in Boone, North Carolina. The forecast is calling for showers throughout the day, but as the temperature drops near freezing around kickoff, there is even a chance for some snow. Wind shouldn’t be much of a factor for this game. Be sure to monitor the gametime conditions with our NCAA football weather info.

Appalachian State has had Louisiana’s number. Not only have the Mountaineers defeated the Ragin’ Cajuns in each of the last two Sun Belt conference title games, but they have won all eight meetings since both started playing yearly back in 2014. Find more NCAA betting trends for Louisiana vs. Appalachian State.

So, while Louisiana may have already booked its ticket to a third consecutive conference title game, there is still plenty to play for. Heck, the Ragin’ Cajuns still have an outside shot at a New Year’s Six bowl game. That would require a conference title and likely a win in Boone on Friday, which won’t be easy.

Appalachian State is 7-2 on the season, with its losses coming to No. 14 Coastal Carolina and No. 15 Marshall, both of which are undefeated—and the Mountaineers were actually leading their game against the Chanticleers until the final minutes of the fourth quarter.

The Mountaineers are a run-heavy offense led by dual-threat QB Zac Thomas. The senior signal-caller has thrown for 1,775 yards with 17 touchdowns and eight interceptions while adding another 273 yards and two scores on the ground. Thomas has the support of a two-headed monster in the backfield: Camerun Peoples and Daetrich Harrington both have nearly 600 yards on over 5.5 yards per carry and six touchdowns this year.

They will be key against a Cajuns defense that has shown much improvement this year, particularly against the pass, but is still getting gouged for nearly 180 rushing yards per game.

Louisiana has just one loss on the year, also coming at the hands of Coastal Carolina on a last-second field goal. But it has been perfect otherwise, including a win over Iowa State, now considered the favorite to win the Big 12.

The Ragin’ Cajuns are also a run-first team led by stud back Elijah Mitchell. The senior RB has 656 yards on 6.0 yards per carry and seven scores this season. But if Louisiana wants to end their skid against the Mountaineers, they’ll need a big game out of QB Levi Lewis. The dual-threat QB is capable of attacking teams downfield but needs to improve on his accuracy and cut down on the mistakes. Unfortunately, Lewis could be down his top receiver in Peter LeBlanc and faces a Mountaineers stop unit that ranks 13th nationally in yards against – and 15th in points allowed – per game.

This is a hard one to call. Louisiana is already in the Sun Belt title game and could have its focus elsewhere, while App State would love nothing more than to prove it's still the better team in this matchup. Considering also that Louisiana is just 1-5 ATS in its last five games against teams with a winning record, we'll lay the field goal with the home side.

The Under has been the total bet to make when these two Sun Belt rivals have crossed paths, with the number going 2-6 O/U in the last eight meetings—and maybe sportsbooks are catching on. The total for Friday’s matchup is on the board at 53.5 as of Monday afternoon, which would be the lowest total these teams have seen since 2016.

Louisiana averages 35 points per game, while Appalachian State comes in at 32.8. While it’s unlikely these teams hit those averages, due to a pair of good defenses, they are both certainly capable of scoring: the last time they met, for the Sun Belt title last year, that game featured nearly 1,000 yards of total offense and 83 points.

Additionally, there is little differentiating how Louisiana and Appalachian State played conference leader Coastal Carolina: all three teams run the football and play, for the most part, solid defense.

Both of those games ended with a total of 57 points. This one is a good bet to go Over.

Take the Mountaineers to have a lead after the opening frame.

Did you know that if you parlayed today’s NCAA Louisiana vs. Appalachian State picks, you could win $65.44 on a $10 bet? 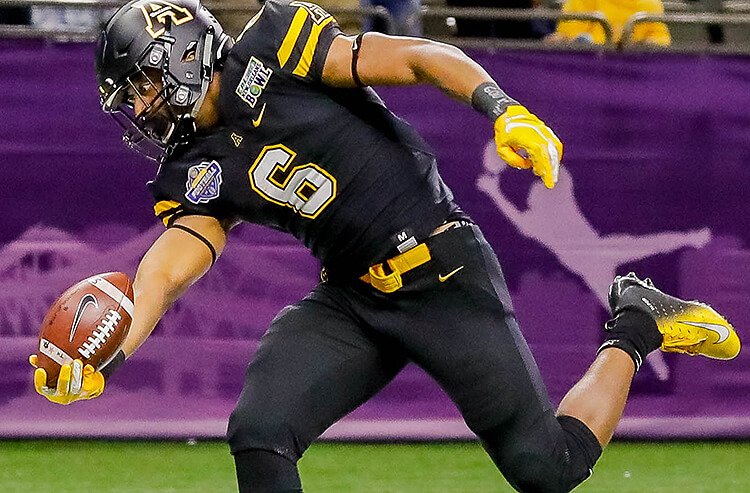