Texas vs Kansas State Picks and Predictions for December 5

And there it is! As predicted, Iowa State came though not just with a cover against the Longhorns last week, but an outright win. And why would a Texas alum like me take some sort of perverse joy in that? Because the college football betting world now realizes that it’s only a matter of time before Tom Herman is fired in Austin. The Horns are officially out of the Big 12 title race and firmly entrenched in the battle to sign Urban Meyer.

Still, the Horns have football to play, and with that, we bring you our best college football free picks and predictions for Texas at Kansas State, with kickoff scheduled to get underway on Saturday, December 5 at 12:00 p.m.

Not too shabby, Manhattan. The forecast on Saturday is calling for sunshine and a high of 49 degrees, with wind out of the west-northwest at 8 mph and virtually no chance of showers. Be sure to monitor the gametime conditions with our NCAA football weather info.

Let me give you a completely biased description of what happened in last week’s 23-20 Texas loss to Iowa State: The Horns led for more than 58 minutes of this game. They inexplicably tried a fake punt in their own end of the field when they held the lead and ended up a few yards short of converting. They failed to convert a fourth and one late in the game when a short field goal would have put them up by a touchdown. And senior quarterback Sam Ehlinger took an ill-advised sack on the team’s final possession that forced the Horns to kick a 57-yard field goal, which of course, was no good. That’s how you eliminate yourself from title contention and get fired.

Kansas State has been even worse, though when you adjust for expectations, it’s hard to say who has been the bigger disappointment this season. Playing with backup quarterback Will Howard, the Wildcats fell 32-31 to Baylor and have now dropped four straight games. Howard has been a tough watch, and completed 9-18 passes for 88 yards, one touchdown and two interceptions.

The Wildcats are a bad football team, but this double-digit spread at home is too high. The Longhorns are 0-6 ATS in their last six meetings in Manhattan, and their conference championship hopes have been dashed.

The one thing that Kansas State absolutely will not want to do in this game is get into a throwing contest against Texas. Though Howard was ineffective through the air against the Bears, the Wildcats do have the ability to run the ball, and they’ll want to keep the Horns offense off the field. The Under is 6-1 in the last seven meetings between these teams, and that’s the play here.

Texas offensive lineman Samuel Cosmi decided to opt-out this week in order to prepare for the NFL draft, and that’s not an area where the Longhorns have much depth. Add in a lame-duck coach and a team with little motivation, and I’m not expecting a huge effort from a Horns offense that can disappear at times. 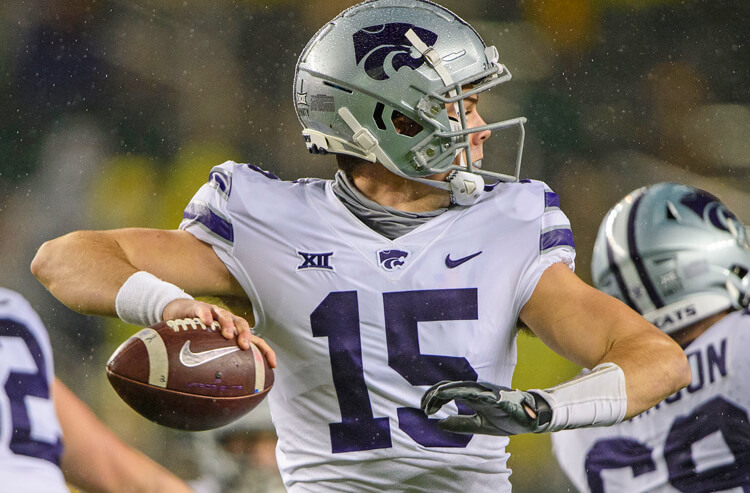