Washington State vs USC Picks and Predictions for December 6

Cue up Carrie Underwood. Give me some Tony Dungy telling me how to motivate the players. Let’s see Cris Collinsworth slide into the picture like he just mastered Rubik’s Cube.

But if you love college football betting, then you’ll welcome a Pac-12 matchup this weekend between Washington State and USC that has been pushed back a day. In fact, let’s just hire a random dude named Barry Underwood to make up a song and sing it to us before the game.

Here are our college football free picks and predictions for Washington State at No. 20 USC, with kickoff scheduled to get underway on Sunday, December 6 at 7:30 p.m. ET.

You can expect clear skies and a temperature of 46 degrees on Sunday evening. A light wind will be out of the northeast at 2 mph with no chance of rain. Be sure to monitor the gametime conditions with our NCAA football weather info.

The road team is 6-1 ATS in the last seven meetings. Find more NCAA betting trends for Washington State vs. USC.

Washington State’s matchup against Stanford was canceled last week because of COVID-19, so the last time we saw the Cougars they dropped a 43-29 decision to the Oregon Ducks in mid-November. This isn’t Mike Leach’s team any longer, and thus, Wazzu has more of a balanced attack, relying on the arm of quarterback Jayden de Laura and the feet of Deon McIntosh. De Laura is a freshman who has thrown for 548 yards and four touchdowns, while McIntosh has piled up 234 yards in just two games.

The Trojans also had their most recent game canceled, and that battle against Colorado would have told us quite a bit about USC. What we do know is that they’re coming off a 33-17 win against a Utah team that remains winless on the season. USC is averaging 31.7 points per game and is led by quarterback Kedon Slovis, who is completing more than 70 percent of his passes and already has 970 yards throwing the football this year.

So which USC team will make an appearance on Sunday night? The one that needed two miracle comebacks to start the season 2-0? Or the one that dominated a talented Utah squad? The Utes have not been as good as advertised this season, and I’ll gladly take two touchdowns in a game that could easily feature a backdoor cover.

Before their win against what looks to be a terribly overrated Utah team, the Trojans gave up 28.5 points per game against Arizona State and Arizona. I expect the Trojans defense to show more of the question marks that we saw in their first two contests, and the Over is 6-1 in Washington State’s last seven conference games.

Slovis is a star and he’s got a ton of weapons at his disposal. The Trojans are averaging 470.3 yards per game on offense, and the Cougars just finished allowing Oregon to drop 43 on them. USC should score plenty on a chilly night in Los Angeles. Let’s just hope Barry is warming up those pipes. 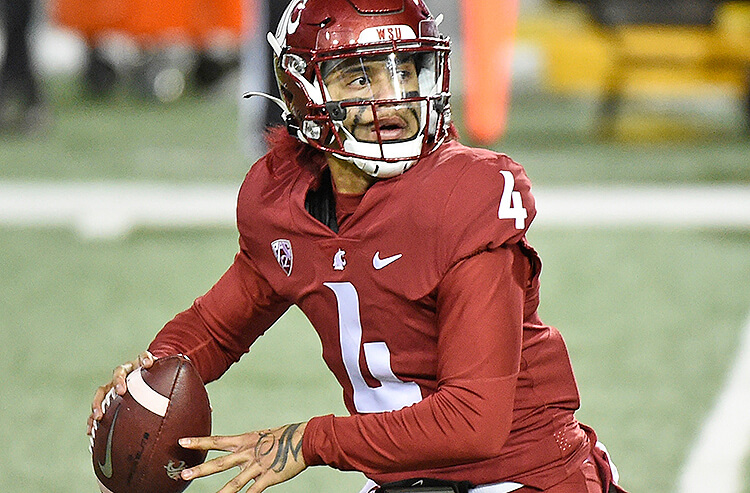