It looks like the only thing standing between Ohio State and another Big Ten title is a COVID-19 outbreak. If the Buckeyes have another game canceled, they won’t have played enough games to be eligible for the conference championship game.

For now, they have their sights set on Michigan State this weekend where college football odds have the undefeated Buckeyes laying 24 points against the Spartans on the road.

Let’s check out our best college football betting free picks and predictions for Ohio State at Michigan State, with kickoff set for Saturday, Dec. 5 at 12:00 p.m. ET in East Lansing.

It’s going to be a chilly afternoon in East Lansing. The forecast is calling for clear skies, but a 10 mile per hour wind gusting from the north will have temperatures feeling below freezing at game time. Be sure to monitor the gametime conditions with our NCAA football weather info.

Ohio State is coming off its second COVID-imposed bye of the season but maybe it needed the break to re-focus. After a strong start to the season, Ohio State was a little sloppy against Rutgers and was given a real scare by Indiana as the Buckeyes failed to cover big spreads – by more than two touchdowns – in each game.

But Ohio State will have a chance to get things right against Michigan State. Yes, the Spartans are coming off an upset of Northwestern, but the Wildcats did everything they could to give that game away. The Sparty defense has been serviceable but is giving 31 points per game and now it must deal with Justin Fields.

The Buckeyes’ star QB is coming off his worst game of the season, where he completed a season-low 60 percent of his passes and threw his first three picks of the year against the Hoosiers. That said, Fields has still thrown for 1,208 yards with 13 touchdowns in just four games.

He has a pair of great weapons on the outside in Garrett Wilson and Chris Olave and a strong duo in the backfield with Master Teague III and Trey Sermon, who each average over five yards per carry. Ohio State just creates matchup problems all over the field.

But the big problem for Michigan State in this game will be their offense. The Spartans rank 112th in total yards per game and 117th in points scored (18 per contest). QB Rocky Lombardi has struggled with his accuracy and decision making, completing just 54.1 percent of his passes and has as many interceptions (eight) as touchdowns. Michigan State also hasn’t gotten anything out of the running game, which ranks 122nd in the country in yards per game.

Ohio State still has some things to work on but the season quickly winding down and the potential of not getting to the conference title game means added importance to each game. On top of that, Michigan State is not like Indiana and won’t be able to keep up with the Buckeyes in this one.

The total for this Big Ten battle is on the board at 59.5 as of Tuesday evening—and that might be a touch too low.

First. it's too low because Ohio State will approach close to 40 points once again. Indiana was arguably the toughest defense they have faced thus far and they put up 42 points in that game. So that means we’re looking for roughly 20 points from the Spartans.

While Michigan State averages just 18 points per game, they’ve been a little Jekyll and Hyde. The Spartans scored a total of seven points against Iowa and Indiana, while in their other three games they averaged 27.7 points. That number should probably be slightly lower, due to a last-second fumble recovery in the end zone against Northwestern.

But the point is, Michigan State can score at times and Lombardi faces an Ohio State pass defense that has been burned a lot this season, ranking 119th in passing yards allowed per game. The Spartans should do just enough in this game to send this one Over.

Did you know that if you parlayed today’s NCAA Ohio State vs. Michigan State picks, you could win $62.89 on a $10 bet? 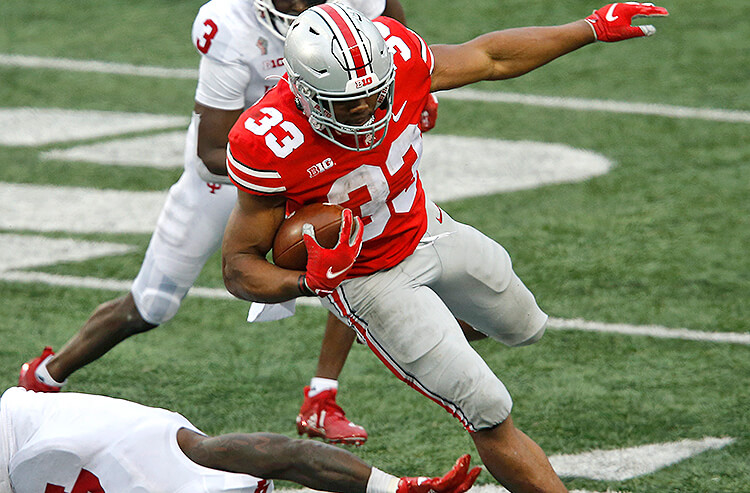