Washington is 4-1 ATS against the NFC East this year, and is 5-4 SU in non-Dwayne Haskins starts with a gorgeous 7-2 ATS mark.

Sunday night will dictate the division winner of the NFC East. That may not excite most, but for the Washington Football Team, a win over the eliminated Philadelphia Eagles means a trip to the 2020 postseason.

It’s a win and you’re in for Washington but who will be under center in Week 17 isn’t as clear. The team released Week 16 starter, Dwayne Haskins, following their 20-13 loss to the Panthers last Sunday. If QB Alex Smith is healthy, it will be his team to lead. If his calf injury is too much, undrafted 27-year-old Taylor Heinicke will try to lead Washington to its first playoff berth since 2015.

Sunday’s final game opened Philadelphia -1 but has moved to Washington -1 on most books. If Alex Smith is deemed the starter, this line could swing closer to -2.5 for the Football Team. The total of 42.5 is the lowest on the board in Week 17.

Here are our NFL free Washington vs Eagles picks and predictions for Sunday, January 3 (8:20 p.m. ET).

Temperatures in the low-40s and a 70 percent chance of rain are in the forecast for Lincoln Financial Field on Sunday night. Winds of 8-10 mph are also expected. Be sure to monitor the gametime conditions with our NFL weather info.

The Under is 8-0 on the Football Team’s last eight games on grass. Find more NFL betting trends for Washington vs. Eagles.

Now that Washington has released the distraction that was Dwayne Haskins, it can focus on beating an Eagles team that got thumped by Andy Dalton and the Cowboys 37-17 last week.

Washington is 4-1 ATS against the NFC East this year but has only been favored in two games all year (1-1 ATS). Despite the lack of confidence from the books, Washington is 5-4 SU in non-Haskins starts with a gorgeous 7-2 ATS mark.
A big part of Washington’s success will be on the ground with Antonio Gibson, who returned from injury last week, and whether or not star WR Terry McLaurin can suit up after missing last week with an ankle injury.

Gibson has been one of the better under-the-radar backs this year, averaging 5.9 yards per carry over his last four games and McLaurin has hit 70-plus yards in 10 of his 14 games. If QB Alex Smith and McLaurin can suit up in this all-important matchup, this line could move north of -1.

It was only four weeks ago that the Philly faithful thought that Jalen Hurts was going to be the team’s savior, but after their win against the Saints, Hurts and the Eagles dropped two winnable road games against the Cardinals and Cowboys. And just like that, the Philadelphia Eagles have nothing to play for in Week 17.

We wouldn’t be surprised if a collection of the team’s injured players sat out the season finale, such as defensive linemen Fletcher Cox, Derek Barnett and Josh Sweat — all of whom have played over 400 snaps this year.

Of course, that is just speculative, but this defense needs all the help they can get after getting humiliated by the Cowboys last week. Dalton threw for a season-high 377 yards and completed three passes of 50-yards or more.

The Eagles love giving up the big play as this banged-up secondary is allowing 13.4 yards per completion and the 26 completions against over the last three weeks. If Washington can get WR McLaurin back, he could be in for a huge game.

The Washington defense will likely finish the year as the third-best overall DVOA defense, per Football Outsiders. Rookie DE Chase Young is PFF’s 6th-best edge defender and will get to tee-off on a Philly O-line that is allowing a league-high 4.1 sacks per game. Even the quick-footed Hurts has taken nine sacks in his last two starts.

Washington has hit the Under in four straight games and is 5-10 O/U on the year. That 36 percent ROI on the Under is the league’s third-best mark. Washington gets to play for a division title against an Eagles offense that mustered just 17 points off the Cowboys, who are giving up over 30 points per game. With three weeks of tape out on the Hurts offense, head coach Ron Rivera will have plenty of footage against the rookie QB.

The Eagles may have hit the Over in all three of Hurts’ starts, but before that, Philly was 0-6 O/U in its previous six games. This is a Philly secondary that could get lit up by 95 percent of NFL teams, but the Washington passing attack is ranked dead-last in DVOA pass offense. If McLaurin can’t go, this team is going to be handing off more than a lazy delegating co-worker, especially if Smith sits.

With a total of 42.5 and betting the Under, we’re doubting that either team hits the 25-point mark with a spread of -1. In Washington’s last 10 games, only three times has either team reached 25 points.

The Washington defense has allowed 25 points or more once in the team’s last 10 games while its offense has failed to hit the 25-point mark in 11 of its last 14 games. If there were ever a team to bet on a race to 25 points — neither prop, it’s the Washington Football Team.

Philly has been battling injuries more so than any other team this season and may pull a no-show Sunday night after a long season of disappointment. At even money, we are hoping for another primetime Under that should be close considering the strengths of the Washington defense and the weaknesses of its offense. 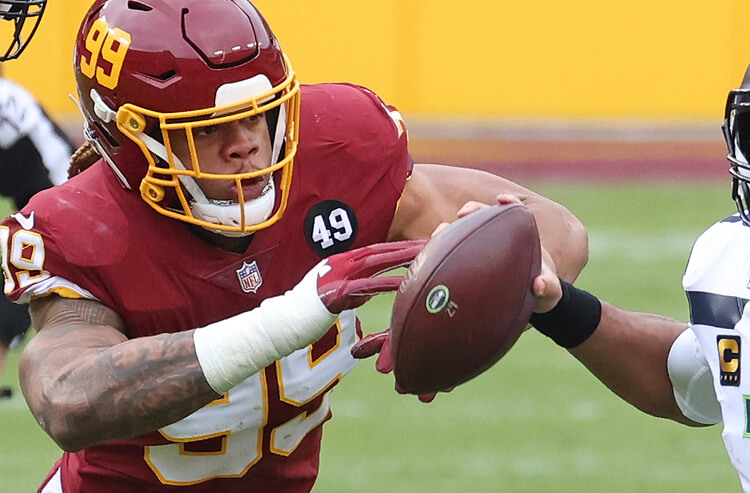 SNF Picks and Predictions: Washington vs Eagles
Provided by