Drew Brees and the Saints offense broke out in a big way in Week 16, as New Orleans scored a season-high 52 points in a win over the Minnesota Vikings on Christmas Day.

Editor's note: this preview was written prior to Saints RB Alvin Kamara being ruled out due to a positive COVID-19 test.

In a normal season, finding NFL betting value in a Week 17 matchup between an 11-4 team and a 5-10 squad would be difficult. But this season has been anything but normal.

The Saints have already clinched the NFC South title and sit second in the conference, but still have a shot at the No. 1 spot, which comes with home field and the all-important bye. NFL odds opened at Saints -4.5 but that spread has swelled to 6.5 points as bettors are banking on New Orleans going all out to take care of business, while the total sits at 47.5, a sharp drop from the opening mark of 51.

Here are our best NFL free picks and predictions for the New Orleans Saints vs. Carolina Panthers on Sunday, January 3 with kickoff set for 4:25 p.m. ET.

It will be a nice day at Bank of America Stadium on Sunday, as there is no expected precipitation, with temperatures sitting around 55 degrees and a 6 mph wind. Be sure to monitor the gametime conditions with our NFL weather info.

New Orleans is 6-1 ATS in its last seven games against the NFC South. Find more NFL betting trends for Saints vs. Panthers.

The Saints have an unlikely shot at the NFC's top seed – they need to win plus have the Packers lose AND Seattle win – but a victory will still ensure New Orleans finishes no lower than second in the conference, which means guaranteed home field through the first two playoff rounds.

The biggest question surrounding the Saints through the final quarter of the season was how explosive the offense would be once 43-year-old QB Drew Brees returned from injury: He came back in Week 15, but was clearly less than 100 percent and looked hesitant in a loss to Kansas City, while star RB Alvin Kamara had topped 54 rushing yards just once in his last seven games.

But then came a Week 16 Christmas gift, as the Saints blitzed the Minnesota Vikings 52-33. Kamara ran for 155 yards and six touchdowns, while Brees completed 73 percent of his passes for 311 yards (albeit two interceptions) and looked much more confident in his reads and throws, despite still being noticeably hampered by his busted ribs.

Now, that 52-point outburst came against a Vikings defense that totally threw in the towel at the end of the season, but in Week 17 the Saints are facing a Carolina defense that is 25th in DVOA defense, per Football Outsiders. The Panthers are coming off a win over Washington in which they abused Dwayne Haskins early to take a 20-0 lead, but almost coughed it up to Taylor Heinicke and hung on to win 20-13, while generating just 280 total offensive yards—not the most inspiring performance.

It was just the Panthers' second SU win in their last 10 games, although they are 5-2 ATS in their last seven. Unfortunately for them, the current version of Brees is still far superior to Haskins or Heinicke and the Saints defense is just as good as Washington's (No. 3 in total DVOA).

The Saints have also covered in six of their last eight games and need this win. They will take care of business.

As mentioned above, the total for this game opened at 51, but plenty of action on the Under has moved this number down to 47.5. I view that as an opportunity to cash in on the Over, as we have a few more points to play with.

Kamara's six rushing touchdowns last week tied the NFL record, which was set in 1929. That was fun. It also marked the third straight Saints game that went Over the total and puts them at 9-2 O/U this season with Brees under center.

The Panthers, despite their inconsistent offensive play, have still topped 20 points in four of their last five games. Even if they manage, say, 17 points, I have confidence that New Orleans can carry the load to get this Over the number.

The Over has also cashed in the last four head-to-head meetings. While I would prefer to wait and see if more Under action pushes this number to – or through – the key number of 47, I'm still confident in betting the Over as it currently stands.

The Panthers may not have anything to play for, but Teddy Bridgewater is playing to prove that he can still be a franchise quarterback. Brought to Carolina after going 5-0 last season in relief duty - ironically enough for Brees and the Saints - Bridgewater has struggled this season. He's thrown for a career-high 3,557 yards, but has just 15 touchdown passes against nine interceptions.

His biggest issue has been an inability to deliver when it matters the most: he is 0 for 8 on potential game-winning or tying drives, has just one touchdown pass in the fourth quarter all season and is 29th in red zone QBR since Week 9, per ESPN Stats & Information. He has two touchdown passes in his last four games overall and needs a strong finale to give the team reason to keep faith in the 28-year-old signal-caller.

Sadly, we don't see that happening. The Saints are ninth in the league in fourth-quarter points allowed (5.9 per game) and have great red-zone defense on the road, allowing opponents to find paydirt on just 57.9 percent of red-zone trips.

New Orleans has not allowed a 300-yard passer all season and Bridgewater will not have star RB Christian McCaffrey – and backup Mike Davis is expected to be out as well – to help shoulder the load. I'm banking on Bridgewater and the Panthers limping into the offseason with another lackluster offensive performance. 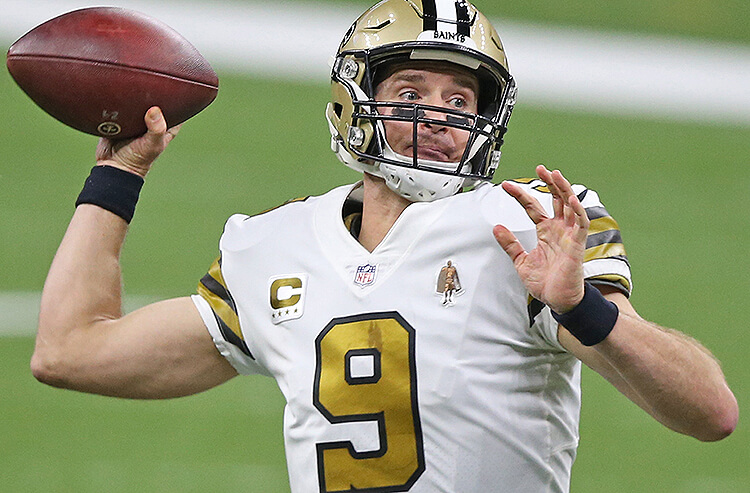 Saints vs Panthers Week 17 Picks and Predictions
Provided by

Rams vs Buccaneers Divisional Round Picks and Predictions: Gunslinger Showdown on the High Seas
Rohit Ponnaiya | Jan 23, 2022
About Us
Contact Us
Careers
Our Team
Brand
Testimonials