The San Francisco 49ers got star TE George Kittle back for last week's upset victory against Arizona, and they'll rely on him again as they try to play spoiler vs. Seattle in Week 17.

If there is an NFL team happy to say goodbye to 2020, it's the San Francisco 49ers. After losing the Super Bowl last January, the Niners were ravaged by injuries this season. And to top it off, they were kicked out of their home thanks to COVID.

Despite all that, the 49ers haven’t folded on the season. They’re coming off a 20-12 victory over the Cardinals as six-point NFL betting underdogs and they’ll look to give the NFC West champion Seattle Seahawks all they can handle in their regular-season finale.

We break down the NFL odds with our best free Seahawks vs. 49ers picks and predictions for January 3, with kickoff at 4:25 p.m. ET.

This game will be played indoors in the 49ers' home away from home at State Farm Stadium in Glendale, Arizona. Be sure to monitor the gametime conditions of other Week 17 games with our NFL weather info.

The Seahawks are 0-5 ATS in their last five road games. Find more NFL betting trends for Seahawks vs. 49ers.

While the Seahawks have already clinched the NFC West, they still have an outside shot at the first-round bye in the NFC playoffs, so they still have something to play for and are expected to suit up the majority of their starters against the 49ers.

But doesn’t that sound like something that the Niners would love to spoil? San Francisco is coming off a 20-12 win over Arizona as six-point dogs, where third-string quarterback C.J. Beathard went 13-22 for 182 yards with three touchdowns and no interceptions. And getting star tight end George Kittle back was a big reason for that.

Beathard and Kittle will get to attack a Seattle pass defense that ranks last in the NFL when it comes to passing yards allowed per game. Additionally, running back Jeff Wilson Jr. is coming off his best game as a pro, rushing for 183 yards in last week’s win over the Cards.

While the 49ers have suffered blow after blow, the defense still playing at a high level, ranking fourth against the pass and sixth against the run. But they’ll have their hands full with Russell Wilson.

The Seahawks star quarterback looked like the runaway MVP early in the season but cooled off considerably in the second half, and he had his lowest quarterback rating in the month of December. It doesn’t help that Wilson’s top two running backs, Chris Carson and Carlos Hyde, are questionable for this matchup.

Another concern with backing Seattle in this spot is that scores from other games start rolling in – not in the Seahawks favor – and they begin to let off the gas. With the Niners are well-coached by Kyle Shanahan, they’ll take advantage and keep this one close.

Despite the last meeting ending with a 37-27 scoreline in favor of the Seahawks, the total for this NFC showdown hit the board as high as 47.5 and has come down to 46.

And for good reason, primarily the fact the Seahawks have cashed the Under in seven straight games. That has happened because the offense has taken a bit of a step back and the defense has gotten to feast on some bottom feeders.

The Seahawks have scored 23 points or fewer in four of their last five games and the one game they scored more, they were playing the Jets. Meanwhile, the defense has allowed just 15 points per game over that seven-game stretch—but you can make the argument the only good offense they faced during that time was Arizona.

The 49ers, on the other hand, have averaged 23 points over their last four games and now get Kittle back in the mix. Considering these two always seem to play back-and-forth matchups resulting, in the Over going 4-0-1 in the last five meetings, we like that trend to continue.

The 49ers got Kittle involved right away last week, as Beathard targeted him five times, with Kittle catching four of them of 92 yards, and you can expect him to do what he always does and play his balls off in this one once again.

We like him to take it a step further and find the end zone in this matchup. 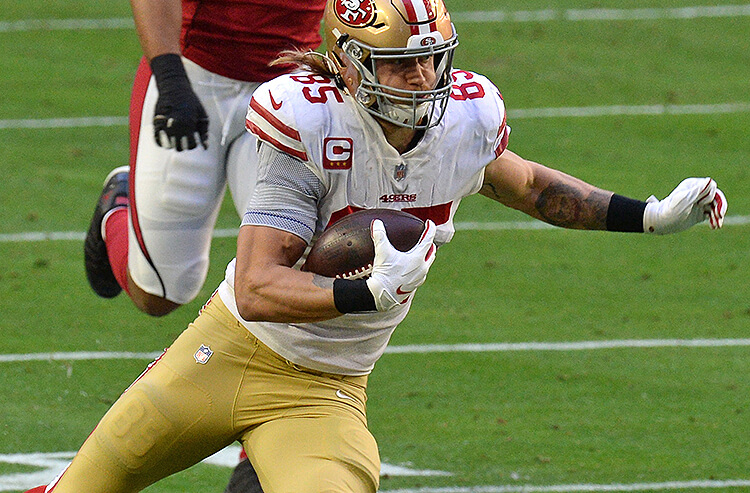 Seahawks vs 49ers Week 17 Picks and Predictions
Provided by