Aaron Rodgers has thrown for 4,059 yards with 44 touchdowns and five interceptions this season. One final big game against Chicago in Week 17 could clinch the NFL MVP Award for the Packers QB.

There will be plenty on the line when two NFC North rivals do battle on Sunday as the 12-3 Green Bay Packers visit the 8-7 Chicago Bears in Week 17 NFL action.

Green Bay has already clinched the NFC North title but can still earn the conference’s No. 1 seed with a win on Sunday or a Seattle loss. For the Bears and their playoff hopes it’s simple: win and you’re in. Matt Nagy’s club could also reach the postseason if Arizona loses to the Rams this week.

NFL betting odds have the visiting Packers as four-point favorites ahead of this important final-week matchup. With both offenses in absolute cruise control, the total has been set at 50.

Here are our NFL free picks and predictions for Packers vs. Bears on Sunday, January 3 (4:25 p.m. ET).

It will be a cold one at Soldier Field on Sunday, with temperatures expected in the low-30s at game time. There will also be a slight 7 mph wind. Be sure to monitor the gametime conditions with our NFL weather info.

The Over is 5-1 in the Bears’ last six games vs. the NFC North. Find more NFL betting trends for Packers vs. Bears.

The Chicago Bears are doing the unthinkable. After starting the season 5-1 SU, the Bears lost six straight games. But the resurgence of quarterback Mitch Trubisky has this team one win away from going to the playoffs.

Since Trubisky was reinserted under center five weeks ago, the offense has been crushing it, averaging 33 points per game and racking up three straight wins—and covers. The running game has been a major factor in the team’s success as RB David Montgomery is gaining 5.1 yards per carry over the last month and gets to face a Green Bay rush defense that ranks 21st in the league.

However, when these two teams met just five weeks ago, it was Green Bay having all the success on the ground as the Packers cruised to a 41-25 win on the back of 180-plus rushing yards. Aaron Rodgers also threw three first-half TDs and exposed a once-formidable Chicago defense that has been allowing 25.2 points per game since Week 12. Now this Chicago defense has the tough task of trying to slow down the league’s highest-scoring offense.

Green Bay proved last week how it handles bad defenses as they beat the Titans’ No. 28 DVOA defense 40-14 in primetime. If Green Bay gets ahead early as they did in their previous meeting, Chicago will be playing right into the Packers’ defensive strength as Mike Pettine’s defense boasts some of the best defensive backs in the league.

The Bears topped 30 points for the fourth straight game last week, something the franchise had not achieved since 1965. The combination of the offense’s strong play and the defense's generosity has made the Bears one of the best Over teams late in the season.

Chicago is 4-1 O/U in its last five games, averaged 57.2 total points over that stretch. Welcoming Rodgers and a Green Bay offense that has scored 30 or more points in five of its last six games has Over bettors salivating at the mouth.

Unlike last week’s frozen game at Lambeau, where the warm-weathered Titans managed just 14 points, this week’s ice-box match is between two teams that are accustomed to playing in the North in January.

Chicago has yet to see a total of 50 or higher this year but has eclipsed that number in four of its last five games, while the Packers have seen their games hit at least 50 points in seven of their last 10.

Rodgers’ push for a league MVP heads into Week 17 as the QB is the odds on favorite (-155) to win after opening at +2,200 to start the year. The Green Bay signal-caller has tossed three or more TDs in six of his last eight games as the offense has been averaging 4.1 touchdowns per game in 2020.

In his Week 12 matchup versus the Bears, Rodgers tossed four TDs on the way to a 41-25 win. Over his career, the Packers’ QB has thrown more TD passes against Chicago than any other team. The Chicago offense should keep Rodgers and the offense pushing downfield as head coach Matt LaFleur may want to give his QB a hand in capturing the award.

With the league’s MVP on the line, we are expecting a big game out of the well-insured quarterback. 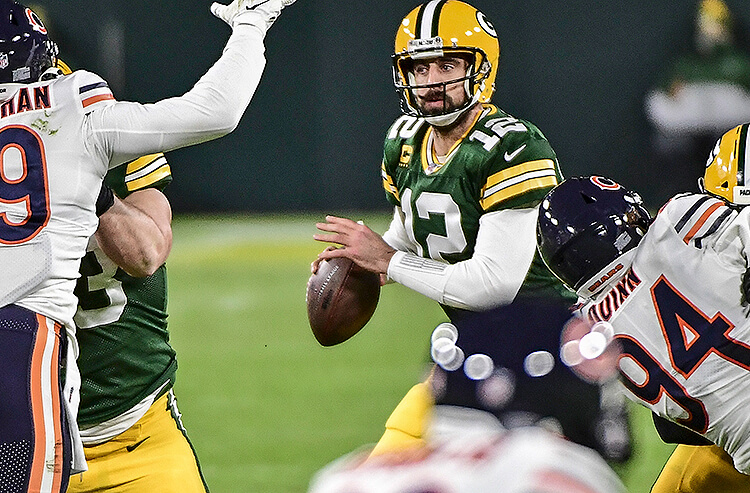 Packers vs Bears Week 17 Picks and Predictions
Provided by

Teams to Watch and Trends to Follow for NFL Conference Championships Betting
Adam Chernoff | Jan 24, 2022
About Us
Contact Us
Careers
Our Team
Brand
Testimonials