The Bengals and Vikings aren't without question marks entering 2021 but both teams have reasons for optimism on offense. Find out how returning players and talented offenses will impact NFL betting in Cincinnati with our picks.

Two teams facing crossroads in 2021 will square off to begin the NFL betting season, with the Minnesota Vikings heading to Ohio to face the Cincinnati Bengals.

Embattled head coach Mike Zimmer and Minnesota have seemingly been reaching the end of their current cycle for several years now, but with a win total Over/Under of 9, oddsmakers expect them to be in the playoff picture yet again. Third-year head coach Zac Taylor and Cincinnati, meanwhile, will try to finally get a long-needed rebuild off the ground.

Read on for our free Vikings vs. Bengals picks and predictions, with kickoff set for September 12.

This game hit the board at -3 when the NFL schedule was released and has remained unchanged throughout the offseason and preseason, as it remains at -3 as of Thursday afternoon. After the total opened at 48 in May, it fluctuated between 47.5 and 48 but has since settled at 47.5, which is where it sits on Thursday. Be sure to check out the full NFL odds before placing your bets, and also view the full line movement for this game.

The Over is 4-1 in the Vikings' last five games as a favorite. Find more NFL betting trends for Vikings vs. Bengals.

Utter capitulation down the stretch from Zimmer's Vikings defense in 2020, which ended the season 26th in weighted DVOA, saw them finish on a seven-game losing streak against the spread, as their 6-10 ATS record was better than just the Cowboys' 5-11 mark. With an offense that can consistently achieve the "solid is enough" barometer set for it, the defense has to rebound in order for Minnesota to improve in 2021, whether it's SU or ATS.

To improve, the Vikes' bets in the secondary must pay off, with Patrick Peterson, Breshaud Breeland and Xavier Woods joining a group headlined by Harrison Smith. Zimmer's experience coaching the secondary led to Anthony Harris emerging as a high-level safety and helped Terence Newman play to age-39, so squeezing productivity out of P2 and Woods isn't unrealistic. Just as important, however, is that they'll enter the season healthy. Danielle Hunter, among the league's best 4-3 ends, is back after a lost season, while Anthony Barr and Eric Kendricks will be reunited as possibly the best linebacker duo in the game (though Barr has been ruled out for Week 1).

While Minnesota gets healthy on defense, the Bengals will welcome back their offensive stars as Joe Burrow and Joe Mixon return from long-term injuries, joining a talented unit with slot-stud Tyler Boyd and certified ball-winner Tee Higgins on the outside. Provided the Bengals can keep Burrow clean — hardly a foregone conclusion — they should roll out a solid offense.

On defense, there's further reason for optimism up front and on the back-end. Though Cincinnati's defensive line lacks a true No. 1 pass rusher, underlying numbers are kind to both ends in Trey Hendrickson and Sam Hubbard, while Larry Ogunjobi looked, at times, to be among the league's best 3-techs in Cleveland. DJ Reader won't factor in against the pass, but as a run defender, you're hard-pressed to find a better, more stout nose tackle.

Though the Bengals aren't without question marks in the secondary, between Mike Hilton, Jessie Bates, and Vonn Bell, they have three above-average starters in sub-packages that will feature in the majority of snaps. Bates, in particular, will make everyone better as one of the league's true centerfielders with phenomenal range.

Ultimately, the Bengals can approach 7-win territory this season, as long as Burrow is healthy and progresses as he was prior to injury. We can at least lock in health for Week 1, and that moves the needle for us. In Year 1 for Taylor, 2019, they lost by a single point to the Seahawks to begin the year. In 2020, a missed 31-yard field goal at the end of regulation caused them to lose to the Chargers 16-13. It may be a third straight year of tough losses to open the season, but Cincinnati will do enough to cover at home.

Buoyed by an elite running game, one of the best schematic minds in recent football history, and a fantastic rookie season from Justin Jefferson, the Vikings finished the 2020 season eighth in offensive DVOA — their second-straight Top 10 finish in Football Outsiders' metric. Above-average efficiency should once again be achievable for this offense, too.

While Gary Kubiak is gone and the offensive line has multiple question marks entering the season, the scheme should remain the same as Kubiak's son takes over the play-calling. The outside zone, play-action heavy scheme is offensive line-friendly and will help to mitigate weak spots up front. Dalvin Cook and Jefferson are elite playmakers and will help to carry the prime meridian of NFL quarterbacks, Kirk Cousins. The Vikes' formula on offense, despite being run-heavy, was enough for them to finish 11-5 O/U a year ago, and without major upgrades to a defense that bottomed out (aside from the return of Hunter), it's difficult to see that changing drastically.

For the Bengals' part, it's difficult to gauge anything from looking at their season-long marks in 2020, with Burrow and Mixon combining to play 16 games. Burrow's 10-game sample size can provide some optimism, however, as he shed a slow start and began to resemble the tremendously accurate passer he was at LSU. Over a four-week stretch prior to his season-ending injury, Cincinnati had averaged the second-most points per drive in the NFL.

Burrow's accuracy and his talented surrounding pieces will be for not if the Bengals' offensive line can't hold up, however, after Burrow was sacked 3.2 times per game behind a line that finished 24th in adjusted sack rate. In a season-long outlook, that's a reason for concern. In the short-term, however, the Bengals should be able to move the ball against a Minnesota defense strong at the second level but weak everywhere else. Zimmer's affinity for blitzing the A-gaps could be effective but without a secondary or tertiary pass rusher, it doesn't move the needle enough. Take the Over on the Ohio River.

Much was made of the Bengals' decision to overlook a talent-needy offensive line when they selected Ja'Marr Chase with the fifth overall pick in the 2021 NFL Draft, reuniting the former LSU Tiger wide receiver with his college quarterback, Joe Burrow.

The noise surrounding that decision has only increased as training camp reports around Chase's play were discouraging, as he struggled to separate — his single best trait as a college receiver — and preseason saw him catch one of five targets, dropping the other four despite dropping fewer than five percent of college targets. Chase didn't help himself, saying Thursday the NFL football was partially to blame for his August drops.

Chase's poor leadup to his first NFL season would have us expecting a slow start, but even more so in a Bengals offense where he is a luxury, with Tee Higgins and Tyler Boyd both bona fide starters at wideout. There's still a path for Chase to play the majority of snaps on offense, as Boyd will slide inside in three-receiver sets, but there is no reason to expect Chase to explode onto the scene in his first career game. Take the Under on his receiving yards prop. 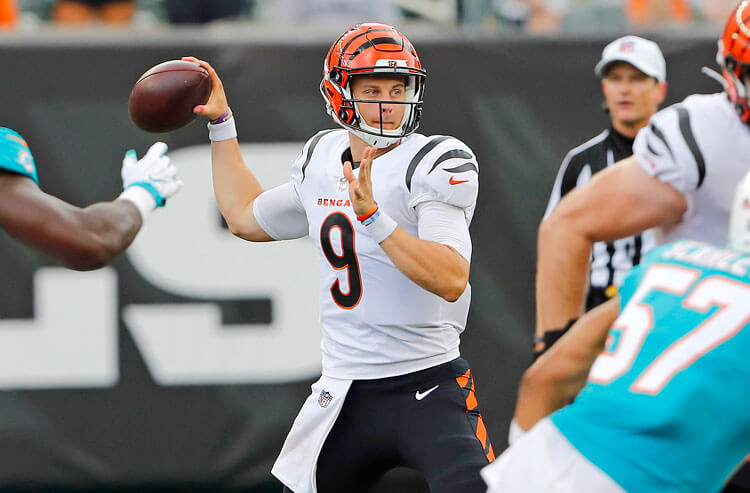 Vikings vs Bengals Week 1 Picks and Predictions: Question Marks in Cincinnati Aren't on Offense
Provided by