In one of the most lopsided NFL betting games of the year, the perfect 9-0 Pittsburgh Steelers travel to sunny Florida to take on the 1-8 Jacksonville Jaguars as 10-point favorites.

It may be talent assessment time for the Jags but for the Steelers, every game is important in the AFC with the 8-1 Kansas City Chiefs hot on their heels.

NFL odds have the Jaguars opening as a TD-plus underdog for the fourth straight week but they have covered two straight games. The total opened at 46 but has since traveled north to 47.5.

Here are our NFL free picks and predictions for Steelers vs. Jaguars on November 22 (1:00 p.m. ET).

Mid-70 temperatures and cloudy skies will fill TIAA Bank Field on Sunday. A light 7 mph wind will be present. Be sure to monitor the gametime conditions with our NFL weather info.

The Jaguars are 4-1 O/U in their last five games as a home underdog. Find more NFL betting trends for Steelers vs. Jaguars.

The Jaguars have covered their last two games, thanks in part to success in the running game. Jacksonville didn't have to abandon the run against Houston or Green Bay because the Jags kept things relatively close throughout the game. Pittsburgh has been surprisingly terrible at stopping the run over the last three weeks, as no team is giving up more rushing yards per game over that stretch than the Steelers' 189.

Pittsburgh at -10 is a little telling, considering the Jags were 14-point road underdogs in poor weather conditions in Green Bay—a game they covered.

The Steelers are 7-2 ATS this year but those two losses came as TD-or-more favorites and against teams that are a combined 5-13 SU this year.

With the Ravens on deck for the Steelers in Week 12, this game could be a look-ahead spot for them as well. We would obviously feel more comfortable if this game came off the 10 and may wait to see if it does, but we’re taking the Jags and the points.

As mentioned above, Jacksonville's strength is the Steelers’ current weakness. Pittsburgh has gone from one of the best run stoppers to allowing a league-worst 5.5 yards per carry over its last three games. Jacksonville leaning on RB James Robinson is a better path for the Over than relying on QB Jake Luton to air it out.

Speaking of leaky Ds, the Jaguars rank 31st in yards per play allowed at 6.3, which is only better than the Atlanta Falcons. From Weeks 2 to 7, Jacksonville allowed each of its six opponents to score at least 30 points.

The Pittsburgh offense hasn’t been the driver behind its 9-0 season to date, as both the rush and passing game sit in the bottom half of the league in yards. But this is still a team that has been held to under 26 points just once this year and has put up nearly 30 points per game over its last three.

The total of 47.5 equals that of last week’s game in Lambeau that had 20 mph winds. The weather is looking good at TIAA Bank Field for Sunday and at 47.5, we’re taking the Over.

With RB Chris Thompson hitting the IR and the only other relatively healthy back being undrafted Devine Ozigbo, Robinson could be in for even more work than usual on Sunday. He has been a workhorse for the one-win Jags, but hadn’t gotten much use in the passing game thanks to the presence of Thompson.

Thompson has averaged nearly 20 yards per game through the air this year and was good for three-to-five targets a game. One would think with Ozigbo’s absence from Week 1 to 6 due to injury and seeing zero touches last week, Robinson could be seeing the extra passing plays in the void of Thompson.

The Steelers have also been getting gashed on the ground over the last three weeks and are giving up a league-worst 182 yards per game over that stretch. Robinson has averaged more than 20 rushes a game since Week 7 and has averaged more than 100 rushing yards. He will get his carries regardless, but playing his Over total yards helps us if the Jags trail early and have to play catch-up. 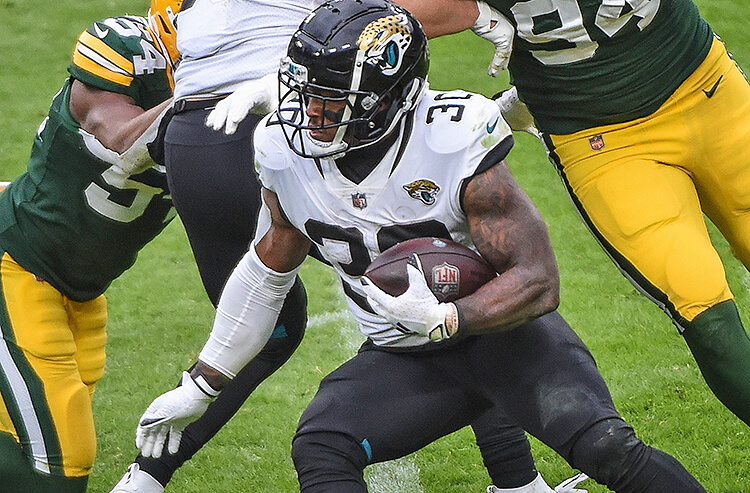 Steelers vs Jaguars Week 11 picks and predictions
Provided by