The Browns have a number of potential injuries — including at QB — but they still have a run game and a strong defense, which is enough for us to like them at home against the also-banged-up Steelers this Sunday. See more in our NFL picks and predictions.

The last time the Pittsburgh Steelers faced off against the Cleveland Browns, Pittsburgh shot itself in the foot (multiple times) en route to an upset home loss in last year's AFC Divisional Round.

The Steelers' first chance at revenge comes this year in Week 8 when they visit Cleveland as NFL betting underdogs. Both teams are dealing with a litany of injuries, so "who" takes the field on Sunday afternoon is just as important as "what" each team's plan of attack is.

Here are our best free NFL picks and predictions for Steelers vs. Browns on Sunday, October 31, with kickoff at 1:00 p.m. ET.

The line opened with the home Browns as a flat 3-point favorite, but the spread has since shifted to -3.5 at the time of writing. The total has also seen some slight movement, dropping from the opening number of 43.5 to the current 42.5. Use the live odds widget above to track any future line movements right up until kickoff and be sure to check out the full NFL odds before placing your bets.

The Under is 6-2 in the last eight head-to-head meetings in Cleveland. Find more NFL betting trends for Steelers vs. Browns.

The latest chapter in this heated rivalry features a future Hall-of-Fame quarterback — who's a shell of his former self — against, well, we don't know who will be starting under center for Cleveland on Sunday.

Browns' No. 1 QB Baker Mayfield has struggled the past few weeks while dealing with both a torn labrum AND a fracture in his non-throwing shoulder. He sat out last week's win over Denver, as backup Case Keenum got the start and was more than adequate, throwing for 199 yards, one touchdown and (most importantly) zero turnovers.

What we do know for the Browns is that, regardless of who is starting at QB, they will have a devastating run game to rely on and carry the offensive load. Powered by third-stringer D'Ernest Johnson, Cleveland rumbled for 182 yards on the ground last week — and will have its star running — Nick Chubb —  back on the field this Sunday against the Steelers.

While Cleveland's No. 1 rushing attack will be there to support its unreliable passing game, Pittsburgh's ground game is, well, not quite as terrifying. The Steelers are 29th in the league with 81.2 rushing yards per game, providing absolutely zero help to a Pittsburgh aerial attack that is 20th in passing DVOA (per Football Outsiders), as Ben Roethlisberger is 15th in passing yards per game, has just seven touchdowns against four interceptions, and the Steelers offensive line is 30th in pass-block win rate — and the once-mobile Roethlisberger has seen his scrambling ability all but evaporate.

Defensively, the Steelers are in the middle of the pack, but a number of defensive line injuries have weakened their run defense, as they've given up 127 yards per game on the ground over their last three contests, including over 5.3 ypc in each of the last two contests — not ideal for facing a Cleveland team that runs over anyone AND is getting back star OT Jack Conklin.

On the flip side, the Browns have had some issues in coverage, but they are second in the NFL in pass-rush win rate. Putting pressure on Big Ben, who can no longer scramble and extend plays, will protect Cleveland from seemingly weekly coverage gaffes. And while the Steelers are terrible at running, for extra measure, the Browns are also giving up the second-fewest rushing yards per game.

The Browns have a big edge offensively (being able to run), they match up well to shut down Pittsburgh's 27th-ranked offense, and they're at home — we'd love this a lot more if it slipped back to -3 but we have no problem backing the Browns with the half-point hook.

Remember above? Where we said that neither team is going to generate much in the passing game? Yeah, that generally doesn't translate into many points being scored.

Remember above? Where we said that the Browns are going to run all game long? And then factor in that Pittsburgh will have to run, regardless of how futile it may be, just to protect the old and immobile Roethlisberger? Yeah, that generally doesn't translate into many points being scored.

The Under is 5-1 in Pittsburgh games this season, while the Browns have failed to top 17 points in three of their last four games. In what is close to a must-win for both clubs, we're expecting a hard-nosed, grind-it-out war of attrition on Sunday.

And yeah, that generally doesn't translate into many points being scored.

Cleveland isn't exactly the best first-quarter scoring team, sitting just 15th in the league in 1Q ppg, but Pittsburgh is in 30th in that mark are 2.3 points per game in the first 15 minutes.

The Browns are an ugly 2-4-1 in the first quarter this season, but the Steelers aren't much better, going 2-3-1 in the first period — including being shut out in four of those six games.

Considering it's a huge divisional game at home, we're going to bank on Cleveland coming out fired up and grab a lead — even if it's 3-0 — after the first 15 minutes against an offense that has been generally slow to get going each week. 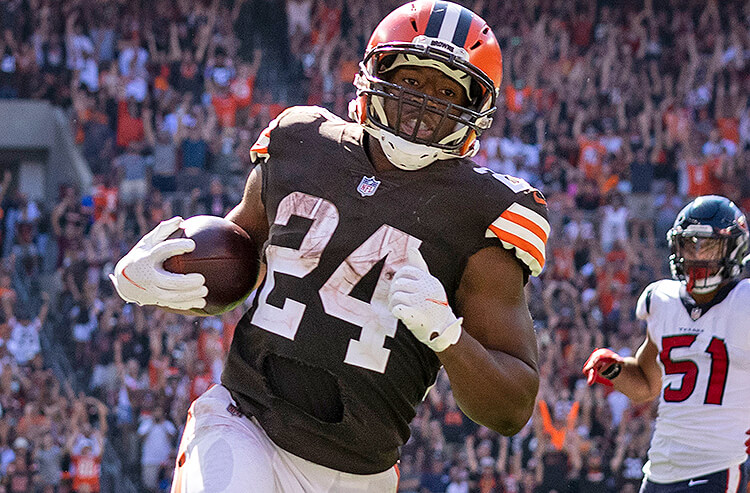 Steelers vs Browns Week 8 Picks and Predictions: Cleveland Grinds Down Pittsburgh in Divisional Showdown
Provided by