NFL betting lines have swung back and forth in Indy this week but now the AFC South-leading Titans head to face the Colts as the underdog. Our picks and predictions look at whether that status in Week 8 is justified.

The AFC South's two competitive teams will wrap up their season series on Sunday at Lucas Oil Stadium, as the division-leading Tennessee Titans visit the Indianapolis Colts.

Tennessee has effectively shaken off early-season struggles and, with two consecutive impressive wins in its pocket, takes a 5-2 record on the road against a feisty 3-4 Indy team.

Here are our free NFL betting picks and predictions for Titans vs. Colts on October 31.

This game opened at Colts -2.5 before action on the Titans moved it to a pick'em, then to Tennessee -1, before shifting back toward the home side, where it's now Colts -1.5. The total hit the board at 49 on Monday morning and after a brief dip to 48, was slowly bet up to 51, where it sits as of Thursday evening.

The road team is 5-1 ATS in the last six meetings between the AFC South's Titans and Colts. Find more NFL betting trends for Titans vs. Colts.

The public's backing of the Colts in Week 8, which swung Indianapolis to favorite status, is quite curious. Both teams carry good form into this game and it's the Colts with home-field advantage, sure, but further context is needed.

The Titans not only resurrected their season and this currently constructed core's window, but they have done so with some fine performances. A bizarre overtime loss to the Jets is a stain, but Tennessee has won five of six with four impressive wins in there (apologies to the Jags). There was a hard-fought comeback against a not-yet-broken Seahawks team in Seattle, a wire-to-wire win over these same Colts, and then banner victories over the Bills and Chiefs.

The Colts, on the other hand, have wins against the Dolphins, Texans, and 49ers sandwiched around their infamous collapse against the Ravens. Indy's secondary is broken and its defensive line has been a major disappointment, but a blossoming offense should keep it competitive for the remainder of the season. However, to look at both these teams' full seasons and recent play, and come away saying the Colts should be favored here, seems misguided.

The Titans are superior on offense and are better at defending the pass — with an improving pass rush led by a breakout star in Harold Landry. Tennessee is a more efficient attack in terms of both yards and points per drive, while the pair's defenses are closely ranked in the same metrics.

There may not be a lot separating the two teams but the Titans have the edge where it matters most, in terms of QB play, offensive efficiency, and stopping their opponent's passing game.

After playing to a total of 41 in September, the Titans and Colts are looking at a total of 51 for their Week 8 meeting. Both teams have changed considerably since then and are improved on offense, with the health of Carson Wentz's ankles and Tennessee's two alpha wideouts both huge aiding the Over.

Really, though, even with both teams' evolutions aside, the case for the Over here is pretty concrete. We're in a dome with controlled conditions, and we have two good offenses facing off against defenses in the bottom half of the league in pass defense DVOA.

The Titans' offense is rolling after early-season concerns, as they rank 13th in weighted DVOA, sixth in yards per drive, and seventh in points per drive. AJ Brown is getting healthier every week, and the offensive line is improving. While they have the fourth-highest adjusted sack rate, they've surrendered just seven QB hits and one sack over the last two weeks.

Indianapolis, meanwhile, is just behind Tennessee in weighted DVOA, as the 15th ranked offense. The Colts are up to 11th in yards per drive and 14th in points per drive, as Wentz's comfort grows with every week while Indy relies on its two best playmakers, Michael Pittman Jr. and Jonathan Taylor, more and more.

The pace is a concern, with both teams ranking in the bottom-10 in the league in time per play in neutral situations, but the big-play ability on both sides mitigates that worry considerably, as both are in the top half of the league in explosive play rate. With consistency and fireworks coming from both offenses, this one is going Over.

When these two met in late September, Taylor was still being contained a bit by his own coaching staff as he took a season-low 10 carries and ended with just 11 touches, also a season-low, while playing fewer than half of the offense's snaps. His dynamism was still on full display in that game, however, as he averaged 6.5 yards per touch.

Taylor has since been, relative to his typical usage, unleashed in recent weeks. Week 7 saw Taylor take a season-high 18 handoffs, with his 21 touches the most since Week 1, while playing his highest percentage of snaps on the year. Over the last month, Taylor is averaging 138 scrimmage yards and only broke the 20-touch plateau for the second time this year last week.

Against a Titans defense that ranks 25th in rushing defense DVOA and has allowed an average of 32.7 receiving yards to tailbacks this year, count on Taylor to continue to be prolific. 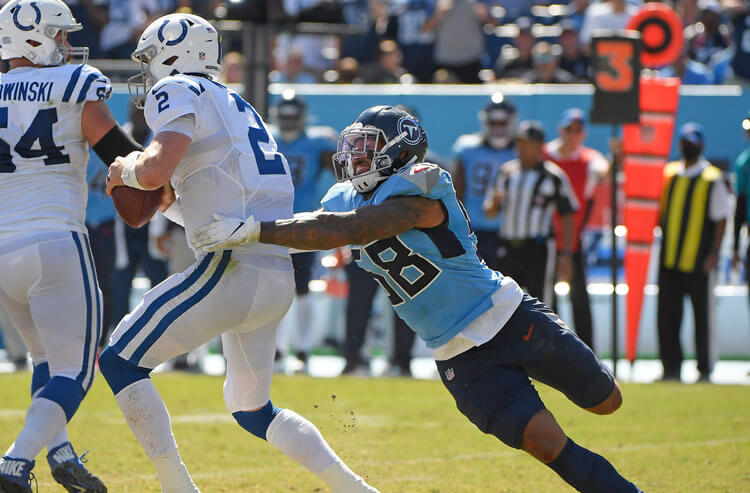