Dolphins vs Bills Week 8 Picks and Predictions: Buffalo Charges Out of Bye Week

The Dolphins may be better than their record but the Bills will serve up a reminder that they're the class of the AFC East Sunday. Our NFL betting picks look at whether Miami can keep it within two scores in Orchard Park.

The Bills come into this game fresh off a bye week, during which their lead in the AFC East lessened after a Patriots win. They’ve scored more and given up fewer points than every other team in the AFC and face a Dolphins team on a six-game losing streak.

With the Dolphins sitting on a 1-6 record and now facing arguably the best team in the conference, is there any hope for Brian Flores and Tua Tagovailoa? Get ready for the big game by reading our NFL picks and predictions for the Miami Dolphins vs. Buffalo Bills.

We’re yet to see any movement on the lines for this game. The total points opened at 49.5 points and remains the same, with the Bills holding firm as 13.5-point favorites too. Use the live odds widget above to track any future line movements right up until kickoff and be sure to check out the full NFL odds before placing your bets.

The Bills are 5-0 ATS against a team with a losing record. Find more NFL betting trends for Dolphins vs. Bills.

Week 1 feels like a very long time ago. It’s always argued you should never have any major reactions after the first game in the NFL season, and that’s certainly correct with these two teams. After Week 1, it was the Dolphins who were 1-0 after beating the Patriots while the Bills were 0-1 after a low-scoring loss to the Steelers. Questions were being asked of the Bills and of Josh Allen, and many thought that maybe Tagovailoa was the guy for the Dolphins.

Fast forward six weeks and the Bills are arguably the most dangerous team in the AFC, if not the entire league, and the Dolphins are directionless, on a six-game losing streak and Tua’s future with the franchise looks in trouble.

These two teams met in Week 2 of the season, in a game that set the course on both teams’ seasons. The Bills won 35-0, which showcased their ability to carve teams open on offense and also highlighted their improved defense. The Dolphins, too, gave us a look at their future without Tua under center, albeit because of injury.

Miami is undoubtedly in a bad place right now. Only the Lions are on a longer losing streak and the speculation around a potential trade for Deshaun Watson is getting louder and louder. Despite that, this team is probably slightly better than its record. It has had some embarrassing losses but three of its games have been lost by three or fewer points, flip those results and a 4-3 record wouldn’t be horrific. These are the fine margins that exist in the NFL and I’d hope that Brian Flores wasn’t under threat of losing his job until the end of the season at least, given what he has achieved in the role so far.

As 13.5-point favorites, the Bills have a big number to cover but given the result last time, it’s hard to look beyond them covering, despite the size of that number. The team is 10th in the league in offensive DVOA but crucially they are number one in defensive DVOA.

I see this game unfolding much like the last. Josh Allen will struggle in the air, as he did last time, going just 17 for 33 and 179 yards, but that the Bills’ ground game will help them run over the Dolphins. Don’t try and be smart with this one, just grab the Bills -13.5 as soon as you can.

It makes sense that our first port of call, when picking which side of the points total to be on, is the last meeting between these two teams. The Bills put up 35 points and the Dolphins earned a goose egg.

The Dolphins have scored 48 points in their past two games but it’s crucial that you consider the opposition. Both the Jaguars and Falcons sit in the bottom three in the league in defensive DVOA, alongside the Chiefs. Don’t be expecting them to put up similar numbers against a defense that has allowed an average of just 270.2 yards of offense per game. The Bills have allowed an average of 16.9 points per game but this has included the likes of the Titans and Chiefs, teams with the potential for explosive scoring.

Last, but not least, we look at the trends. The Under is 5-1 in the Bills past six home games against teams with a losing record.

One of the things that makes Josh Allen so dangerous is his ability with his feet. He’s quick and agile, and arguably the Bills’ best rusher. We may have seen Zack Moss breakout, as some have described it, but he’s not taken over all of the teams rushing by any stretch of the imagination and Allen continues to be dangerous.

In the Week 2 meeting between these teams, we saw Allen rush for 35 yards on five attempts. This season, in total, he’s already rushed for 214 yards through six games, scoring just two touchdowns. In his 19 games last year, we saw 566 rushing yards and nine touchdowns.

His average per game this year is 35.6 rushing yards, up from last year’s 29.7 rushing yards per game. However, he’s behind on touchdowns, scoring a touchdown in 47 percent of his games last year compared with 33.3 percent this year. You’d expect positive regression to come soon, so it’s worth backing Josh Allen to find the end zone here. 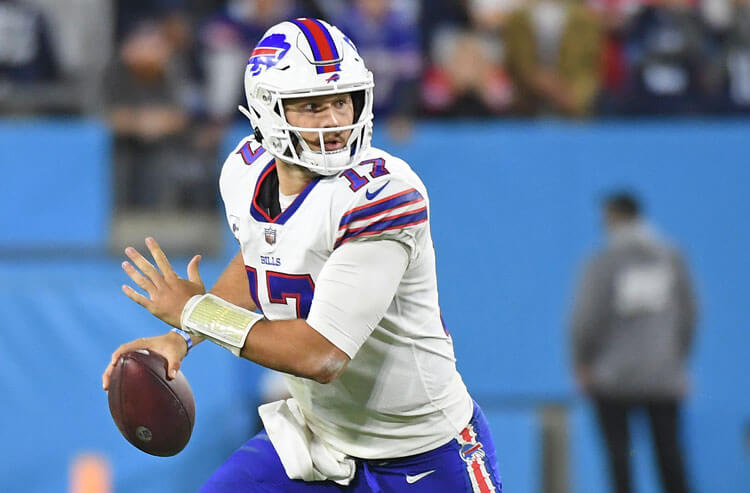 Dolphins vs Bills Week 8 Picks and Predictions: Buffalo Charges Out of Bye Week
Provided by