Bengals vs Jets Week 8 Picks and Predictions: Gang Green in for a Tough Landing

The Bengals and Jets have shared similarities for years but in 2021, Cincinnati is proving to be the real deal while New York suffers through another lost season. A 10.5-point spread doesn't do either team justice — find out more with our picks.

It's a moment we've all experienced. You meet up with an old friend a few years after graduation, only to realize that while you have your life fairly put together, they are yet to grow up. That's the situation we have in the Meadowlands on Sunday, as two perennial poster boys for NFL dysfunction meet, with one of the two having finally grown up.

The 5-2, AFC-leading Cincinnati Bengals visit the 1-5 New York Jets who, despite hitting the reset button, appear more adrift than ever. NFL betting lines have Cincinnati as a 10.5-point favorite but is that still giving New York too much credit?

Find out with our best free picks and predictions for Bengals vs. Jets.

After opening at Bengals -9.5 on Monday, the spread has surprisingly only been bet to -10.5, though action still favors Cincinnati. The total hit the board at 44 and action on the Under saw it drop as low as 42 before settling at 43 as of Friday afternoon.

The Jets are 1-6 ATS in their last seven games. Find more NFL betting trends for Bengals vs. Jets.

It's still early in the season so perhaps skepticism is warranted, but to see the Bengals only favored by 10.5 points against the Mike White-led Jets seems disrespectful to the AFC leaders. Cincinnati has previously beaten the Steelers by 14 and the Ravens by 24, as well as a more accurate measuring stick for these Jets, the Lions, by 23. The Bengals haven't shown a tendency to play down to their opponents and they have shown the ability to win by multiple scores. As such, this pick seems like a no-brainer.

Looking deeper, you have a Top 5 defense by DVOA in Cincinnati going against a Jets offense that, by almost any metric, sits in the bottom two in the NFL — and now must look to their backup quarterback. The Bengals' pass rush, 12th in adjusted sack rate and bookended by two quality rushers in Sam Hubbard and Trey Hendrickson, will be teeing off on White and a Gang Green offensive line that sits third in adjusted sack rate. When New York has the ball, it'll be ugly, and it'll be short-lived.

On the flip side, a Bengals offense that has successfully married efficiency and explosiveness will get a New York defense that can't get off the field, can't hold teams in the red zone, and can't stop big plays. The Jets allow the seventh-most yards and points per drive in the NFL, and allow explosive passing plays at the fourth-highest rate in the NFL.

Whether the Bengals are methodically marching down the field on New York, or quick-striking with a big play, Cincinnati's offense will be a hot knife through the butter that is the Jets' defense.

Garbage time would be our only concern here, as nearly half of New York's points in 2021 have come in the fourth quarter (34 of 80). However, that number's partially skewed by the Jets' 14-point fourth in their win over the Titans, which included a 53-yard backyard football touchdown from Zach Wilson to Corey Davis. And, frankly, that concern would also require even a tiny bit of faith in White's ability to lead multiple scoring drives against a high-level defense within a quarter. I don't hold any faith in that possibility, and I don't hold any reservations about taking the Bengals to cover.

It's a low total in East Rutherford on Sunday but still not low enough. The Bengals' offense is legit, absolutely. They are efficient through the air, as they rank 16th in passing DVOA. They score at a high rate,  currently ranking 12th in the league in points per drive. And, Ja'Marr Chase's transcendent talent and long-established connection with Joe Burrow has given them an elite explosive element, with Cincinnati sitting second in the league in explosive pass rate.

It isn't a matter of if the Bengals will hit on a big play, but when — and how many times.

However, we'd need several games' worth of big plays from Burrow and Chase to take the Over here, because betting on the Jets' offense this week is a fool's errand. Even their team total of 15.5 seems generous, with White under center.

New York enters the week 32nd in total points and points per drive, 31st in total yards and yards per drive, and 31st in season-long, weighted, and passing DVOA on offense. During White's relief appearance last week, the Jets averaged less than a point per drive and just 28.6 yards per drive, a figure helped by a 77-yard march that was extended thanks to a pass interference penalty.

The Bengals' defense is vastly superior to the Patriots unit White faced last week, and they will have spent the week preparing for him whereas New England didn't. It'll be a miracle if the Jets hit double-digits on Sunday.

The Joe Mixon experience has remained largely the same in 2021, as tantalizing glimpses of an All-Pro caliber runner are sullied by stretches of maddening inefficiency. After a brief injury scare, Mixon had his best game of the season in Week 6 against the Lions, running for 94 yards on 18 carries and adding another 59 yards on five catches. Against a similarly lost defense, Mixon can post another banner day.

The Jets have been terrible against the run in 2021, as they enter Week 8 sitting 27th in the league in rushing defense DVOA. Worsening matters is that all three of New York's linebackers, C.J. Mosley, Jarrad Davis, and Quincy Williams, remained on the injury report this week despite hopes of good health. Cincinnati will take whatever it wants on the ground, with the biggest obstacle in Mixon's way being Zac Taylor's bizarre insistence on keeping Samaje Perine involved in the backfield.

Even still, Mixon should get plenty of opportunities here, with the Bengals likely to be draining the clock throughout the second half. New York's allowed over 100 yards on the ground in every game this season and it'll continue in Week 8, with Mixon accounting for more than 70 of that. 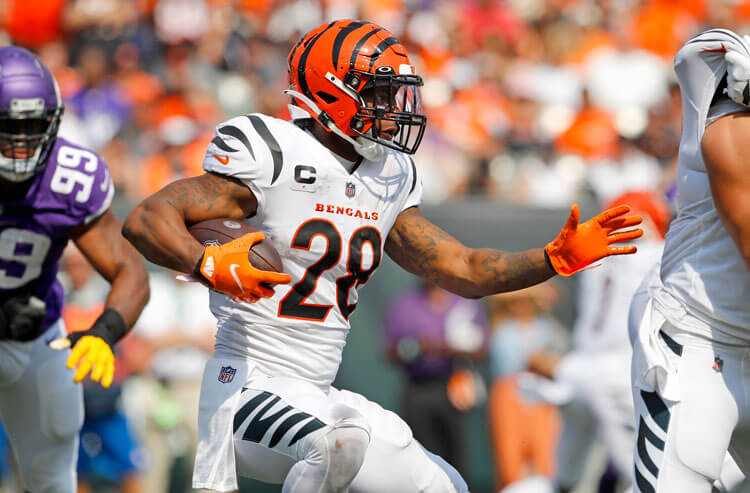 Bengals vs Jets Week 8 Picks and Predictions: Gang Green in for a Tough Landing
Provided by