Cleveland has given us the full Browns experience the past three weeks, but after getting blown out by the Patriots, there's no better way to heal wounds than by a date with the winless Lions. We break it all down in our Lions vs. Browns Week 11 picks.

The Detroit Lions enter Week 11 still looking for their first win of the NFL season and head to FirstEnergy Stadium to face off against the Cleveland Browns.

Oddsmakers aren't expecting the Lions to get that victory this week with NFL betting lines installing them as 11.5-point road underdogs with the Over/Under at 43.5.

Here are our best free Lions vs. Browns picks and predictions for Sunday, November 21, with kickoff at 1 p.m. ET.

This line opened with the Browns installed as 10-point favorites with the Over/Under at 44.5. Early money came in on Cleveland and the Under, shifting the line to Browns -11.5 with the total at 43.5. Use the live odds widget above to track any future line movements right up until kickoff and be sure to check out the full NFL odds before placing your bets.

Lions vs Browns picks and predictions

Will the real Cleveland Browns please stand up? The last three games have been typical of the Browns roller-coaster season with Cleveland losing a close one to the Steelers, hammering the Bengals by 25 points, and then getting destroyed 45-7 by the Patriots last week. With only seven weeks left in the regular season, we still don't really know who this .500 Browns team is.

We know exactly who the Lions are. One of the worst teams in the NFL on both sides of the ball as they sit 29th in the league in DVOA defense and 31st in DVOA offense, according to Football Outsiders.

Detroit is still looking for its first win of the season after settling for a tie against the Ben Roethlisberger-less Steelers in Week 10. While that draw snapped an eight-game losing streak to start the year, the Lions have gone a respectable 5-4 ATS. That said, they've alternated ATS wins and losses to create an interesting trend: they tend to play an opponent close (such as the Ravens, Vikings, and Rams) and then get annihilated the following week.

Browns quarterback Baker Mayfield has been the poster boy for Cleveland's inconsistency but is expected to suit up on Sunday despite taking a knock to his knee last week. Thankfully for Browns fans, their offense is built around a dominant ground game which is tied for the league lead with 154.1 rushing yards per game.

Pro Bowl running back Nick Chubb was just activated from the COVID-19 list and should be good to go. He leads the NFL with 6.0 yards per carry and is averaging 103 yards per game on the ground. Expect him to shred a Lions defense that allows 135.7 rushing yards per game. Look for the Browns to run all over a deflated Lions team and cover this number.

The Lions could be without starting QB Jared Goff who sat out Wednesday's practice with an oblique strain. With Goff ranking last in the league in QBR (27.3) and average completed air yards (3.6), you might think that Detroit couldn't get any worse under center.

Not with Tim Boyle next in line at the position. Boyle has just four career passes at the NFL level and the 27-year-old wasn't even good in college, throwing for 12 touchdowns and 26 interceptions in four years with UConn and Eastern Kentucky.

Regardless of who is throwing the ball for the Lions, they won't be able (or even willing) to attack downfield. The Lions have rarely even been throwing the ball past the first-down marker, often settling for underneath throws due to having one of the least impressive groups of wideouts in recent history.

Mayfield hasn't been much better for the Browns, ranking 25th in the league in QBR (42.9) and the Browns are starting to look really thin at receiver. Getting rid of disgruntled WR Odell Beckham Jr. might have been necessary but now Jarvis Landry, Donovan Peoples-Jones, Anthony Schwartz are all questionable with injuries.

The Browns are already one of the league's most run-heavy teams and could lean even more on their ground game with their banged-up receiver corps. Expect a similar game-plan from the Lions who ran the ball 39 times last week and attempted just 25 passes.

With the Under going 6-1 in the Lions' last seven games and also cashing in five of the Browns' previous six contests against teams with a losing record, expect this game to go below the total.

It has to be an extremely depressing feeling to let close games slip away when you're as devoid of talent as Detroit is. And this year whenever that's happened, the Lions have always come out extremely flat in their next contest.

They lost on a last-second record-breaking field goal to the Ravens in Week 3 and fell behind 21-0 to the Bears the following week. They again fell on a last-second FG to the Vikes in Week 5 and then let the Bengals jump out to a 27-0 lead in Week 6. In Week 7 they squandered a second-half lead against the Rams and then allowed the Eagles to score 41 unanswered points in their next game.

This is a Lions team that scores the second-fewest first-half points per game (6.6) and allows the second-most first half ppg (15.1). Expect another rough start from Detroit and back Cleveland on the first-half spread. 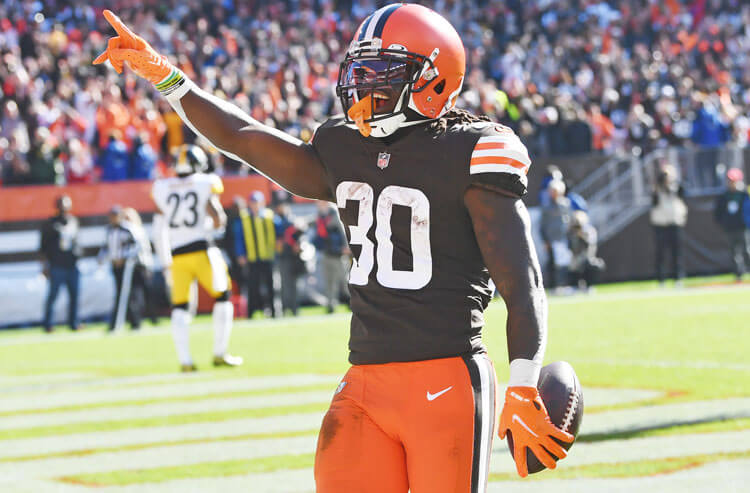