Eagles vs Lions Week 8 Picks and Predictions: Are The Eagles Packing It In?

The Lions play host to the Eagles in Week 8, with another opportunity for them to get into the win column. Detroit has shown no quit thus far and that might just be enough to cover against Philly. Check out the best plays in our Eagles vs. Lions picks.

The Detroit Lions are 0-7 in the standings but far from winless in the hearts of NFL bettors, with a 4-3 mark against the spread heading into Week 8’s home date with the floundering Philadelphia Eagles.

The Lions are coming off an emotional loss to the Los Angeles Rams and former franchise QB Matt Stafford last Sunday, but there's no quit in Dan Campbell’s team. Despite that ATS record and Philadelphia’s 2-5 mark, Detroit is an NFL betting underdog at home this Sunday, getting 3.5 points from the Eagles.

Here are our NFL free picks and predictions for Eagles at Lions on October 31.

Detroit opened as a 3-point underdog at home in Week 8 and that spread climbed to +3.5 at some books. The total for Sunday hit the board at 48.5 points and briefly moved to 47.5 before coming back to its original number. Use the live odds widget above to track any future line movements right up until kickoff and be sure to check out the full NFL odds before placing your bets.

The Eagles are 1-8 ATS in their last nine games as favorites. Find more NFL betting trends for Eagles vs. Lions.

I’m wary of a potential letdown spot from Detroit after a big game against Stafford and the Rams, especially with Campbell pulling out all the stops and having L.A. on the ropes entering the fourth quarter. So much so, I featured this game in my “letdown” section of my weekly spot bets article.

But since that was written, the Eagles have flown a few red flags that have me questioning their motivation entering Week 8. For one, it looks like RB Miles Sanders will miss time with an ankle injury, which means the best part of this Philly offense is now on the sideline – not that Nick Sirianni was using him right anyways.

Another warning that Philadelphia might not be the smartest bet in Week 8: all the trade talks. With the deadline looming as of this writing (Tuesday 12:30 p.m. ET), the Eagles have already done some wheeling and dealing (sending Joe Flacco to New York) and are rumored to be shopping former first-rounder LT Andre Dillard. Those deals aren’t being cultivated for immediate returns, but more planning for the future (and maybe bailing on the present).

Lastly, the Eagles are playing their second straight road game after getting blasted in Vegas (and not in the fun way) last Sunday and those frustrations are boiling over. Sirianni and this new coaching staff are catching criticism from all over the place, including veterans like Fletcher Cox, who bashed defensive coordinator Jonathan Ganon for his passive playcalling.

Hell, we’re four paragraphs in and haven’t even touched on the Eagles’ myriad on-field issues. Quarterback Jalen Hurts is regressing by the game with a passer rating of 83.0 in October, punctuated by a completion rate of just 57.9 percent and an average of just 6.5 yards per pass attempt this month.

Hurts is by far the worst QB this Lions team has faced so far in 2021, which isn’t saying much considering Detroit has battled a who’s who of elite passers (save for Justin Fields and Jimmy Garoppolo, who are still better than Hurts), facing Aaron Rodgers, Lamar Jackson, Kirk Cousins, Joe Burrow and Stafford.

Detroit should be the team sinking into despair after a winless start and some crushing close losses, but Campbell continues to motivate his guys and squeeze every bit of effort from a roster short on elite talent. The Lions offense is near the bottom in most categories but faces an Eagles stop unit boasting an EPA per play of +0.149 over the past three games (27th) with a toothless attack that’s gotten pressure on just 20.9 percent of dropbacks.

Simple logic points to Philadelphia – even the line move from -3 to -3.5 – but I’d rather put my money down on a winless home team that keeps swinging instead of a 2-5 visitor possibly packing it in.

Oddsmakers are expecting 48 points out of these teams in Week 8, but I don’t see how they get there.

Detroit’s passing game is passive at best, with Jared Goff averaging just 6.1 intended air yards per throw and ranking 27th in Pass Offense DVOA at Football Outsiders. That suits this Eagles defense fine, which protects against the big play but is susceptible to the dink-and-dunk strategy. That will keep gains short and the clock on the move.

Philadelphia made gains running the ball – but rarely handed off – and now doesn’t have that option with Sanders out of action. The Eagles have struggled to keep drives alive, converting on third down just 36 percent of the time over the past three games and owning an average of just 24:10 worth of possession in that span – dead last in the NFL.

The Lions are searching for positives on offense and one of those rare bright spots is D’Andre Swift.

He’s been a threat on the ground and through the air, with 262 yards rushing on 78 carries while putting up 391 yards receiving on 42 catches so far this season. Swift snagged eight of 10 targets for 96 yards and a touchdown versus the Rams last week – his biggest receiving day of the year.

Coach Campbell told the media the offense wants to get the ball in Swift’s hands more and that they’d like to expand on his role within the passing game. Swift has been slowed by a groin injury but has upped his production each week as he gets healthier.

Philadelphia has allowed 348 receiving yards to running backs on 49 total receptions – 7.1 yards per catch. On the ground, the Eagles have been rolled for 820 yards from rival RBs, which sits second-most in the NFL. Philly ranks 29th in run defense DVOA entering Week 8. 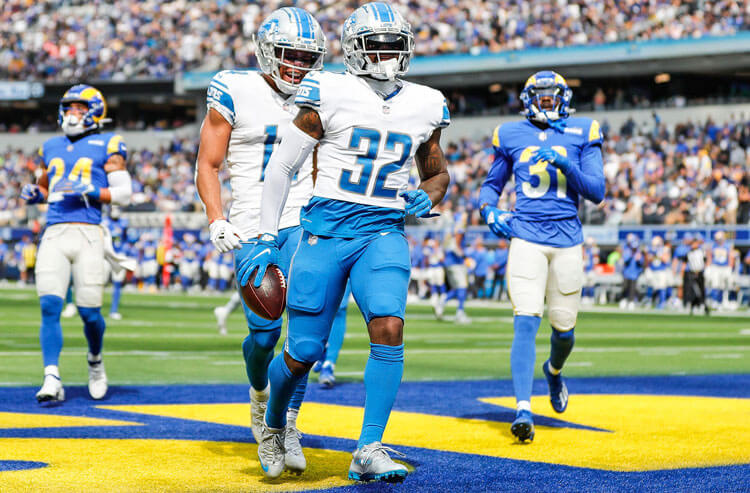 Eagles vs Lions Week 8 Picks and Predictions: Are The Eagles Packing It In?
Provided by