Washington has somehow strung together four straight wins and will look to keep it rolling against America's Team as 4.5-point home dogs. Can Dallas get it done on the road, and possibly in the elements? Find out in our Cowboys vs. Washington picks.

The race in the NFC East is tightening up and could get a little closer if the Washington Football Team can keep their four-game winning streak alive against the visiting Dallas Cowboys in Week 14.

Washington is one of the hotter teams in the NFL but is by no means blowing opponents away, winning each of its last two contests by scores of 17-15. Dallas snapped a two-game skid with an equally ugly victory at New Orleans last Thursday and is laying as much as 4.5 points on the road this Sunday.

Here are our NFL free picks and predictions for Cowboys at Washington on December 12.

Dallas opened as a 4.5-point favorite and jumped as high as -5 before action on Washington moved the spread down as low as -4 across most markets. The total for this divisional rivalry hit the board at 49 points and is down to 48.5 as of Tuesday.

Cowboys vs Washington picks and predictions

The opening spread may not have shown Washington much respect but the early play that moved this spread down from +4.5/+5 to +4 on Monday did. While the adjustment isn’t that significant – pushing through dead numbers – it shows that the betting markets are buying into the WFT’s streak.

Washington has put this run together against some quality defenses, taking down Tampa Bay, Carolina and Seattle in the first three games and has slowed up some solid quarterbacks during this streak as well, getting wins against Tom Brady, Russell Wilson and Derek Carr.

The Cowboys present both of those attributes, with a capable quarterback in Dak Prescott and a loaded receiving corps backed up by an opportunistic defense that ranks No. 4 in DVOA at Football Outsiders. Luckily for Washington, Dallas’ biggest weakness in recent games is the Football Team’s biggest strength – and the engine powering this late-season push.

Washington has run up and down opponents in the past four contests, amassing 548 total yards on the ground. That rushing attack hasn’t been explosive, but it has been relentless and that’s helped eat up time of possession in a big way. Washington has clocked in with an average TOP of 37:36 and that hasn’t left opponents much time to do damage with the football.

The Cowboys have been solid against the pass and depend heavily on those takeaways via interceptions, but don’t show the same stoutness on the ground. Dallas has been rolled for 715 rushing yards (4.7 yards per carry) in their last five games while watching those foes chew up an average of 33:03 in clock with the ball.

Washington running back Antonio Gibson is heading up the dominant RPO attack in D.C., totalling 358 yards on the ground during this winning streak while also breaking off gains in the short passing game. Fellow back J.D. McKissic – an even more dynamic dual-threat - is working his way through concussion protocols after missing Week 13.

This will be Dallas’ second straight road game – part of four straight away from Big D – and an outdoor game in December, which never sits well with America’s Team. The early forecast for FedExField is calling for possible rain and wind (gusts up to 22 mph) with temperatures in the low 40s.

A run-heavy approach from Washington will keep the clock ticking and scoring limited. Dallas hasn’t been able to slow up opposing runners recently but should at least put some pressure on WFT quarterback Taylor Heinicke when he does drop back.

The Cowboys returned top passer rush, DeMarcus Lawrence, in last week’s win over New Orleans, and he had an instant impact with a QB hit and two deflected passes at the line. Tank could possibly get his partner on the other end back in Week 14, with DE Randy Gregory trending for a return as well as DT Neville Gallimore.

Heinicke won’t have much time to for big plays to develop with the Cowboys pass rush at full strength and won’t have his safety blanket either, with stud TE Logan Thomas out of action with a knee injury. In fact, Washington could be very thin at tight end with Ricky Seals-Jones missing three games with a hip injury, leaving blocking TE John Bates as the starter.

As for Dallas’ offense, the passing game is nearly full strength with Amari Cooper, CeeDee Lamb and Michael Gallup all lining up last Thursday. Even with those top targets, the Cowboys continue to struggle on third downs. They’ve converted just 24.39% of those shots over the past three games and face a Washington stop unit that has stuffed foes on 27.59% of third-down tries in that same three-week span.

With the tight end situation a mess and J.D. McKissic up in the air for Week 14, Antonio Gibson will be a one-man army for Washington.

As mentioned, Gibson has tallied 358 rushing yards over the past four outings as well as 72 yards receiving, including five catches on six targets for 23 yards through the air with McKissic out against Las Vegas last Sunday.

The Cowboys rank No. 19 in Run Defense DVOA on the year and have allowed ball carriers to break for bigger gains, giving up the 11th most second-level run yards and 11 total runs of 20 or more yards – third-most in the NFL. 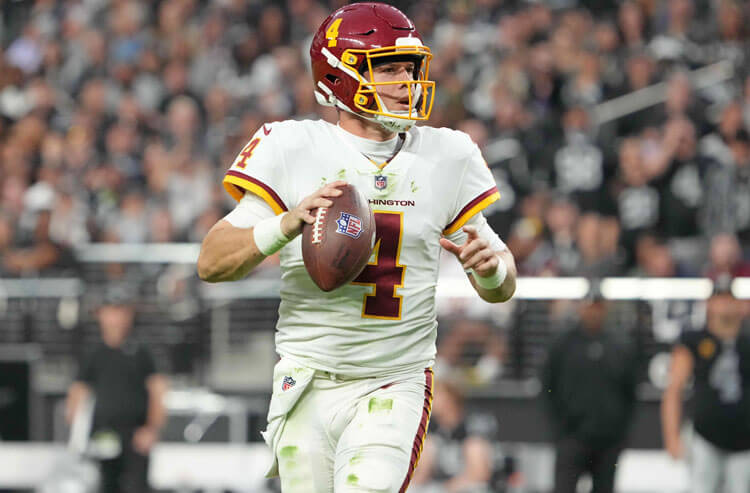 Cowboys vs Washington Week 14 Picks and Predictions: Can WFT Catch Dallas in NFC East?
Provided by