Our preview expects the Texans to struggle offensively (again), leaving the door open for the Seahawks to build on last week's 30-point offensive performance. Read more in our NFL betting picks and predictions for Seahawks vs. Texans.

The Seattle Seahawks finally got the offense rolling last week and will look to make it back-to-back wins when they travel to Houston to take on the Texans who'll be starting Davis Mills at quarterback. Russell Wilson & Co. enter the Week 14 contest as 7.5-point road favorites following Houston’s zero-point performance a week ago.

Can the Seahawks run the table and finish 9-8? Can the Texans be anything other than a tune-up game for their opponents, especially with Mills under center? Find out in our free picks, predictions and NFL odds for the Seahawks vs. Texans.

This line was Seattle -6.5 on the look-ahead and opened Seattle -7.5 Sunday night. The total has also fallen with the announcement of Davis Mills starting as it was 44.5 on the look-ahead but has fallen down to 42 as of Tuesday. Use the live odds widget above to track any future line movements right up until kickoff and be sure to check out the full NFL odds before placing your bets.

The Texans are 0-4 ATS in their last four games following a double-digit loss at home. Find more NFL betting trends for Seahawks vs. Texans.

Seahawks vs Texans picks and predictions

A terrible season has gotten even worse for the 2-10 Houston Texans who lost quarterback Tyrod Taylor in last week’s shutout loss to the Colts. Likely one-and-done head coach David Culley will have to turn to Davis Mills again. Mills has started six games this season and has lost each and every one. The team has managed just seven touchdowns in Mills’ six starts this season.

Houston should be considered the worst team in football heading into Week 14. The Texans sit dead last in defensive success rate and dead last in EPA/play on offense. Finding one positive thing on this Houston team is like finding Waldo in Ayn Rand novel. Mills ranks 30th in ESPN’s QBR rankings and could make Jimmy Garoppolo’s Week 13 performance against the Seahawks look like a masterpiece.

The Seahawks defense did allow 6.5 yards per play to the 49ers last week but Seattle benefited greatly from three San Francisco turnovers and five red-zone trips where the Seattle offense scored three times. In many cases, we’d like to fade the Seahawks here as their 30-23 win wasn't pretty as they were outgained by 1.7 yards per play to San Francisco and had four first downs gained by penalties, but this is the Texans here. If Russell Wilson and the offense can muster 21 points off the league’s worst defense, then Houston’s league-worst offense will have difficulties keeping up.

Wilson looks like he is getting healthier each week and last week was no exception as he finished with 231 yards passing and a pair of touchdowns. He got DK Metcalf involved for the first time since returning from injury and used a three-headed running back approach that totaled 131 yards and two scores. It may have taken three weeks, but the offense is starting to look like its former self and could be in for a big day versus a defense that’s giving up 27 points per game on the season.

Seattle played anything but a clean game last week but as long as Gerald Everett doesn’t repeat his Week 13 performance (responsible for three turnovers), it will be hard for the Seahawks not to cover. Houston lost 31-0 as 10-point road dogs last week with Taylor under center and lost 24-9 as 8-point home dogs to the Panthers in Mills’ first start. This is actually the shortest line we’ve gotten on a Mills start as he has been an underdog of eight (2x), 11.5, 17, 19 and 20 points in his first six NFL starts.

If this line decides to move north, to -8, it could very well move all the way to -9 or -9.5 for teaser protection (not allowing bettors to tease through a pair of key numbers in 7 and 3). We’ll lay the points with Wilson and the Seahawks.

If you missed the early number on this total that opened at 44, it’s tough to swallow taking the Under on 42 but still likely the right play. Houston’s offense has been awful with Mills under center averaging just 10.2 points per game and was held to under six points in three of those games. Rex Burkhead is the No. 1 running back and if the Seahawks can shut down Brandin Cooks (under 60 yards receiving in his last four games) the offense will stall out, especially with an offensive line that has given up nine sacks over the last two games.

Speaking of sacks, Mills has been taken down 21 times in his last seven games while also committing eight turnovers. The Seahawks forced three turnovers last week and gave up 16 points off of two turnovers and a missed kick to the 49ers. The Houston offense is not built to sustain long drives and with Mills’ skillset and the O-line sitting fifth in the league in holding penalties, the Texans are always just one play away from shooting themselves in the foot.

The Seahawks allow the fewest explosive rush plays per game in the league and ninth-fewest passing plays of 15-plus yards. Mills and the offense will have to march long distances to get their points and we don’t see that happening with the current personnel in Houston.

The Seattle offense hasn't been impressive over the last four games either and gained just 4.8 yards per play last week versus the 49ers. But any offense can look impressive versus the Texans. If Seattle can put up 30 points against the 49ers, there's a chance that Wilson could hang another 30-plus points this Sunday which has us nervous about taking any number below 44.

Expecting Mills and Houston to score 18 points is asking a lot, especially against a sleeper defense in Seattle that sits Top 10 against the rush and has allowed an average of 20 points per game over its last four contests.

We’re avoiding the game total and hitting the Under on the Texans’ team total of 16.5 at -120.

This is Mills’ second go as a starter in his first season in the league. There is a ton of tape out there on the third-round rookie and this offense was averaging just 12 points per game with Taylor over the last three games. Mills does nothing to improve the Texans who might be going through the motions at this point in what has been a terrible season right from the get-go. A coaching change is likely coming following the season’s end.

Houston sits last in points per game, last in yards per game and second-last in plays per game (Seattle is last) which equates to an offense that ranks last in yards per play and last in EPA/play. Houston has topped 16 points just three times in its last 10 games and is coming off a 31-0 loss at home in Week 13. They gained just 2.8 yards per play versus the Colts’ No. 25 pass defense and managed zero red-zone trips

Give us the Under 16.5 points on the Texans’ team total for our best bet for this Week 14 matchup. 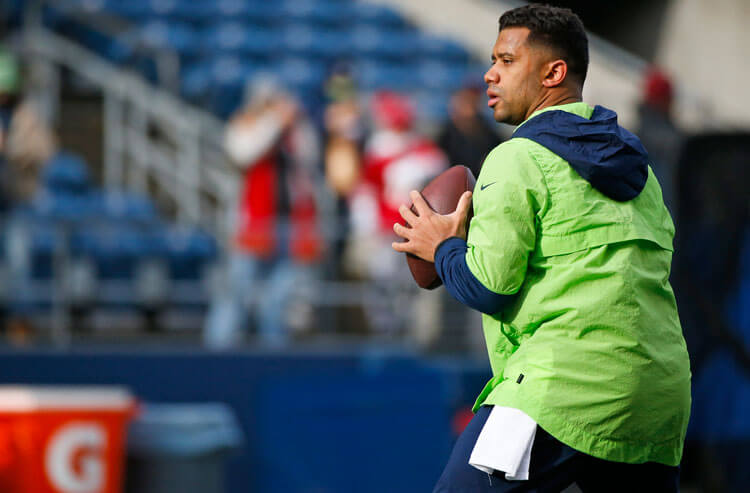