Arizona is off to a 2-0 start behind the dynamic play of quarterback Kyler Murray, who has torched defenses in the air and on the ground through two weeks. That will be no different Sunday against Jacksonville. Read more in our Cardinals vs. Jaguars picks.

The Jacksonville Jaguars are in disarray and now face a dangerous Arizona Cardinals team as they look for their first win of the season.

Urban Meyer and the Jags have the near-impossible task of stopping star Kyler Murray, who is off to an MVP-type start while leading Arizona, 7.5-point road chalk Sunday, to a 2-0 mark going into Week 3.

Check our best free NFL picks and predictions for Cardinals vs. Jaguars on September 26.

The Cardinals opened as 7-point favorites over the Jaguars and that’s since risen to 7.5, while the Over/Under remains the same with a total of 52. Use the live odds widget above to track any future line movements right up until kickoff and be sure to check out the full NFL odds before placing your bets.

The Jaguars are 0-4 ATS in their past four home games against teams with a winning road record. Find more NFL betting trends for Cardinals vs. Jaguars.

There couldn’t be two teams with more different seasons so far. The Jaguars are embarrassing themselves every Sunday and becoming a meme, while the Cardinals are slowly going from a Super Bowl afterthought to a dark-horse contender.

Let’s get started with the Jaguars, who are 0-2 and gave up a combined 60 points to the Broncos and Texans — hardly what you would describe as powerhouses. We knew the Jaguars defense wasn’t elite before the season but we expected them, and first overall pick Trevor Lawrence, to offer more offensively. They’ve been outscored by everyone but the Jets and Falcons — two teams that could at least argue that they’ve played a higher standard of defense.

Urban Meyer, in what seems like a weekly occurrence, has become a story yet again with another odd comment. This time he was caught telling the Broncos’ Vic Fangio that the NFL is like playing Alabama every week. It’s incredibly concerning that anybody coaching in this league would be surprised at the quality of their opposition.

Stats don’t offer much promise of things changing either, with the Jaguars currently sitting with the second-worst DVOA of any team in the league and with a schedule that is going to start getting more difficult over the coming weeks, beginning this Sunday, which will be Meyer’s first meeting against a genuinely good team.

When we discuss the Cardinals, the discussion begins with Kyler Murray, who has started the season in electric form. The 2019 first overall pick is second in the league in passing yards and touchdowns and has only turned the ball over three times.

His 73.5 percent completion rate is the best of his career and he's put up highlight-reel throws on his way to passing for 689 passing yards. It’s not just arm that's helping him enter the early MVP conversation, however, as he adds another offensive layer with his running game. He’s averaging 5.1 yards per carry and already has two rushing touchdowns. That’s a serious concern for a Jaguars defense that allowed Tyrod Taylor to rush for 40 yards on four carries.

There’s only one way in which this game is going to unfold and that’s with the Cardinals dominating and taking a big lead. Take the 7.5-point hit and back Arizona. You likely don’t need to be too worried about a backdoor cover either, with Lawrence having the worst off-target throw percentage over the last 11 years through his first two weeks of play.

When you look at the Jaguars' past two results, they let two teams led by Taylor and Teddy Bridgewater put up 60 points on them. In that same time frame, the Cardinals have been the league’s second highest-scoring offense, putting up 72 points.

It’s very easy to see Murray eviscerating the Jaguars' D and leading the Cardinals to 40-plus points. I don't see how Jacksonville will be able to stop Murray in the air or on the ground.

That should mean that all we’ll need is one or two touchdowns by the Jaguars, who’ll be chasing all game. That feels very likely, in which case you’ve got to back the Over here.

In addition to keeping an eye on Murray’s rushing yard line, for the reasons mentioned above, we have to look at James Robinson, who continues to see bizarre usage from Meyer. Robinson has continued playing well, averaging 4.5 yards per carry, after a brilliant rookie season, but he just isn’t getting enough volume. He got five carries in Week 1 and then another 11 in the loss to Denver.

So far the Cardinals have been up against Dalvin Cook and Derrick Henry — two of the league’s best rushing talents — and had mixed results. They gave up 131 yards to Dalvin Cook last week but you have to remember that the game was tight, so it made sense that Minnesota fed their bellcow.

Against the Titans, when they took a big lead, as they will this Sunday, we only saw Henry rush for 58 yards. With the Jaguars likely playing from behind all game, in addition to Meyer’s reluctance to feed Robinson, it makes sense to back Under 49.5 rushing yards here. 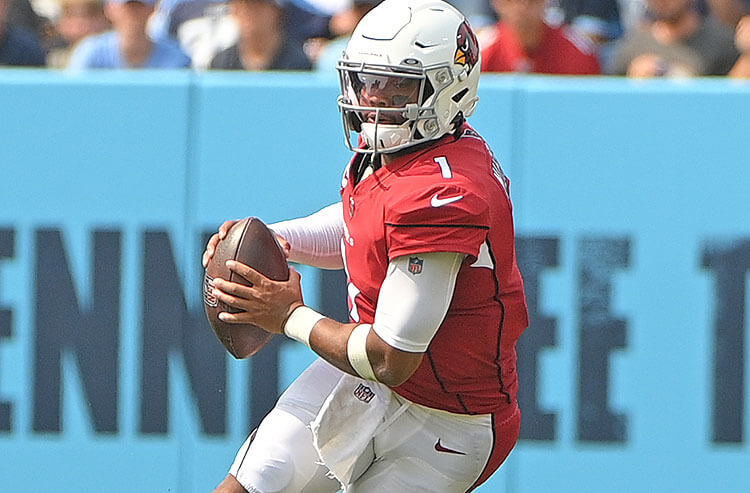