The Lions are starting over in 2021, with Matthew Stafford gone to L.A. and Jared Goff now under center. Our picks take a look at whether Dan Campbell's Detroit can keep things close against the 49ers in a Week 1 spot that has been favorable to underdogs.

One of the biggest spreads on the NFL betting board for Week 1 is a clash between the San Francisco 49ers and Detriot Lions, with the Niners installed as 8-point road favorites.

San Fran had an injury-plagued 2020 season and aims to bounce back with a return to the playoffs. The Lions might be ideal early-season fodder as they rebuild with a new quarterback and coach, and have the second-lowest win total of 2021 at an O/U of 4.5.

Here are our best free 49ers vs. Lions picks and predictions for Sunday, September 12, with kickoff at 1 p.m. ET.

The 49ers opened as 7.5-point chalk but the line has shifted at most books to -8 as of 11 a.m. on September 10. The Over/Under has also seen movement with the total opening at 46 before dropping to 45. Be sure to check out the full NFL odds before placing your bets, and also view the full line movement for this game.

It's a new era in Detroit, with Matthew Stafford gone after 12 years as the Lions' franchise quarterback and a new head coach in the fold with former tight end Dan Campbell bringing his lunchpail attitude to the sidelines.

Although Jared Goff brings steady play at QB, he has a tendency to really struggle under pressure and doesn't have Stafford's ability to attack deep. With the proper talent surrounding him, he can succeed, unfortunately for Lions fans, he doesn't have that in Detroit.

The Lions might have the worst group of skill position players in the NFL. They're also brutal on defense where their pass rush, run defense, and secondary all ranked near the bottom of the league a year ago.

The 49ers suffered from a case of the Super Bowl runner-up hangover last season, getting decimated by injuries on both sides of the ball and finishing with a 6-10 record. If they stay relatively healthy this season, they are more than capable of making the playoffs but covering a spread of more than a touchdown on the road in Week 1 is no easy task.

Especially when you consider that not everything is rosy for a Niners squad that finished 20th in the league in offensive DVOA a year ago. Sure injuries to QB Jimmy Garoppolo and star tight end George Kittle hurt their ability to score, but their WR corps consists of talented but unproven receivers. And, Garoppolo might be hearing footsteps behind him after the Niners traded up to pick quarterback Trey Lance with the third pick in the draft.

Keep in mind that since 2011, Week 1 underdogs of more than seven points have gone 15-8 ATS. It might not be pretty but Campbell's new-look Lions should be tough enough in the trenches to cover this big spread.

Even with a plethora of injuries on defense last year, the 49ers excelled in that department, ranking sixth in the league in defensive DVOA. They also allowed the fourth-fewest passing yards per game (207.9) despite missing edge rushers Nick Bosa and Dee Ford for virtually the entire year.

Dan Campbell's hard-nosed approach and the Lions' lack of outside weapons will lead to Detroit leaning on the running game to try to eat up the game clock. After all, Goff has always been at his best with a running game to take pressure off him, and the Lions added Jamaal Williams at running back and drafted Penei Sewell to beef up an already solid offensive line.

The Niners under Kyle Shanahan also love to run the ball and they ranked second in the league in rushing play percentage during their ultra-successful 2019 season. Expect the 49ers' defense to limit Detroit's aerial attack while both teams play a run-heavy style on offense. Take the Under.

San Francisco's George Kittle blew up as a sophomore in 2018, setting a tight end record with 1,377 receiving yards (since broken). He went over 1,000 yards again in 2019 despite missing a pair of games, and last season he contributed with 634 yards in just eight games as he battled through injuries and dealt with spotty QB play.

Kittle is now fully healthy and with Garoppolo eager to hold on to his starting spot look for the Niners QB to look early and often at his most reliable target. With Kittle averaging 80.6 receiving yards per game over the last three seasons and Detroit allowing a whopping 284.9 passing yards a year ago, take the Over 56.5 on Kittle's receiving yards total. 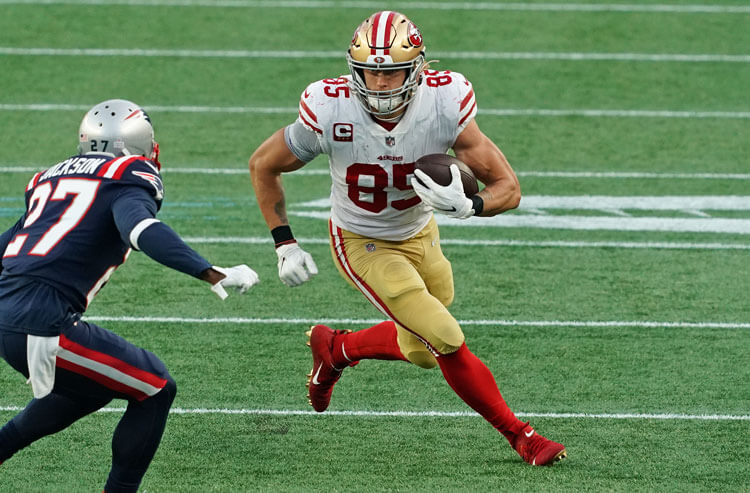