The Seahawks and Colts both underwent makeovers on offense over the offseason, and both will be tested right out of the gate. Find out if Carson Wentz can finally crack Seattle's defense in his new digs or if Seattle can get rolling again with our picks.

After Russell Wilson's offseason of discontent, the Seattle Seahawks and their star quarterback will open the 2021 NFL betting season with an out-of-conference visit to the Indianapolis Colts.

New Colts passer Carson Wentz knows all about discontent following an ugly divorce with the Eagles, with the former No. 2 overall pick seeking a fresh start in Indianapolis. August foot surgery put Wentz's Week 1 availability in doubt but he is ready to go for Sunday, and he'll lead the 2.5-point underdog Colts into Lucas Oil Stadium.

Here are our free NFL picks and predictions for Seahawks vs. Colts on Sunday, September 12.

The line opened with the Colts as 2.5-point favorites in May but flipped to Seattle -2.5 in early August, with Carson Wentz's speedy return from foot surgery not enough to change anything as it remains -2.5 on September 7. The total hit the board at 52 and, after a brief dip all the way down to 46 following news of Wentz's surgery, has jumped back up to 49.5 ahead of Week 1. Be sure to check out the full NFL odds before placing your bets, and also view the full line movement for this game.

The Over is 5-1 in the Seahawks' last six games in September and 5-0 in the Colts' last five Week 1 games. Find more NFL betting trends for Seahawks vs. Colts.

Despite all the noise and uncertainty surrounding the Seahawks ahead of this season, there's plenty of reason for optimism.

Starting on offense, where Wilson should shed late-season demons from a year ago and retain his place among the league's elite passers, aided by a blossoming superstar in DK Metcalf and Tyler Lockett, with whom he has a nearly unstoppable connection. Seattle rolled it back with tailback Chris Carson, re-signing the bruiser in free agency to retain one of the league's best early-down talents. Up front, the acquisition of Gabe Jackson gave the Seahawks a third above-average starter on what should be their best offensive line in years.

Seattle's defense, while littered with unproven young players, has an established spine with Jamal Adams and Quandre Diggs making up one of the NFL's best safety tandems and Bobby Wagner maintaining his elite play at linebacker, while Carlos Dunlap and Poona Ford provide three-down impact on the defensive line. The question marks are genuine, with cornerback of particular concern, but after finishing 11th in weighted DVOA on defense a year ago, confidence in Pete Carroll and the staff to scheme to a level of competency is there.

The same rings true for the Colts on offense, where competency should be the baseline as long as Frank Reich remains on the sideline. They're not without question marks, with a thin receiving corps, but a patchwork offensive line should be mitigated by the added mobility Wentz will bring.

The biggest concern in Week 1, however, may be Wentz himself. Carroll's defense has dominated Wentz in their matchups, with the QB a career 0-4 against Seattle while completing 61 percent of passes with six teeders and six picks, and taking 14 sacks. His AY/A of 4.93 against the Seahawks would be the lowest season-long average since Josh Rosen's 4.8 in 2018 (and is almost two full yards below his career AY/A of 6.8).

Indy's defense should matchup against Seattle's offense well in a couple of spots but its pass rush is worrisome. Kenny Moore is one of the league's best slot corners with the requisite athleticism to stick with Lockett off the line, while DeForest Buckner is simply a monster who regularly wreaked havoc on Wilson and the Seahawks while a member of the 49ers. But, again, how much he'll be able to do as a one-man army has to concern the Colts.

The Seahawks have a massive advantage under center and a superior offense, with the defenses a wash on paper. Not even the schedule gives Indianapolis an advantage, as Seattle is 11-1 SU (a mark that included a 10-game win streak) in 1 p.m. ET kickoffs dating back to November 2016.

The Seahawks tore out of the gates a year ago, averaging 34.25 points per game over the first half of the season, before opposition adjustments and internal power struggles led to a major backslide from Wilson and the offense. New OC Shane Waldron should have Wilson doing what he does best, operating out of play-action and moving pockets, throwing quick-hitters in rhythm, and taking deep shots when available.

The Seahawks' new-look offense will get an ideal Week 1 test coming up against a Colts team that predominately plays zone coverage, with defensive coordinator Matt Eberflus being a Tampa 2 disciple. Infamously, an inability to move the ball against Cover 2 looks led to disaster for Seattle by the end of last season and ultimately saw former OC Brian Schottenheimer's dismissal. A greater emphasis on the quick game, creating yards after the catch, and stretching defenses horizontally in addition to vertically, should allow Wilson and Seattle to continue to produce at a high volume — whether it's against two-high looks or otherwise.

While Seattle's offensive infrastructure crumbled last year, Indianapolis' offense under Reich continued to be personnel-proof. Reich manufactured a respectable season out of Philip Rivers despite T.Y.Hilton's continued dropoff and a rotating cast of pass-catchers around them.

Regardless of what one thinks of Wentz, there's good reason to expect the Colts to at least match last year's offense, which ranked 12th in DVOA. There's familiarity between Wentz and Reich, a promising X-receiver in Michael Pittman Jr., a blossoming star in Jonathan Taylor, and one of the league's most versatile pieces out of the backfield in Nyheim Hines.

Indianapolis can continue to operate as an efficient offense, with an added element of explosiveness, as even in 2020 — Wentz's nadir of health and confidence — he still attempted more deep passes than Rivers and was tied for the fourth-highest average intended air yards, at 9.1, while Rivers ranked 30th at 7.4.

The days of the Legion of Boom in Seattle are long gone, and the early part of last season was a brutal reminder of that, as the Seahawks' defense was on a record-setting pace as they allowed an average of 471 yards per game through five contests. While they would eventually get healthy and alter their scheme to perform well down the stretch (they finished 11th in weighted DVOA against the pass), the season-long marks were still ugly: 31st in pass defense and 20th in pass defense DVOA.

One of the league's best safety duos will enter the year healthy and with games under their belt together — something that couldn't be said for Diggs and Adams a year ago — but Seattle faces major question marks at cornerback as it will now start the most undersized corner of Pete Carroll's tenure in D.J. Reed, who performed well in limited action last season, and Tre Flowers, who has struggled as a starter throughout his career.

The matchup means it's a great spot for Pittman to begin a sophomore campaign many expect to feature a breakout. Though a leg injury cost him most of the first half of his rookie season, Pittman flashed the traits that made him a dynamic ball-winner at USC over the second half of the season and had a higher yards per route run from Week 9 onward than Keenan Allen, Chase Claypool, and Robby Anderson, among others.

With Hilton starting the year on I.R., Pittman will be the Colts' No. 1 receiver and in line for a target share between 20 and 25 percent, if Reich's history is an indicator. Pittman ended the season strongly, going over 100 yards in Indianapolis' playoff loss to the Bills, and he can start Year 2 in a similar manner as the Seahawks come to town. 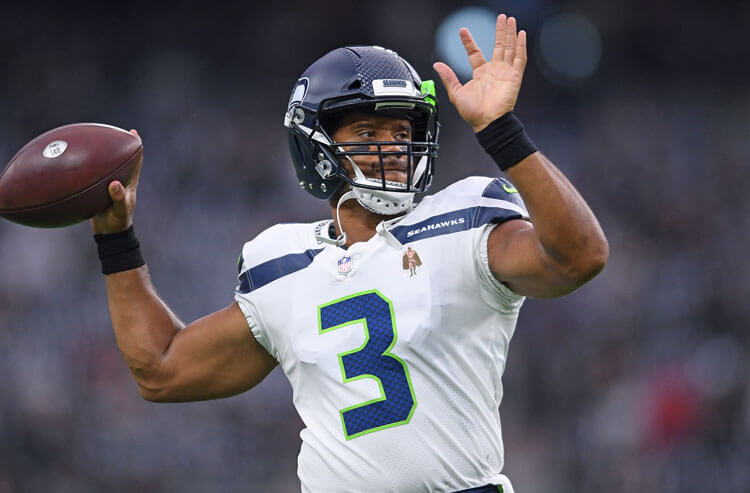