Spain vs Sweden Euro 2020 Tips and Predictions: How Swede It Is

Spain's disrupted week of practice has given Sweden a golden chance for a result to open the Euros. Can the Swedes capitalize and gain at least a point? Check out our tips and predictions for Spain vs. Sweden.

Three-time champions of Europe Spain will begin their Euros in Group E play against Sweden on Monday in Seville.

Sweden, without their greatest ever player in Zlatan Ibrahimović for the tournament after he came out of international retirement before getting injured, are just behind Poland with the third-longest odds in the group, at +600, while Spain are the far-and-away favorite at -300.

Keep reading for our tips and predictions for Spain vs. Sweden on June 14.

PointsBet USA has Spain as heavy -290 chalk in today's final Euro 2020 game, with Sweden a +900 underdog and Draw +380. And as of 1:45 p.m. ET, practically all the action is on the Spanish side, with the favorite drawing 93 percent of tickets and 95 percent of cash. Sweden is landing a minuscule 3 percent of tickts and money, while Draw is getting 4 percent of tickets/2 percent of dollars. On the total of 2.5, the Over is attracting 56 percent of bets/68 percent of money.

It will be a sunny, warm night in Seville for Sweden and Spain's Euro match, with temperatures expected around 85 degrees Fahrenheit.

Ahead of the 2018 World Cup, then-Spain manager Julen Lopetegui was announced as Real Madrid manager, to take over after the tournament's conclusion. The next day, with the squad already in Russia, he was fired by the national team. Yet, somehow, the lead-up to this tournament maybe even worse for the Spanish National Team.

Just days before Spain's Euro-opening game against Sweden, key players Sergio Busquets and Diego Llorente tested positive for COVID-19, sending the entire squad into quarantine and, in a crucial week of preparation, they could train only as individuals. While a second squad was put on standby and participated in Spain's friendly, a greater crisis seems to have been averted, with Spain now vaccinated — three days before they begin against Sweden.

While neither Busquets nor Llorente's absence should be massive early in the tournament, with Thiago more than capable of filling in in the center of the park and Aymeric Laporte and Eric Garcia able to renew a one-time Manchester City center-back pairing, the impact of their disrupted lead-up shouldn't be understated. (And that is without considering possible side-effects for any players from the vaccine.) For an unconvincing Spain side, it's a genuine reason for concern.

Spain's three competitive matches in 2021, all World Cup qualifiers, do little to dispel concerns. Spain began qualifying with a 1-1 draw, at home, to Greece and followed it up with unconvincing victories over Georgia (2-1) and Kosovo (3-1 at home).

There's still undeniable quality in this Spain side, and with games against Poland and Slovakia to come, there's no huge reason for concern around their chances of getting out of the group stage. However, as a team that plays a possession style with a ton of passing and tries to hit teams on the break, the hit to their conditioning a lack of training will have had will impact their performance against Sweden.

With Spain likely to struggle to break down a compact 4-4-2 from Sweden, a result for the Swedes, be it a victory or draw, looks to be in the cards. (A double chance play on Sweden, for the win or draw at +175, is great value too.) With the draw offering even better odds in recent days, we're going to take the teams to take a point each.

Between Spain's disrupted Euro preparation and Sweden's Burnley-esque commitment to 4-4-2, this one could be a bit of a slog at times. While Spain will still undoubtedly carry the majority of possession, what they do with it would be coming into question, COVID outbreak or not.

For all the talent Spain boasts throughout their program, and in their senior squad, their strikers still leave one wanting. Juventus forward Alvaro Morata will continue to lead the line but he has never been a high-producing goalscorer. Morata has averaged around 0.50 goals per 90 minutes at club level over the past three years and has added just six goals in 16 national team appearances over that same span. Barcelona starlet Pedri could breakout this summer, and City's Ferran Torres ended the domestic season on a personal high, but it's difficult to take anything more generous than a wait-and-see approach to Spain's attack.

Sweden has a breakout candidate themselves in striker Alexander Isak, who will start in Zlatan's absence. The 21-year-old enjoyed a breakout season with Real Sociedad in La Liga, scoring 17 times in 30 starts, and he scored three times in three starts in Euro qualifying (and has since added another in two World Cup qualifiers). Between Isak and talisman Emil Forsberg, Sweden should be able to convert the good chances they get — just don't expect many chances at all.

As long as Sweden don't take a page from Turkey's book and not try to play out at all, then concede and open up anyway, this should be a low-scoring affair. Take the Under. 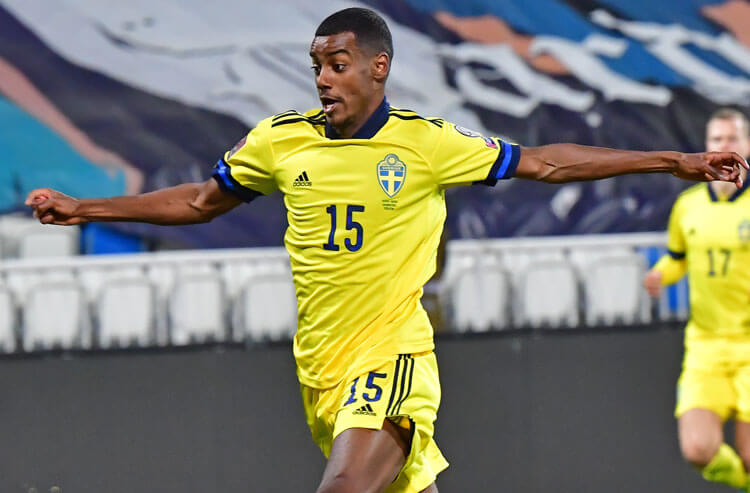 Spain vs Sweden Euro 2020 Tips and Predictions: How Swede It Is
Provided by