Legendary striker Robert Lewandowski is coming off a record-setting season with Bayern Munich and now gets Group E's weakest team to begin the Euros. Will he keep his goal-scoring ways going? Check out our Poland vs. Slovakia tips and predictions.

The first stage of play in Group E at this year's Euros will wrap up on Monday, with Poland taking on Slovakia in St. Petersburg, Russia. Poland are slightly edging Sweden (+550 to +600) for the second-best odds to win the group, with all three countries chasing favorites Spain.

Poland can get off to a great start, however, in an advantageous matchup against Slovakia. Can Poland's captain and best-ever player secure three points for his country? Find out in our tips and predictions for Poland vs. Slovakia.

Poland landed on The SuperBook's three-way moneyline at -125 and moved out a few cents to -130, with Slovakia correspondingly moving from +420 to +460 and Draw from +240 to +230. "We need Slovakia or the Draw," SuperBook risk manager Neil Fitzroy said at 12:45 a.m. ET Monday, about 11 hours before game time. "Again, not much interest in the game, but a decent amount of parlay liability on Poland." The total is at 2 (Over -125). "Not much to it for straight bets, just some parlay liability" on the Over, Fitzroy said.

Slovakia and Poland will have a cloudy evening in St. Petersburg in their Euro group stage game, with temperatures around 65 degrees Fahrenheit.

Slovakia, on paper, have the formula to grind out a result or two during the group stage. They boast strength throughout the middle of their squad, with goalkeeper Martin Dubravka excelling with Newcastle United for several seasons, Milan Skriniar a genuinely great center-back, Juraj Kucka tireless in midfield, and Slovak legend Marek Hamsik roaming free as a No. 10.

However, Slovakia are likely to fall victim to the circumstances around this year's Euros. Coming after the most difficult, compressed domestic season in history, certain squads are certain to suffer from tired legs. Russia, for example, couldn't get on the ball against Belgium save for a brief positive spell, after tireless running took them through the Round of 16 at the World Cup.

Slovakia, too, could be a team that suffers. Kucka, absolutely vital to Slovakia's progression through midfield, is 34-years-old now and just played nearly 2,500 minutes in Serie A. Hamsik, Slovakia's best and most creative player, on the other hand, has barely played over the last year after a misguided move to China — but he, too, turns 34 next month.

Hamsik was key in Slovakia getting through the group stage at Euro 2016, and his importance to his country hasn't lessened. His impact, however, has, as he hasn't hit double-digit goals or assists since his age-29 season in 2016/17.

Hamsik's fading influence and a lack of attacking threats in Slovakia's side will mean they'll defend deep, with two banks of four or even a back-four and then a bank of five. Poland's development into a team more comfortable with playing with the ball and breaking teams down will be massive against Slovakia. So too will be maximizing whatever chances they do get, with Slovakia setting out to limit the danger they'll face by playing deep and with two solid defensive lines.

While Dubravka is a great goalkeeper, asking Poland's lead man not to take his chances is an impossibility. Poland will start the Euros with a win.

Robert Lewandowski is coming off a record-setting season with Bayern Munich, breaking a record that was thought to be untouchable as he scored 41 times in 28 Bundesliga starts, the most in a single season at a mind-boggling rate of 1.50 goals per 90 minutes.

Lewa delivers on the national stage, too, and hasn't wavered since the World Cup as he has entered his 30s. All 10 of Lewandowski's international goals since Russia 2018 have come in competitive fixtures, with two in the Nations League, five in Euro qualifying, and three in two World Cup qualifiers.

Famously one of the fittest professionals around and a maniacal trainer, the compressed season was unlikely to impact Lewandowski this summer. However, an injury suffered in the spring may have turned out to a blessing, as he sat out for over a month in recovery.

Poland is going to get Lewandowski's best at the Euros, and that means goals. Back him to score in Poland's opening game. 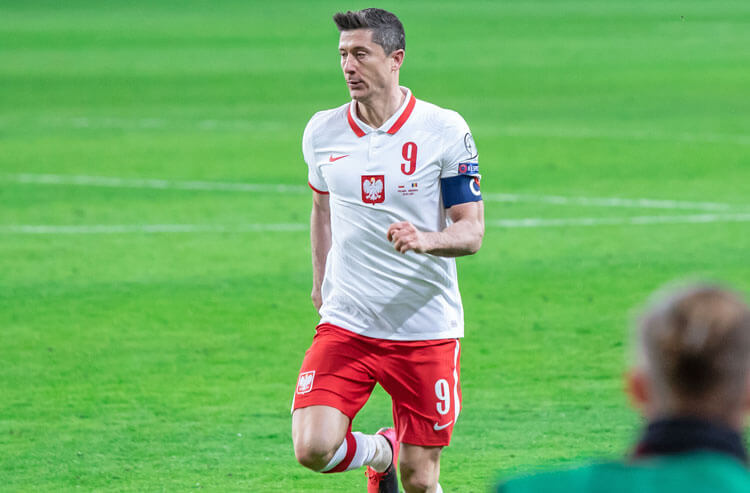