The 2021-22 season came to a close with a familiar sight, as the Champions League's most successful team extended its record. Real Madrid edged out Liverpool 1-0 to be crowned kings of Europe for a 15th time, completing a wild run through the knockout stages.

Despite holding the European crown and receiving a friendly result in the Champions League group stage draw, the holders are just fifth on the UCL odds board — and behind Liverpool, who fell to Madrid in the final and were humiliated to begin this year's group stage.

With the group stage underway, let's take an early look at the full odds to win the Champions League.

Live odds courtesy of DraftKings Sportsbook. Be sure to compare Champions League odds before placing your bets.

Favorites to win the Champions League

An unbelievable collapse against Madrid meant another year of waiting for City, a club absolutely desperate to finally lift the Champions League. While their ability to come up short year after year is astonishing, they are rightfully favored. They have the best manager and best squad in the world, and added arguably the world's best No. 9 in Erling Halaand.

City received a relatively easy draw, placed in Group G alongside Sevilla, Dortmund, and FC Copenhagen. After a group-stage opening 4-0 win over Sevilla, they knocked off Dortmund 2-1 with a Halaand acrobatic finish sealing the win.

Like City, PSG are desperate to win the Champions League, and like City, they somehow find a way to fall short year-after-year. The Parisian club surprisingly retained Kylian Mbappe ahead of the phenom becoming a free agent and again entered the season with one of Europe's best squads.

The group stage will be no easy route for Lionel Messi & Co., with PSG being drawn into Group H with Juventus, Benfica, and Maccabi Haifa, but they got out of the gates well with a 2-1 win over Juve and then a comeback win over Maccabi Haifa.

Despite losing record goalscorer Robert Lewandowski in the summer, Bayern Munich have renewed their charmed life in the Bundesliga with three wins in three games and 15 goals scored while having conceded just one.

Bayern are in this year's Group of Death, however, with the German giants drawn into Group C alongside Barcelona — and their new No. 9, Lewandowski — as well as 2020-21 Serie A champions Inter Milan and Viktoria Plzen. The German champions went away to Inter to begin group stage play, left 2-0 victors, then held off Barca at home to start with six points from six.

To get ahead of the pack there are a few trends that may help you when choosing your Champions League winner:

These odds are constantly adjusted throughout the summer as players get hurt, suspended or transfer. Once the season begins, title odds will change as teams win and lose games and as more players get hurt or are suspended. Sportsbooks will also adjust the Champions League odds based on handle and liability to certain teams.

This means that on a $100 bet, you'll stand to win $250 if Bayern wins the Champions League. If it's close to the end of the tournament you might see that a team is has a minus sign (-) ahead of its odds.

This means that you would need to bet $120 to win $100 on a Barcelona championship.

Above we have posted the American odds for the Champions League. However, these are easy to convert to decimal odds or fractional odds with our odds converter tool.

Real Madrid have won a record 15 Champions League titles, including six over the past 10 seasons. 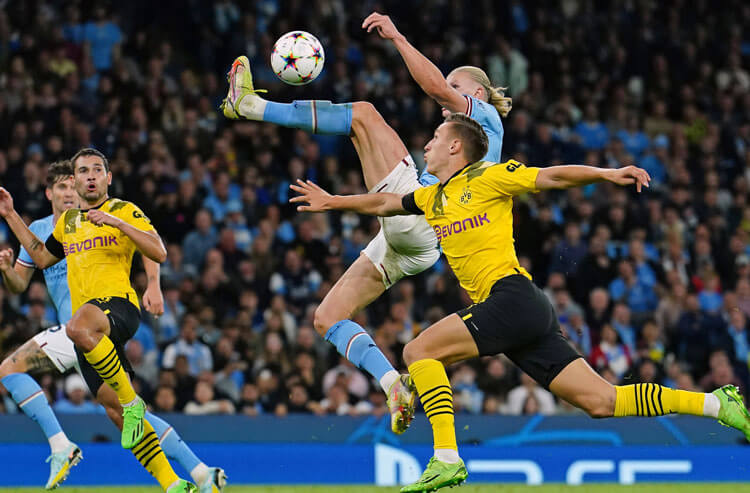