Scotland vs Czech Republic Euro 2020 Tips and Predictions: Scotland Returns to the Spotlight

Scotland and the Czech Republic have the longest odds in Group D, but the way the sides match up against one another should make for an entertaining game. Check out our tips and predictions for Scotland vs. Czech Republic.

After more than 20 years away from a major tournament, Scotland returns at the Euros on home turf, with the Czech Republic coming to Glasgow in Group D play.

The Czech Republic will come into this one as +175 favorites, while Scotland are slim +180 underdogs.

Here are our best tips and predictions for Scotland vs. Czech Rebuplic on June 14.

The SuperBook opened this match at Czech Republic +155/Scotland +195/Draw +200. As of 12:30 a.m. ET Monday, a few hours before kickoff, the three-way regulation moneyline has flipped to Scotland +165/Czech Republic +205/Draw +190. "Money came in on Scotland +195," SuperBook risk manager Neil Fitzroy said. "Not much interest in the game, but we need the Czech Republic or preferably the Draw. Draw is usually a good result for the house." The total is stable at 2 flat (-110). "A few smaller bets on the Over, but not much of a decision," Fitzroy said.

Scotland and the Czech Republic will get an overcast day for their Euro opener, with temperatures around 60 degrees Fahrenheit and a five percent chance of rain.

Scotland and the Czech Republic set up as a fascinating tactical matchup, and it should be a tightly contested match as a result. Both teams' strengths are in defense, with Scotland boasting two excellent left-backs and having found a system that works with a back five, while a double pivot midfield has worked wonders for the Czech defense, despite injuries and suspensions hurting their backline recently.

Scotland, with Arsenal left-back Kieran Tierney and Manchester United midfielder Scott McTominay on either side of a third center-back, look to play out of the back with the ball on the floor, with Tierney and McTominay often driving forward in possession. However, the Czech Republic's use of a high press could cause issues for Scotland in doing so, and they have ranked toward the top of European sides in ball recoveries in the attacking third.

Just as the Czech Republic can disrupt Scotland's preferred way to build in attack, Scotland are well-equipped to do the same to their opponents. While Scotland drives forward centrally before playing into wide spaces, the Czech Republic use their full-backs as outlets and attack down the wing.

Andy Robertson, who is among the best left-backs in the world, and Tierney, will be able to suffocate any attack attempted down the Czech's right. Unfortunately, the Czech Republic won't have any better answers on the left, after a breakout season for bright young left-winger Lukas Provod ended with a torn ACL, while the likely starter on the left, Jakub Jankto, operates more inside than out, which plays into Scotland's numerical advantage.

Both sides are well-equipped to foil their opponents' attack, and with more difficult matches ahead for both sides with Croatia and England on deck, Scotland and the Czech Republic will gladly settle for a draw.

With both teams' strengths found in defense, it wasn't a surprise to see both Scotland and the Czech Republic emphasize keeping teams out in qualifying, despite a fairly wide-open pool of teams in their respective groups beyond the clear top teams (Belgium and England).

Neither team is likely to attack with great intent in this one, as both will be looking to put themselves in the best position to either come second in the group or advance as one of the best third-place teams — regardless, goal differential will be key by the end of the group stage.

Scotland will no doubt be buoyed by playing at home and the energy early could see a rapid start, however, the Czech Republic have the ability to answer. Whether it's striker Patrik Schick, who combines well with their two wingers, or rising star Adam Hlozek off the bench, they won't be without options if they need a goal.

The styles of these two sides should make for a fairly entertaining game, but don't expect much more than a 1-1 draw and take the Under. 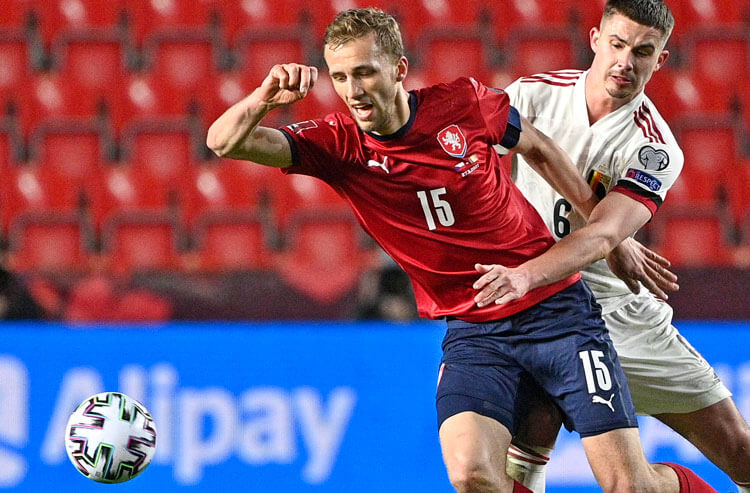 Scotland vs Czech Republic Euro 2020 Tips and Predictions: Scotland Returns to the Spotlight
Provided by