Preseason can so often feature shocking QB play but in Pittsburgh this weekend, we'll have not one but two QB competitions playing out. Our Seahawks vs. Steelers picks highlight how the two battles will impact the NFL betting outlook here.

Tonight sees a matchup between two squads who have both moved on from Super Bowl-winning quarterbacks this offseason.

The shadows of Russell Wilson and Ben Roethlisberger will hang over both the Seahawks and Steelers for some time, but this game gives us a chance to see the QB of the future for both teams.

For this game, you need to read our NFL picks and predictions for the Seattle Seahawks vs. Pittsburgh Steelers, with kickoff on August 13.

The spread has largely remained close since the lines opened with the Steelers only moving half a point from 3-point favorites to 3.5-point favorites. The points total has moved 2.5 points though, from 33.5 to 36.

Mike Tomlin is 34-24 as a coach in preseason games. Find more NFL betting trends for Seahawks vs. Steelers.

Seahawks vs Steelers picks and predictions

Both teams are undergoing a transition at quarterback, but what does that mean for Saturday’s preseason clash? Well, we know that for both teams, there is a live QB battle for that starting spot, that should mean we see a lot of all the candidates.

The Seahawks have Geno Smith and Drew Lock fighting for the role. Smith performed solidly when called upon last year and is, for now, ahead of the depth chart. Both will see time on the field, and the levels that they show in this game could help force the decision about who’ll start Week 1 to go their way.

There’s a QB battle in Pittsburgh, too, and Mike Tomlin has announced that, as expected, Mitch Trubisky will be starting on Saturday. He’ll be spelled by Mason Rudolph and rookie Kenny Pickett. Trubisky has said this week that it’s all about execution, and he’s right. All three men will have chances to prove themselves in this game and must put their best foot forward.

Throughout camp, it’s been said that Trubisky has been the superior QB, but with the draft capital put into Kenny Pickett, it’s certain that the team will want to see what he has in competitive action. That leaves Mason Rudolph, a solid QB but one who has never looked like a potential franchise solution. He’s due to be the first man up after Trubisky, but this drop to the third-string is surely a matter of time.

We won’t see much of either team’s offensive starters, with the talent in the skill positions likely to only see one or two series. Still, the quality of quarterback on both benches should mean that this remains competitive throughout.

Mike Tomlin has a strong preseason record as a head coach, at 34-24, and it’s worth noting that it’s only improved as time has gone on, with his record in the past four seasons sitting at 12-4. With that in mind, you have to back that Trubisky, Rudolph, and Pickett will be able to do enough for the hosts to cover.

Picking either side of the points total is always tricky, and in preseason that task is made even tougher. It’s telling, though, that the line has already moved from 33.5 to 36, and some sportsbooks are already posting 36.5.

We’ve touched upon the quality at the quarterback position and that really is the key here. We probably won’t see much of the defensive first string of either team, with the talent drop-off coming quickly.

That won’t be the case with the QBs, with Trubisky, Rudolph, Smith, and Lock all having had significant regular season action. For that reason, we’ll back the Over and hope that the talent under center keeps the scoring high.

We’ve spoken about the quality under center for the Steelers, but it really will be key here. In Trubisky and Rudolph, we have two players who have combined for 80 touchdowns in competitive action, plus Pickett, who threw for over 12,000 yards and 81 touchdowns in his time at Pitt.

For all the jokes around Rudolph and Trubisky, these are talented guys. They may not be players you can build a franchise around, but they have the ability to win games, and they should be able to do enough to lead the Steelers to a home win here.

Take the Steelers moneyline to play things a little safer than the spread. 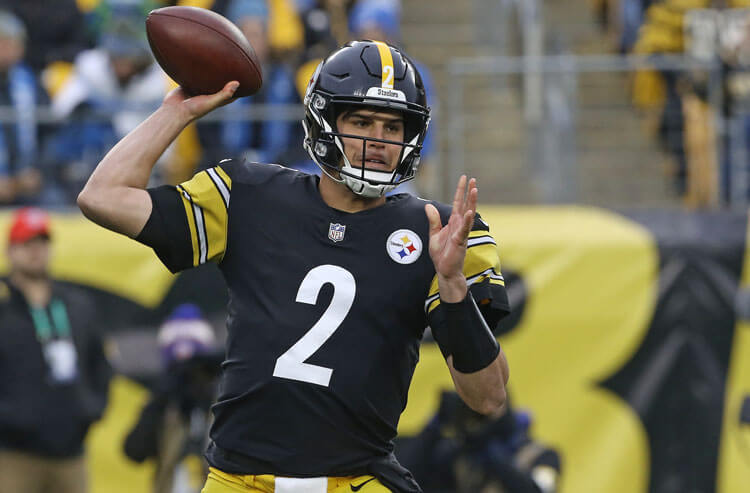