Vikings vs Raiders Preseason Picks and Predictions: Raiders on the Run

As the NFL's teams trudge through preseason uncertainty, the Vikings and Raiders will get to showcase what their new coaches bring to the table. Not only does Vegas already have a game under its belt, but a clearer path to NFL betting success Sunday.

The Minnesota Vikings face the Las Vegas Raiders in Vegas this afternoon as they look to kickstart their season. For the Raiders it’ll be their second game having beaten the Jaguars in the Hall of Fame game. It gives us our first chance to see Kevin O’Connell as an NFL Head Coach.

For this game you need to read our NFL picks and predictions for the Vikings vs. Raiders.

We’ve seen lots of movement on these lines so far. The points total has risen from 34 to 35.5 since opening, and the Raiders have grown from 2.5-point favorites to 4-point favorites.

The Over is 3-0-2 in the last five meetings between the teams. Find more NFL betting trends for Vikings vs. Raiders.

Vikings vs Raiders picks and predictions

The Minnesota Vikings face the Las Vegas Raiders in Sunday’s sole NFL preseason game. Let’s be honest, NFL Preseason isn’t always the easiest watch, and besides the hardcore fans and those looking for an edge in betting or fantasy, there often isn’t much reason to watch. That isn’t the case with this game, which offers us an opportunity to see how two new NFL head coaches are doing in their new roles.

Kevin O’Connell had a fleeting NFL career, playing only two games for the Patriots and spending the rest of his career as a backup or kicking around practice squads. His coaching career has been more accomplished though, spending time in Cleveland, San Francisco, and Washington before moving to the Rams and leading them to Super Bowl glory as their offensive coordinator.

There’s a Patriots connection with new Raiders head coach Josh McDaniels too, who has spent the bulk of his career on the Patriots staff under Bill Belichick. He’s a smart offensive mind, hence the success as OC in New England but his only spell as an NFL head coach in Denver was a failure. It’s been over a decade since then and he’s only grown as a coach, something which Raider Nation will be hoping has improved his ability as an HC.

The most notable roster news is that Kirk Cousins hasn’t travelled with the Vikings following a positive test for COVID-19. Whether he’d have played much, or even at all, is up for debate, but it gives Kellen Mond and Sean Mannion a clear runway. Both men have had questions raised over their abilities after a poor training camp, which means that both are in a real fight for this backup spot, especially given some of the experienced current free agents.

The exciting thing will be trying to see what O’Connell is looking for from the offense, even if it’s a basic version of the playbook being run by backups. On defense, we’ll probably see more potential first-stringers, with the likes of first-round pick Lewis Cine almost certain to get gametime, looking to build on a monster season at Georgia.

We still don’t have clarity over whether Derek Carr will see any part of the action on Sunday, but this is a man who hasn’t played a preseason game since 2019. That’ll leave Jarrett Stidham, Nick Mullens and Chase Garbers for the bulk of the work.

Despite neither team having a particularly capable backup, you have to learn towards the Raiders here, they have the best of a bad bunch in Stidham and Mullens, they’re an extra week into their preparation, and we saw an impressive preseason performance from then when they took apart the Jaguars 27-11.

This is a total that really could go either way, and there isn’t much of a lean. If pushed, I’d suggest taking the Over:

Most importantly, we know that the Raiders played well last week, scoring 27 points. The offense looked good, and the talent they had at running back was impressive.

We’ve seen the line rise from 34 to 35.5 and some places even have this at 36 points now. For that reason, I think you follow the money and grab the 35.5 while it’s still available.

Josh McDaniels had a poor preseason record in Denver going 2-6. We’ve spoken about the likelihood that Derek Carr doesn’t play, it’s also quite likely that we don’t see much, if anything, from Devante Adams. Despite that, I’m confident — as confident as you can be about preseason anyway — that the Raiders win this one.

My main reasoning all revolves around the ground game. The offensive line was good at run blocking last week and then, most importantly, we saw McDaniels give their running backs a lot of action against the Jags. Between the group, they got 159 yards on 33 carries. We even saw Josh Jacobs take the field and get five carries. It wasn’t Jacobs who really excelled though, but fourth-round pick Zamir White, who drew camp buzz and looks really exciting. He averaged 4.7 yards per carry against the Jaguars and could be a key weapon again here.

With a talented group of players, all capable of dominating on the ground, we could see the Raiders play smash-mouth football this Sunday — if they do that then I expect them to beat the Vikings. 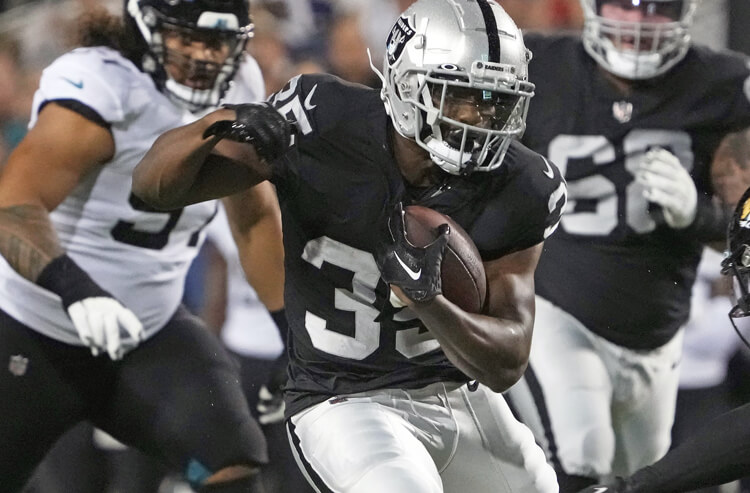 Vikings vs Raiders Preseason Picks and Predictions: Raiders on the Run
Provided by