AFC East rivals New England and Buffalo and their elite defenses go head-to-head on MNF. The Pats enter with a slight edge in the division but find out if they can get it done again tonight in our Patriots vs. Bills MNF picks. 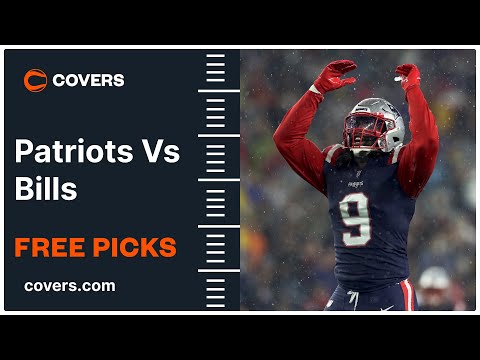 After a few ho-hum games on primetime, Monday Night Football in Week 13 features a fantastic matchup between the New England Patriots and Buffalo Bills.

Oddsmakers are expecting a close game between these AFC East rivals that are ranked fourth and sixth respectively in the latest Covers NFL Power Rankings. NFL betting lines opened with the Bills installed as 3-point home favorites before shortening to -2.5.

Here are our best free Patriots vs. Bills NFL picks and predictions for MNF action on December 6.

This line opened with the Bills as 3-point home faves with the Over/Under at 45. Early money has come in on the Patriots moving the Bills line to -2.5 while freezing rain and high winds expected for the game has made the total drop to 42.5

The Patriots are 14-3 ATS in their last 17 meetings in Buffalo. Find more NFL betting trends for Patriots vs. Bills.

Patriots vs Bills picks and predictions

After cruising to the AFC East title a year ago, this was expected to be another cakewalk to the top for the Buffalo Bills. They were loaded on both sides of the ball, led by an MVP odds favorite in quarterback Josh Allen, and most importantly weren't supposed to have any problems dealing with those pesky Patriots who were in rebuilding mode with rookie Mac Jones at QB.

Well, the rebuild under coach Bill Belichick appears to have happened almost overnight. The Patriots have won six straight games (going 6-0 ATS in that span) to take a half-game lead over the Bills in the division standings. Jones has surged to the top of the Offensive Rookie of the Year odds and has completed 79 percent of his passes for 715 yards, six touchdowns, and just one interception over New England's last three games.

The Patriots defense has been the biggest key to their success, allowing just 6.5 points per game over the last four games. New England ranks second in the league in defensive DVOA according to Football Outsiders and has a turnover margin of plus-13 during that six-game winning streak.

The Bills are no slouches themselves and are fresh off a 31-6 beatdown of the Saints. They are the league's highest-rated team in defensive DVOA, while their offense ranks 16th. That said, the Bills have produced some puzzling performances at times.

While they've destroyed inferior foes like the Saints, Jets, Dolphins, and Texas, they also fell to the woeful Jaguars, lost their home opener to a mediocre Steelers team, and were clobbered 41-15 by the Colts two weeks ago. They also lost shutdown cornerback Tre'Davious White to a season-ending injury in Week 12, which creates a hole that Belichick will no doubt try to exploit.

The big factor to monitor for this game will be the weather at Highmark Stadium, with freezing rain expected along with winds swirling at an average of 23 miles per hour. That could make this a very run-focused game, and while Allen is a threat with his feet, the rest of Buffalo's ground game is less impressive. Starting running back Devin Singletary hasn't rushed for more than 45 yards since Week 4, while Zack Moss is averaging just 3.5 yards per carry and might be getting phased out in favor of Matt Breida.

Meanwhile, New England's "running back by committee" approach is churning out 144 rushing yards per game over the last six games. With the Pats going 5-0 SU (4-1 ATS) in their last five games on the road, and also going a sizzling 14-3 ATS in their last 17 trips to Buffalo, back them on the spread.

We mentioned the messy weather in our ATS breakdown, but it's even more likely to affect the total which is why the Over/Under has plummeted from the opening number of 45.

These are the two best defensive teams in the league, with the Patriots allowing a league-low 15.8 ppg and the Bills just one spot behind them with 16.5 ppg. And while they have efficient offenses, neither play at a particularly fast pace, with Buffalo ranking 15th in seconds per play and New England ranking 22nd.

Nothing says low-scoring battle more than a matchup between a pair of elite defensive teams in gross weather in a rivalry game with a tense playoff atmosphere. Take the Under before it drops even more.

We mentioned that Allen is Buffalo's most reliable running threat and if the weather is as messy as expected he will need to pound out some tough yards on the ground.  Allen is third in the league among QBs with 383 rushing yards and averages 5.6 yards per carry.

The Patriots' defense has been vulnerable on the ground, allowing 115.8 rushing yards per game on 4.6 ypc. While they should be able to bottle up Buffalo's running back platoon, they'll have a tougher time containing Allen. Take the Over on his rushing yards total on Monday. 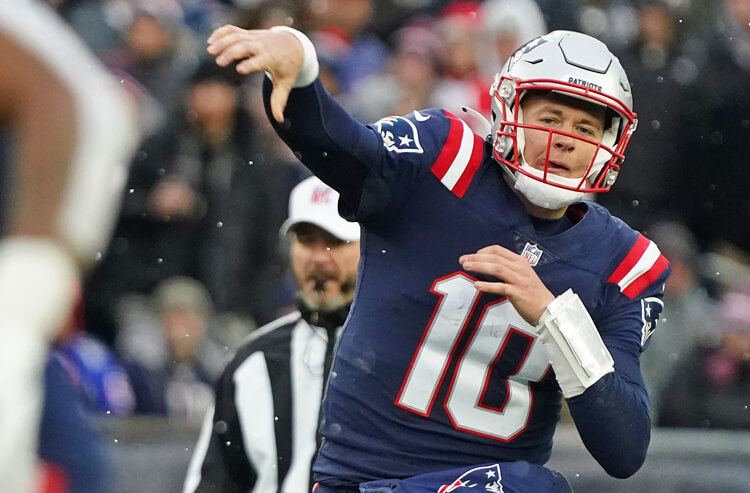